Big 7 softball teams back after shortened 2020

The cancellation of the 2019-2020 softball season hit all of the teams from the Big 7 hard, each team having their season ended just as district play was beginning. It was heartbreaking on a number of levels; no seniors would be able to finish their careers, players putting up big numbers would not see any more at-bats and teams off to good starts would not get the chance to reap the rewards of a district championship or playoff game. The start of this season was delayed as well when winter storm Uri ripped through the state just as teams were preparing for their season openers.
Despite the setbacks the Sharyland Pioneer Lady Diamondbacks and the Mission High Lady Eagles, two teams who were having great starts to their seasons in 2020, find themselves right back where they were at this time last year.
Pioneer kept their unbeaten start in District 31–5A play intact with a 9 – 6 victory over McAllen Rowe this past Tuesday night at Rowe High School thanks to a three run sixth inning that broke open a tie game and a solid pitching performance from Reaghan Staehely in relief.
“Our ace pitcher wasn’t having a great night,” said Pioneer head coach Orlando Garcia. “She had a great night Friday night and it just didn’t happen today. Fortunately we could switch and we were able to do that at the right time.”
Rowe, after scoring four runs to take a 6–4 lead in the bottom of the third inning, was threatening for more when Staehely was brought in. She proceeded to keep the Lady Warriors off the scoreboard for the rest of the night, throwing five innings of shutout ball while giving up only four hits. Staehely’s efforts, and that of her teammates, allowed the Lady Diamondbacks to tie the game in the fourth on a two out, two RBI double from shortstop Karisa Lopez. 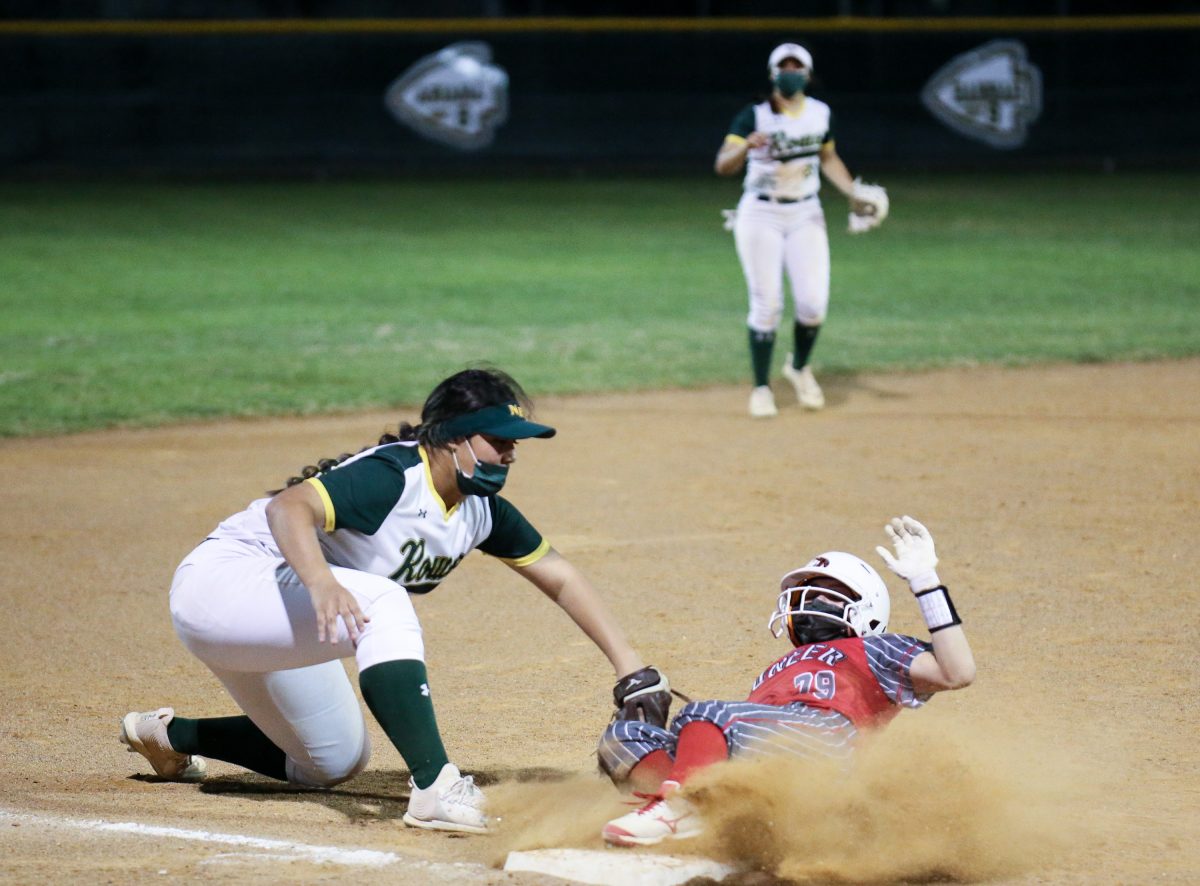 Lady Diamondback #79, Alondra Rodriguez, slides in to 3rd base as she is called safe. March 17, 2021 – Photo by: Mario Magallon

Pioneer took the lead for good in the sixth thanks to an inning opening triple from Alondra Rodriguez followed by an infield hit from Arianna Ale that scored Rodriguez. Ale and Lopez scored in the inning as well, courtesy of a passed ball and a sacrifice fly from Caitlyn Handy. Lopez went 4 for 4 at the plate on the night with three RBIs and helped the team put an end to Rowe’s big third inning with a diving stop of a hard hit ball to her right followed by a blistering throw to first to record the inning’s final out. Handy knocked in three runs as well. The win improved the Lady Diamondbacks to 4–0 in district, 8–3–1 overall. The team had a scheduled district game with Sharyland High yesterday and the result was not available at press time.
The Lady Diamondbacks returned seven starters from last year’s squad and nine of the ten players who started Tuesday night were a part of last year’s team. Still, the team is relatively young. Pioneer started only one senior to go along with five juniors, three sophomores and a freshman. Staehely, a sophomore, is in her first year on the varsity.

Despite the returning experience, Garcia took no chances when preparing a non-district schedule for this year’s team. “We’ve played some good non-district games against some teams that are doing very well in their districts,” said Garcia. “We did that on purpose so they would prepare us.” That preparation was evident on Tuesday as Garcia’s team battled back after losing the lead on two different occasions to hold off a determined Rowe squad who put at least one runner on base in every inning but one. 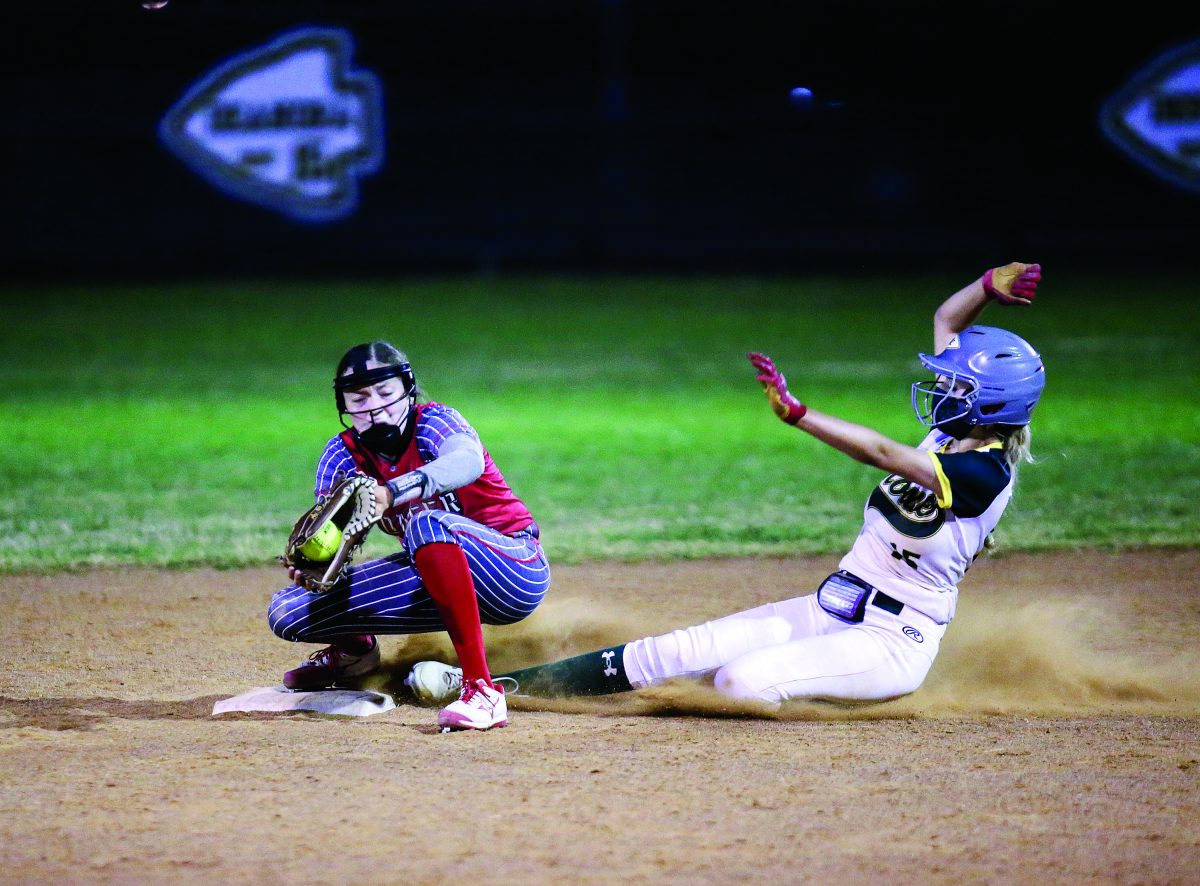 Arianna Ale, #8 of Pioneer, catches the ball at second base leading to opponent being called out. March 17, 2021 – Photo by: Mario Magallon

The Mission High Lady Eagles come into the 2021 season in a similar state to Pioneer. Most of the players from a strong 2020 team are back and with only a few seniors on their squad, they are relatively young, The team, however, like everyone last season, lost the chance to gain even more playing time when the 2020 season was shut down, a fact that concerned Coach Priscilla Aparicio as the team entered District 31–6A, a new district full of teams capable of making the postseason. “Our district is a very tough district,” said Aparicio. “We’re taking it one game at a time.”
Even so the team has managed a 5–1 start to district play, helped, according to Aparicio, by an extra-inning non-district loss to Mercedes two weeks ago. Aparicio used the game as a learning experience for her team to see if they had the chops to go up against a strong program. Despite the loss, Aparicio felt her team benefitted from the experience. “They (her team) walked away with that confidence where, it’s like, “All right, we can compete.” The Lady Eagles have won three straight district contests since the loss, improving their overall record to 7–2. The team had a scheduled district game with Edinburg Vela yesterday (result not available at press time) and are scheduled to host PSJA North tomorrow at 11 am.

It has been a tough start for most of the other softball teams in the Big 7 so far. The La Joya Lady Coyotes are currently 5–8 but have yet to win a game in District 31–6A after falling to PSJA High 5–3 on Tuesday. Both Juarez-Lincoln (also in 31–6A) and Sharyland High (31–5A) are winless on the season. The Lady Rattlers have lost their last two games by one run each.
In District 30–5A neither La Joya Palmview (2- 0) nor Mission Veterans (2–3) have started district play.