The company may be sold next month during a process supervised by a federal bankruptcy judge. If nobody wants to buy Hidalgo County EMS, though, the company may be divided up and sold piecemeal.

Palmview could bid for ambulances, equipment and contracts in western Hidalgo County during that process.

“Yes, there’s a possibility. And we’re open to it. However, again, we’re looking at it slowly and deliberately. It has to make fiscal sense for us,” said City Attorney Eric Flores. “We enjoy and love our neighboring cities, however, we’re here to serve Palmview residents first.”

“We’re fortunate enough that our EMS structure, the way it is, with us and Alton, that there’s a surplus,” said City Manager Michael Leo. “But that’s because we have the call volume to support it.”

If the city decided to expand service, the primary consideration would be financial.

“It all depends on the demographics of that area,” Leo said. “And that’s what we’re really trying to get at.”

The frequency of emergency calls, the number of ambulances required to respond, the distance from the nearest hospital and the percentage of the population with insurance would dictate whether or not Palmview could turn a profit.

Profitability is a major problem for ambulance providers in Hidalgo County. 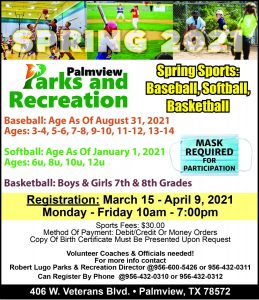 “From a business perspective, if you want to make money based on insured clients and speed of transportation, you’re not going to find it in our communities,” Caso told U.S. Bankruptcy Judge David R. Jones on March 19.

While he couldn’t make any promises, Jones assured Caso that both he and attorneys for the government are focused on avoiding a breakup of Hidalgo County EMS or any disruption in service.

Cities in western Hidalgo County also discussed the issue among themselves. While the talks remain preliminary, one idea under consideration is the creation of a regional, government-run ambulance service.

Palmview would form the nucleus of any regional ambulance service. It’s the only city in western Hidalgo County that already owns ambulances.

“We’re still in a discussion phase,” Flores said. “To determine where everybody is at, what everybody can contribute.”

If the deal makes financial sense, the City Council would determine how to move forward and set parameters for a potential bid.

“I don’t think we’re at that step yet,” Flores said.