It was a busy but productive week for Big 7 track teams as three different districts held their district track meets.
At the District 30-5A meet in Laredo this past Tuesday and Wednesday, the Lady Patriots of Mission Veterans could do little wrong in taking the district title with 214 points, 63 more than their nearest competitor.
The team, according to head coach Kathy Howell, dedicated the meet to last year’s seniors; eight athletes who never got the chance to have their district meet when the 2020 season was ended due to concerns over the coronavirus. “They (her team) dedicated it to them and we just kept reminding them all night, “Hey, do it for them, do it for them.” 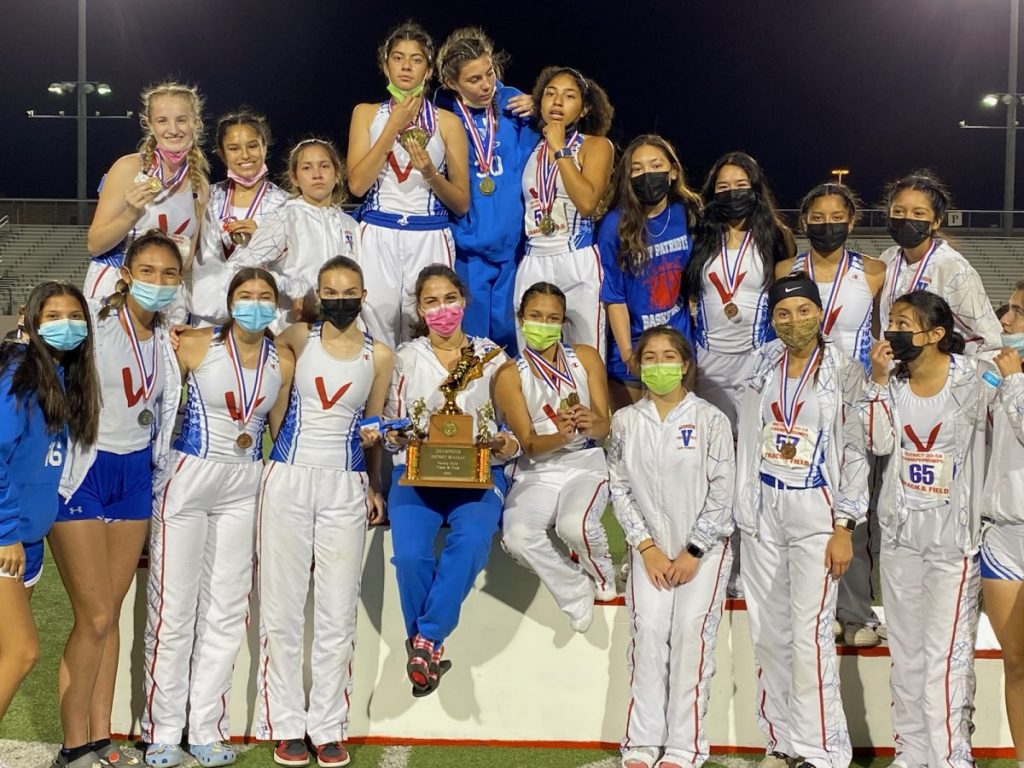 Howell also reflected on the season as a whole and how, not only her team, but every team, had to overcome so many obstacles in making it to the finish. “With the pandemic . . . these kids showed a lot of heart,” said Howell. “Showing up and the things they had to go through this year; that’s for everybody, the whole district.”
Howell went on to say how her team, after a solid start to the meet in the field events, started off the running finals with a less than satisfactory performance in the first race but didn’t let it affect them the rest of the night. “They fired right back,” said Howell. It started with a second place finish in the 800 meter run from Sarah Luna and continued the rest of the night. “They stepped it up and had really good performances in all of our races.”

Sophomore Carla Guerrero brought home five gold medals by winning the long jump, the triple jump and the 200 meters as well as running on the first place finishing 800 and 1600 meter relay squads. Rylie Barnett won the 400 meters, the high jump and ran a leg on each of the winning relay teams as well. The team also got district titles from Tara Madrid in the 100 meters and Jayden Longoria in the pole vault. Madrid also was a part of the 1600 meter relay and finished second to Guerrero in both the long and triple jumps. Halle Milam and Natalie Vidaurri were part of the 800 meter relay and Kailey Kaufman ran a leg on the 1600 meter relay.
Several teams finished their meets with second place finishes.
In Pharr, the Mission High Eagles used a number of strong individual performances to take the runner-up spot in the 31-6A meet in events run on Monday and Wednesday. Rogelio Aguirre won three events, the 800, the 1600 and the 3200 meter runs. Tajh Jones won the triple jump and the 100 meters. Jose Tovar won the 110 meter hurdles and Jose Ortiz won the shot put. Jones also finished second in the long jump and Tovar did the same in the 300 meter hurdles. Edinburg Vela won the 31-6A boys team title. 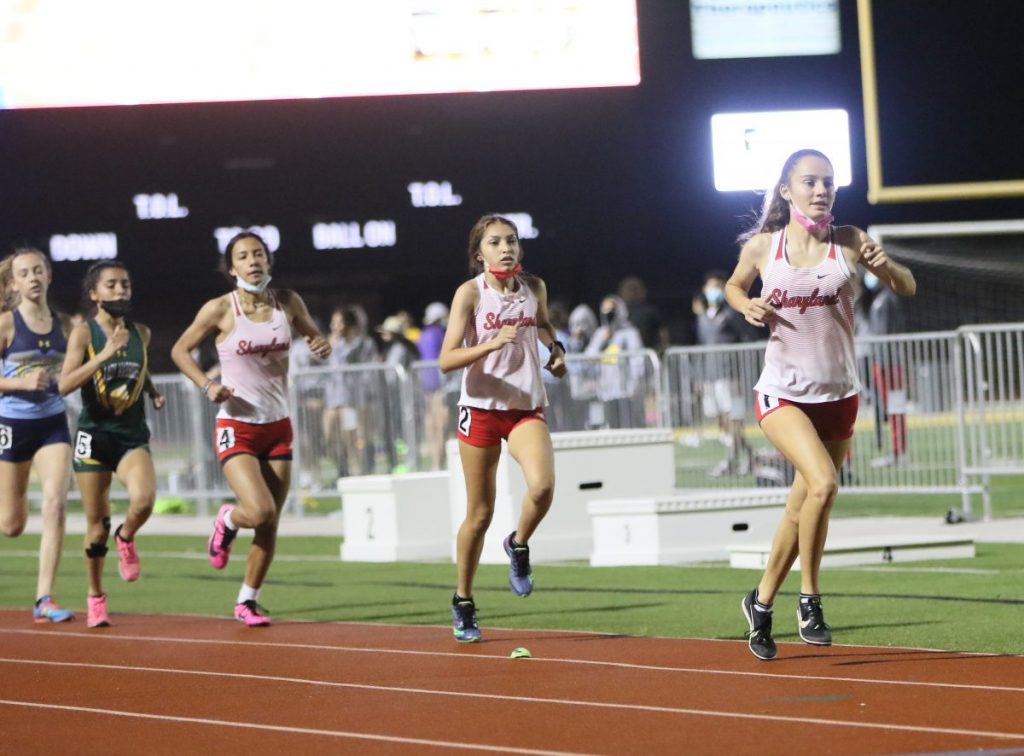 At the 31-5A meet in McAllen, the Sharyland High Lady Rattlers’ Danielle Salinas won the 1600 and 3200 meters runs and Haley Combs won the 100 meter hurdles to place second as a team behind McAllen High in events run on Monday and Wednesday. Salinas finished third in the 800 meter run as well. The team also gained points from a second place finish in the 1600 meter relay and a third place finish in the 400 meter relay. Daylah Vega finished in the top four in both the 800 and 1600 meter runs.

At the same site, the Sharyland Pioneer boys used first place finishes from Evan Thompson in the shot put and the discus as well as a first place finish from Rosendo Melendez in the pole vault to secure their second place team finish. The team also had a second place finish from Dylan Salinas in the 300 hurdles and a third place finish from their 1600 meter relay team. Cesar Ramirez finished in the top four in both the 1600 and 3200 meter runs. McAllen High won the boys 31-5A title as well.
The Mission Veterans boys team finished third in District 30-5A, one point away from second despite winning only one event the entire meet. That honor went to Jaythan Barrera in the 300 meter hurdles. The Patriots did however earn six individual runner-up finishes, among them Danny Alamilla in the 1600 and 3200 meter runs and JR Martinez in both the long and triple jump. The Patriots also had two second place relay finishes. Rio Grande City won the boys team title in District 30-5A.
In addition, six other athletes from the Big 7 won one or more individual district titles across the three different meets.
Sharyland Pioneer’s Daisy Monie won both the shot put and the discus for the Lady Diamondbacks at the 31-5A meet and her teammate, Brianna De los Reyes, won the high jump. The Sharyland Rattler’s Darrel Perkins won the triple jump in the boy’s division at the same meet.
La Joya Palmview’s Destiny Quintanilla won both the 800 and 1600 meter runs in the girls division of the 30-5A meet and Tony Villarreal had second place finishes for the Lobos in the 400 and 800 meter runs at the 30-5A meet in Laredo. Adan Torres won the high jump for the Lobos in the boy’s division.

Jovanna Cuellar won the pole vault in District 31-6A for the Mission High Lady Eagles.
Other notable performances came from La Joya’s Rebecca Rodriguez, who had second place finishes in the pole vault and high jump for the Lady Coyotes at the 31-6A meet, and Diego Heredia, who did the same for Sharyland High Rattlers in the 800 and 1600 meter runs in District 31-5A.
In all, a total of 13 of the 14 teams from the schools that make up the Big 7 had either individuals or relay teams finish in the top four in events in their respective district divisions, a feat that advances them to the area round of competition.