A proposal to shut down several La Joya Independent School District campuses proved so unpopular Wednesday that a majority of the school board immediately rejected it — without even waiting for administrators to start their presentation.

Administrators prepared a 42-page analysis, which covered everything from projected enrollment to operating costs. The school board,
though, swiftly rejected the proposal during a work session on Wednesday afternoon.

“There’s no reason why people that live in the La Joya ISD community shouldn’t have their kids here,” Cantu said. “Because we have great
programs, we have great education for the kids.”

“My decision was already made that I was going to try to defend every campus,” Salinas said.

“It’s not the right time. We’re in a pandemic,” Hernandez said. “We can afford to have less kids in classrooms, so they can catch up
easier. Whether we like it or not, actually, our kids did fall behind.”

Enrollment, however, remains a major problem for La Joya ISD. 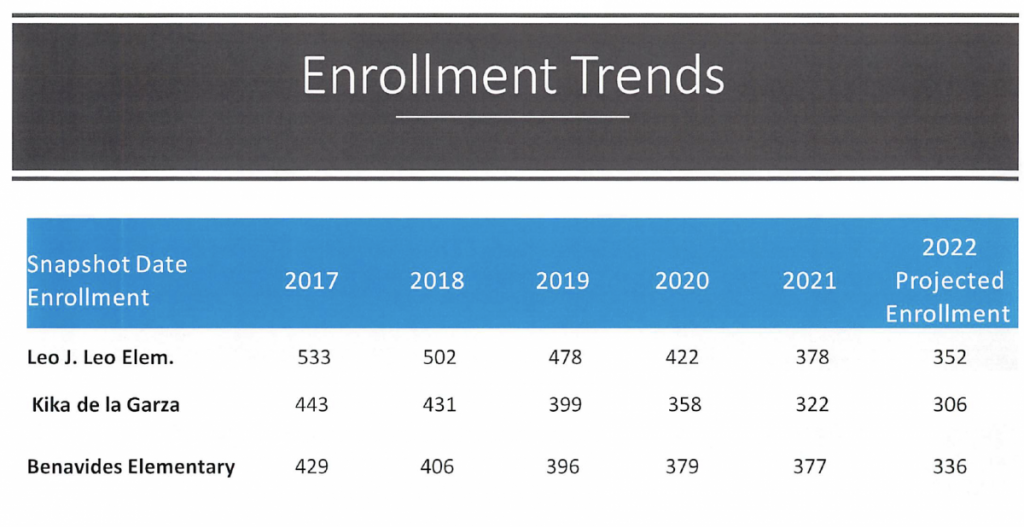 From 2017 to 2021, enrollment at Leo Elementary dropped from 533 students to 378 students, according to the analysis. La Joya ISD
projected that enrollment would drop to 352 students in 2022.

From 2017 to 2021, enrollment at Benavides Elementary dropped from 429 students to 377 students, according to the analysis. La Joya ISD
projected that enrollment would drop to 336 students in 2022.

The proposal noted that closing Benavides Elementary, which is located in a rural area north of Sullivan City, would hurt the surrounding
community.

“Benavides is situated in one of our district’s most underserved areas. Keeping Benavides open will allow that area to have access to
district resources,” according to the proposal, which noted that La Joya ISD also made the campus available for emergency shelter, after
school programs and community events. “If possible, we could relocate HOPE Academy to the Benavides building and continue to provide those resources.”

Salinas, who is from Sullivan City, opposed the plan to shut down Benavides Elementary.

De La Garza Elementary had the most serious problem with enrollment.