The La Joya Coyotes broke open a tight contest with PSJA High, scoring three runs in the top of the seventh to defeat the Bears 9-4 this past Tuesday night at C.V. Cain Field in San Juan and to claim the District 31-6A baseball title. The victory also allowed the team to remain undefeated on the season at 14-0.
The Coyotes entered the night with a two game lead in the district standings over the second place Bears knowing a victory would give them the championship, their first since they shared one in 2016. The game started like this one might end early with the Coyotes scoring three times in both the first and second innings to take a 6-0 lead while leaving multiple runners on base in each frame. 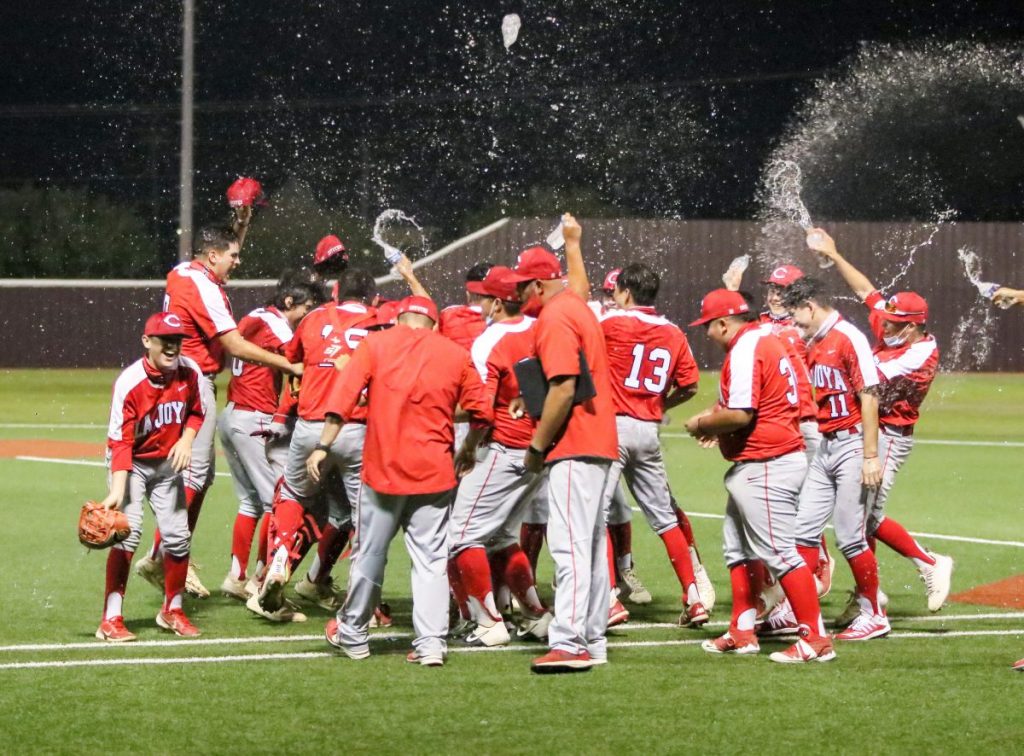 Angel Solis’ single in the first plated the first two runs of the night after Alan Delgado walked to open the game. Mario Salinas followed with a base hit and the two moved into scoring position on a Hugo Cantu sacrifice bunt right before Solis delivered his hit.
A combination of walks, hits and some defensive miscues led to three more runs for the Coyotes in the top of the second that included a run producing sacrifice fly from Jose Gutierrez. The Coyotes sent eight batters to the plate in both innings.
The lead was quickly cut in half with three runs by the Bears in the bottom of the second courtesy of a hit batter and three walks as Solis struggled on the mound. A big double play, started by Delgado from his shortstop position, helped put a pause to the threat before Solis recorded a strikeout to end the inning. Solis ended four of the six innings he pitched with strikeouts with perhaps the biggest coming in the bottom of the fifth.
With two outs and two runners on base Solis battled back from a 3-1 count to blow two strikes past a Bears hitter and help the Coyotes maintain their 6-3 lead.
He ended another threat in the bottom of the sixth when, with the lead down to two and a runner on base, Solis recovered from a hard hit ball off his glove; coming off the mound to field it and give himself time to fire a strike to first for the final out of the inning.
Solis got the Coyotes three run seventh started with a double to right centerfield and J.R. Ramos provided the big hit with a two-out, two RBI hit to give the Coyotes some breathing room.

J.C. Gutierrez came in to pitch for the Coyotes in the bottom of the seventh, ending the game with a strikeout of his own, and sparking a celebration befitting of a team that hasn’t had any part of a district title in several years. Since the shared title in 2016, the last outright title for the Coyotes came in 2008. It was also the first title for fifth year head coach Mario Flores.
“I can’t find any words,” said Flores, “but I’m super happy. I’m very proud of the young men.”
Solis, a member of the Coyotes varsity for four years, also spoke about getting a district title. “We worked hard for this; every single day, just grinding and grinding, going for the undefeated season and going for district champs and it feels good to achieve that.” The Coyotes do have two regular season games left beginning tonight when they host Juarez-Lincoln at the La Joya ISD baseball complex.
The Coyotes entered the year with a total of eight starters back from last season, something that has allowed Flores to roll out similar lineups game after game this year and the results have been impressive. “Our goal is to win every inning,” said Flores, “and if we do that we’re going to be successful.”
While the Coyotes may not have won every inning so far they have yet to trail in any of their first 14 games. Flores credited much of the success to the efforts of his three pitchers (Solis, Gutierrez and Cantu) as well as pitching coach Wally Barrera. “They’ve been doing a great job . . . and our hitting has been pretty good.” 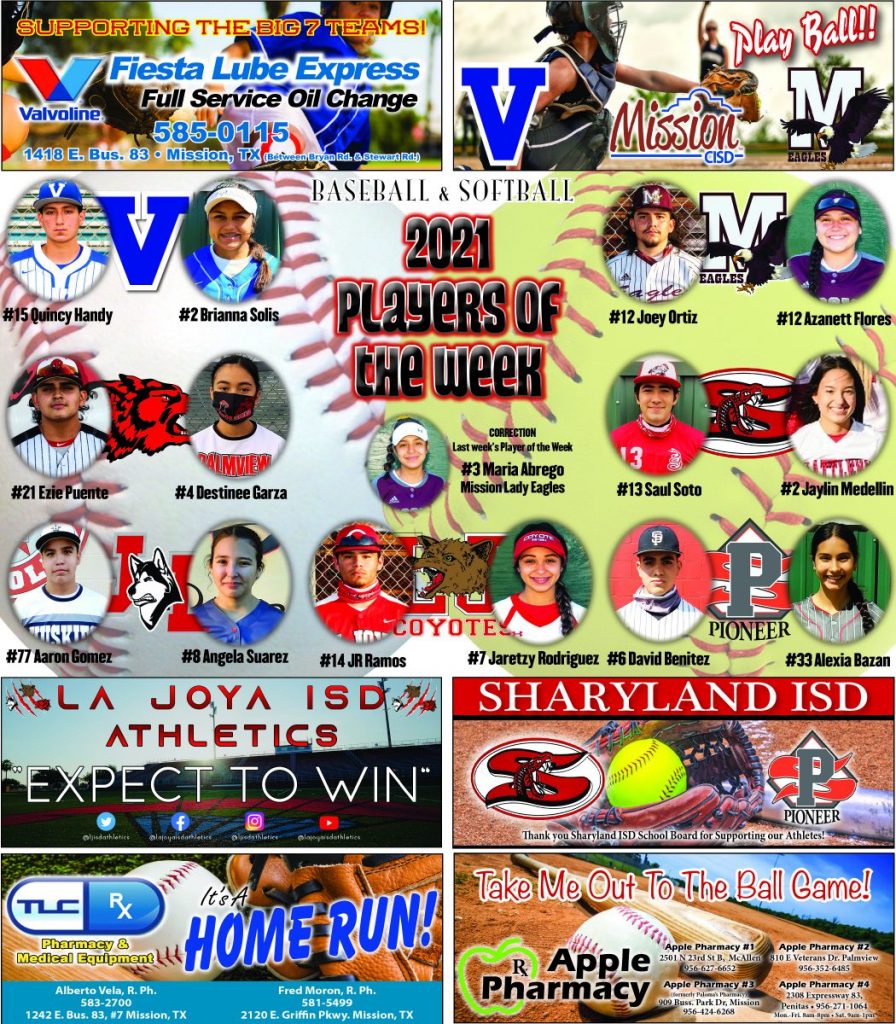 Both were on display in the win Tuesday as the Coyotes battled through a tight game on the road against an opponent that will also be part of the 2021 postseason.
Besides the Coyotes big win, there are several other Big 7 schools in position for either a district title or a playoff spot as the 2021 regular season winds down.
In District 31-5A, the Sharyland Pioneer Diamondbacks maintained their first place tie with McAllen High with a 11-1 victory over Valley View on Tuesday while the Sharyland Rattlers held firm to third place in the standings with a 6-1 victory over McAllen Rowe. McAllen High and Pioneer are each 9-1 in district play and the Rattlers are 8-2. Both the Diamondbacks and Rattlers have clinched playoff spots. After each play tonight, the two teams are set for another one of their highly anticipated meetings next Tuesday night at Sharyland High.
In District 30-5A, the La Joya Palmview Lobos are headed back to the postseason as the district’s second place team. The Lobos are currently 7-2 with one game left after defeating Laredo Martin 2-0 on Tuesday night. Mission Veterans fell 11-3 to league leading Rio Grande City to remain tied with Martin for fourth place in the district with a 3-6 record. The Patriots have one regular season game left as well.
Postseason play for any of the teams that qualify is scheduled to begin in early May.