With four of the seven varsity softball teams from the Mission, Sharyland and La Joya school districts, the Big 7, having either already clinched a playoff berth or being just one win away from doing so, the second season, as the playoffs are often referred to, should be an exciting one for Big 7 softball fans. The three teams that have clinched playoff berths are all in 5A. They are the 11-1 Sharyland Pioneer Lady Diamondbacks, the 7-2 Palmview Lady Lobos and the 6-3 Mission Veterans Lady Patriots. The team that needs to win one more game to punch their ticket into the playoffs is the 9-6 Mission Lady Eagles.

With the Lady Eagles having played their final District 31-6A game last night, after press time, it is possible that they have already clinched as well. That’s because going into that game, they were in a “win and you’re in” scenario. However, they were scheduled to take on 12-2 Edinburg Vela, so they may have fallen to the Lady Sabercats. If that turned out to be the case, they would find themselves in a three-way tie for the district’s fourth and final playoff spot with 9-7 PSJA and 9-7 Edinburg High. And as of Wednesday evening, Lady Eagles head coach Priscilla Aparicio was still waiting for a decision on how that three-way tie would be broken.

Therefore we will take a look at the three teams that have already assured themselves of post season play; Pioneer, Mission Vets and Palmview.

Heading into their game last week against the Nikki Rowe Lady Warriors, the Lady Diamondbacks were cruising through their District 31-5A schedule with a 10-0 record. However Coach Orlando Garcia’s Pioneer squad hit a bump on the road to a district championship, and a possible undefeated season, when they fell to the Lady Warriors by a score of 5-3. 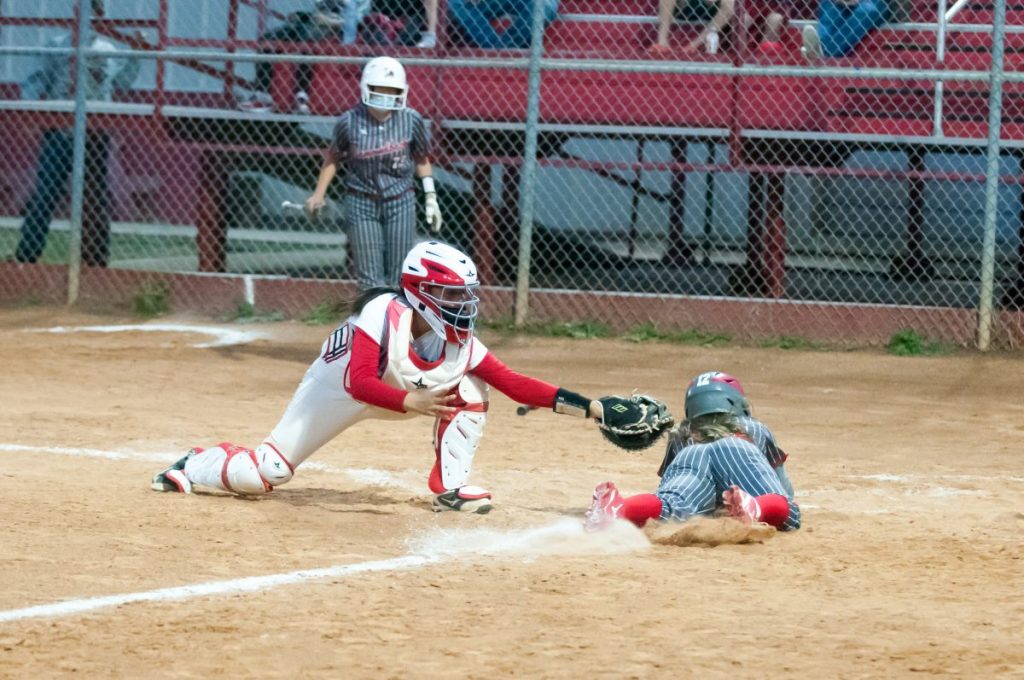 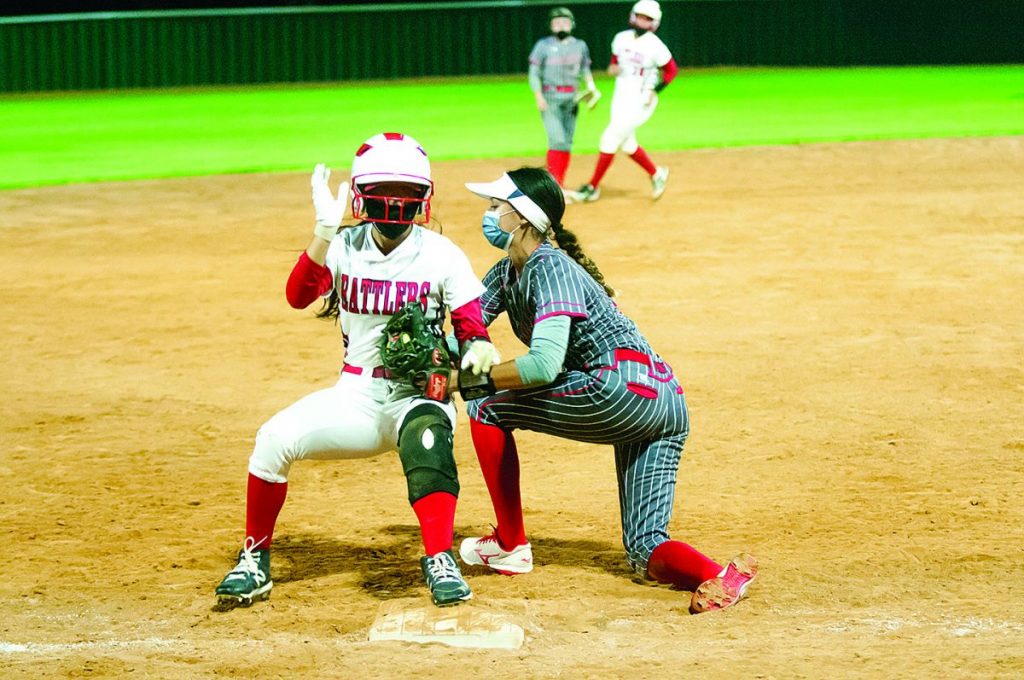 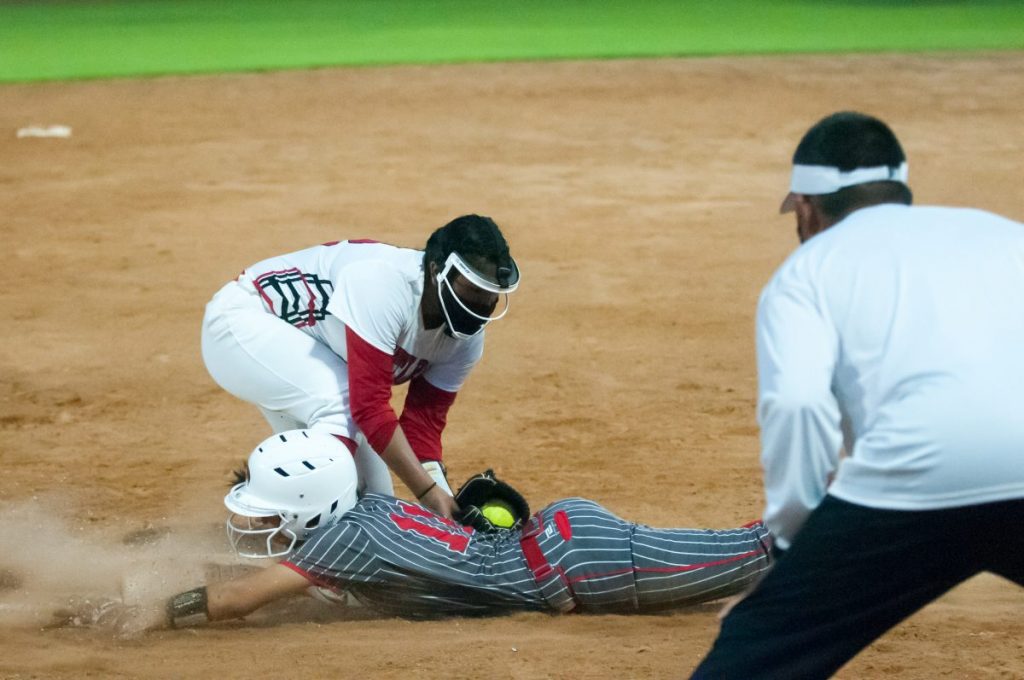 Fortunately for the Lady Diamondbacks, and their fans, they got back on the winning track Tuesday evening when they defeated their cross-town rivals, the 0-12 Sharyland Lady Rattlers, by a score of 6-0. In that game, Pioneer got off to a slow start as the game remained scoreless through four innings before the Lady Diamondbacks plated four runs in the top of the fifth, and single runs in both the sixth and seventh innings, while continuing to shut out the Lady Rattlers, for their 11th win of their district schedule.

Next up for Pioneer is tonight’s game against the 11-1 PSJA Memorial Lady Wolverines. Despite the fact that both teams will have one game remaining on their schedules, this will most likely be the game that will decide the district championship.

As Garcia explained immediately after the win against the Lady Rattlers, tonight’s game is for all the marbles.

“Today we got a late start,” Garcia said. “It was not the start that we wanted, but nonetheless it’s a win. I think that they were looking forward to Friday’s game against PSJA Memorial, but as I told the girls, ‘We need to take it one game at a time, and if we win out, we’ll win the district.’ Now we can focus on Friday’s game and we’ll see what happens.”

Tuesday the then 6-2 Mission Veterans Lady Patriots went into their game against the then 7-1 Rio Grande City Lady Rattlers with their sights set on a district title of their own. Unfortunately for Lady Patriots’ head Coach Vivian Ray and her girls, those aspirations were soon squelched as the Lady Rattlers scored four runs in the top of the first inning and nine more in the fifth, while shutting out the Lady Patriots’ offense, en-route to a 13-0 five inning victory. While the result of that game was extremely decisive, it was in no way indicative of the kind of season Mission Veterans has had. 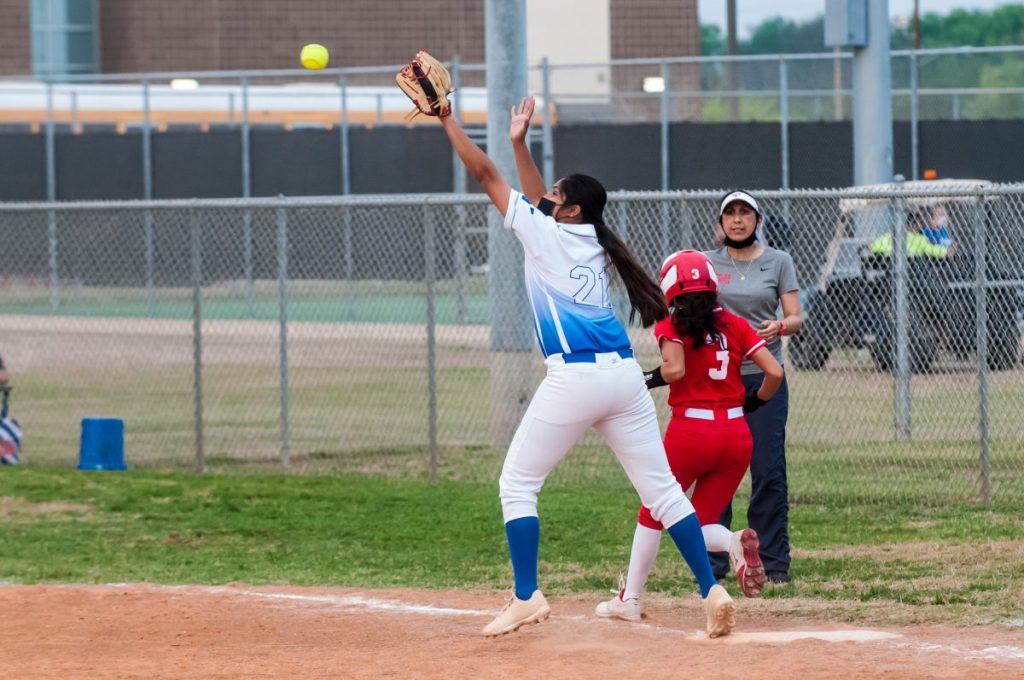 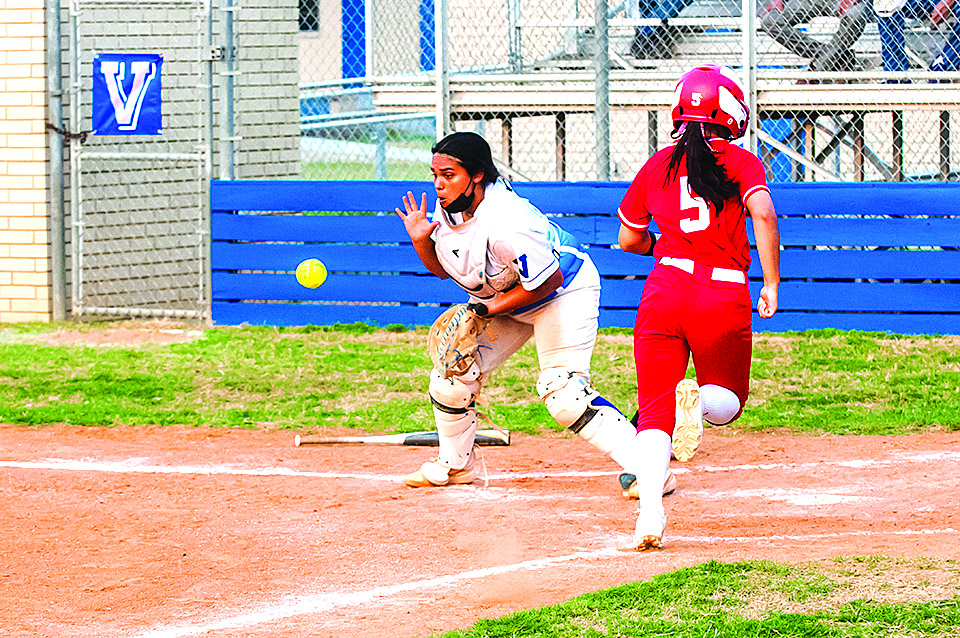 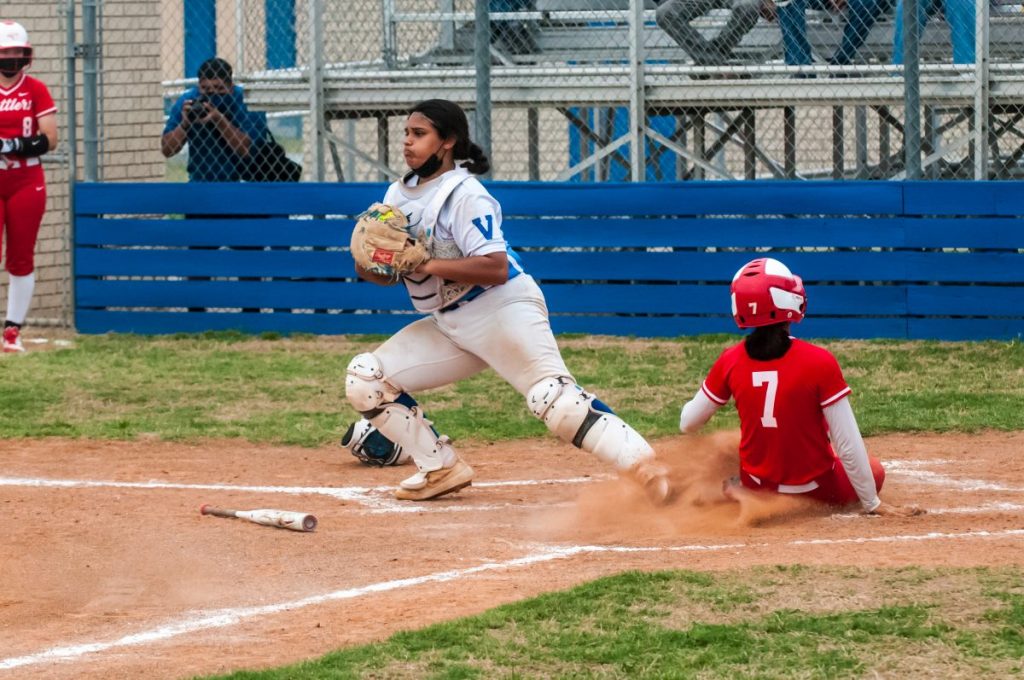 “I think what has made us successful is the fact that my players have bonded very well and very quickly,” Ray said. “Some teams have this slow motion of getting together but my girls had this chemistry from the get-go. I think that it has to do with the fact that the juniors that are coming back from last year’s varsity already knew each other and they really blended well with the kids that I brought up from the J.V.”

With eight juniors and four sophomores on the roster, the Lady Patriots are a fairly young team. That includes their battery of pitcher Jazmine Villarreal, who is a junior, and catcher Alyssa Guzman, who is a sophomore. Guzman is actually a team captain, as is junior shortstop Kayla Mendoza.

Tonight the Lady Patriots will be hoping to end their District 30-5A schedule with a win over 1-9 Laredo Cigarroa. Should they do so and should the Palmview Lady Lobos fall to Roma, tonight as well, Mission Veterans and Palmview will end the regular season in a two-way tie for second place with 7-3 records. Otherwise the Lady Patriots will enter the playoffs as the third seed in the district.

It’s already been a historic season for the Palmview Lady Lobos. By clinching a playoff berth, Coach Jessica Cardenas-Russell’s team has become the first Lady Lobos team in Palmview High School history to qualify for post season play. And while a share of the District 30-5A title is still a possibility for the Lady Lobos, Cardenas-Russell knows that in order for that to happen, not only would her team need to defeat the 4-5 Roma Lady Gladiators tonight, but the 8-1 Rio Grande City Lady Rattlers would also have to lose to 2-7 Laredo Martin at home. 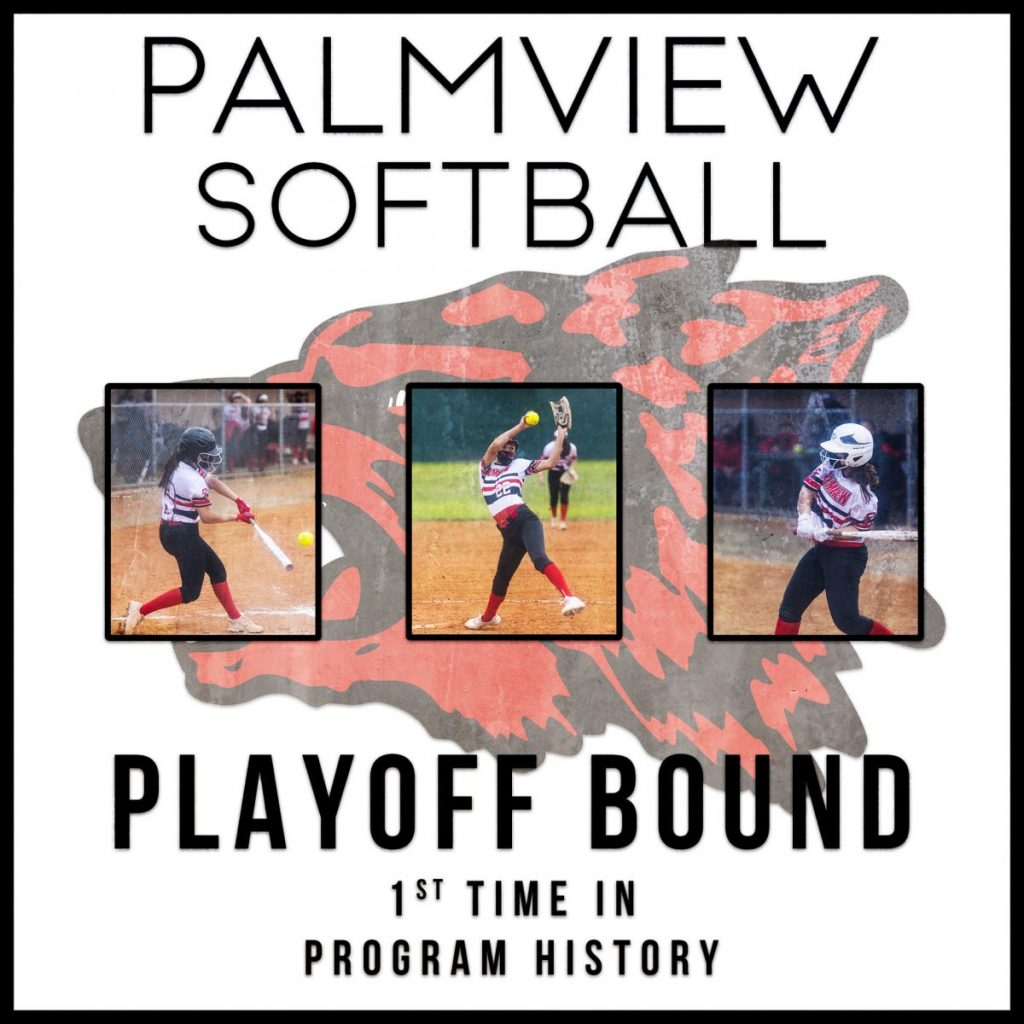 “It’s all based on how Rio (Grande City) will finish their season,” Cardenas-Russell said. “That’s pretty much the determining factor. We have Roma coming up and hopefully we can finish on a good note with another win at home. But it would be wonderful to be able to split a district title with Rio, but pretty much the ball is in their court on that aspect of it. But it would be amazing if we could pull that (a co- district championship) off.”

“This season has been one for the books for the girls,” Cardenas-Russell added. “Especially for my seniors who have been through some of the hardest downs in our season and honestly I am very, very happy that we’ve been able to do this for these seniors for this year. We have a pretty young team, especially at the very critical positions, but my seniors have really, really been good leaders for them. So even if we don’t get a share of the title, coming in second is awesome also.”