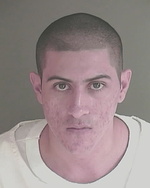 Yesterday morning, McAllen Border Patrol Station (MCS) agents working near Granjeno arrested a Salvadoran national, later identified as Moises Umana-Umana, after he illegally entered the United States. Record checks for Umana-Umana, revealed a previous arrest by the Harris County Sheriff’s Office in Houston for sexual assault of a child. The subject was found guilty and sentenced to two years confinement.

Minutes later, MCS agents apprehended a group of 16 aliens near Los Ebanos. All subjects were taken into custody and transported for processing. During processing, record checks revealed one of the subjects, a Guatemalan national was previously arrested in 2014 for rape by the Culpeper Police Department in Culpeper, Va. The individual was subsequently found guilty.

All subjects are being processed accordingly.