A woman accused of scamming people in western Hidalgo County pleaded not guilty to theft Wednesday.

During the hearing, the Hidalgo County District Attorney’s Office informed Cuellar that another theft case against Flores — her fourth during the past five years — is pending.

“Every time we seem like we get a new arraignment, we have a new arrest,” Cuellar said. 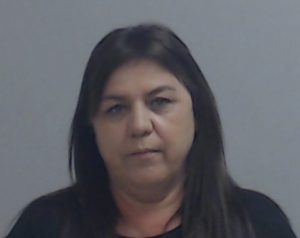 Flores is accused of preying on people with legal problems, according to court records from Mission and Palmview. In exchange for cash, Flores promised charges would be dropped or people would be released from prison.

In October 2016, a man filed a complaint against Flores with the Mission Police Department.

His son had been arrested in July. Flores claimed she worked at the “federal building” and “would talk to the Judge to have his son’s charges dismissed,” according to Mission Municipal Court records.

The man paid her $3,500. After he complained the charges hadn’t been dropped, Flores returned $500.

State District Judge Jaime Garza sentenced Flores to two years in jail, but he suspended the sentence and placed her on community supervision for three years.

The suspended sentence allowed Flores to avoid prison as long as she didn’t commit any new crimes.

The District Attorney’s Office filed a motion to revoke her community supervision in November.

“Everybody’s frustrated and they still think that she’s being protected by someone,” said Reynaldo Cardenas III of La Joya, who accused Flores of stealing $14,000 from his wife.

Several people who accused Flores of scamming them didn’t contact the police. Some felt embarrassed. Others worried they would be arrested for attempting to improperly influence the legal process.

Cardenas, though, wasn’t afraid. He went public and found himself flooded with stories about Flores.

Cardenas said he was concerned that judges set low bonds or released Flores on personal recognizance bonds, which meant she never spent a significant amount of time in jail — and could keep scamming people.

“She hasn’t even slept the night in jail,” Cardenas said.

Attorney Artemio De La Fuente of Edinburg, who represents Flores, said she’s concerned that Cardenas is linked to all the cases.

“She feels extremely strongly that there’s a personal vendetta,” De La Fuente said. “These people did not come forward on their own.”

“We are waiting for all cases to come in, we are waiting for the last case to be indicted, so that Ms. Flores can have her day in court,” De La Fuente said. “And all the evidence can be out.”