Agents charged Andres “Andy” Morales, 42, of Mission with making false statements when he purchased firearms in 2017.

“Andy’s name comes up a lot in a lot of deals as a behind-the-scenes mover and shaker,” said attorney Javier Peña of Edinburg, who keeps tabs on western Hidalgo County politics.

ATF Special Agent Deon Washington and Angela Dodge, a spokeswoman for the U.S. Attorney’s Office for the Southern District of Texas, confirmed that Morales had been arrested.

The Texas Department of Public Safety assisted the ATF, according to Lt. Christopher Olivarez, a spokesman for the South Texas Region. 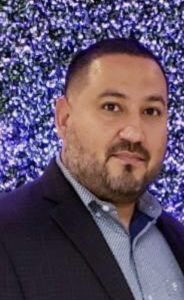 Together with members of the Agua Special Utility District board and the Peñitas City Council, they formed a political coalition that dominated western Hidalgo County politics during the past six years.

“It was different players for different situations, but it was always the same group,” said attorney Rick Salinas of Mission.

Rick Salinas investigated the Peñitas coalition in 2018, when he represented his father, former Mission Mayor Norberto “Beto” Salinas, in an election contest.

Armando “Doc” O’caña had defeated Beto Salinas during a runoff election. Members of the Peñitas coalition, including Morales, donated money to O’caña during the runoff.

Rick Salinas accused Morales and other members of the Peñitas coalition of supporting a conspiracy to steal the election. He filed an election contest and requested a new runoff election.

“I think the 2018 race was something they needed to win to expand their influence,” Rick Salinas said. “We’d never seen anything like that before.”

While the election lawsuit transfixed Mission, the case had little impact on western Hidalgo County.

Morales contributed thousands to candidates aligned with the Peñitas coalition and played a key role in their political campaigns.

He served as treasurer of the Liberty Executive Committee, a political action committee that supported candidates in western Hidalgo County. The committee spent nearly $69,000 in 2017 without filing a single campaign finance report.

In 2015, when Lopez became mayor, Peñitas created a chief of staff position for Morales. The position, which started as a five-month contract, became a full-time job with a salary of nearly $66,000.

Morales remains employed by Peñitas, which hasn’t suspended him or placed him on any type of administrative leave.

“All the tasks that he was working on are being delegated to other employees,” said Peñitas City Attorney Jose L. Caso.

Peñitas is waiting for more information, Caso said, before making a decision about Morales.

His connections go beyond politics.

One of his brothers, Alejandro, is the assistant police chief in Peñitas. Another, Daniel, is the district director for state Rep. Oscar Longoria. And his brother-in-law, Homer Tijerina, is the president of the Agua Special Utility District board.

Morales and Tijerina, though, don’t see eye-to-eye on politics. They’ve been at odds for years and supported rival slates in the November 2020 utility board election.

When they weren’t campaigning, members of the Peñitas coalition partnered on business deals and hunted together.

RGV Redlight worked in conjunction with Government Asset Services, a company owned by Peñitas City Manager Omar Romero. They partnered on a proposal to create a police department for the Valley View Independent School District.

Members of the Peñitas coalition also hunted together at the Santa Cruz Ranch in Starr County.

A photo gallery published by the ranch shows Garza, Romero, Lopez and Morales posing for trophy photos with exotic animals. Morales is holding a hunting rifle.

Under federal law, anyone convicted of a felony may not possess firearms or ammunition.

Morales pleaded guilty to possession of more than 5 pounds but less than 50 pounds of marijuana, a third-degree felony, in March 2001, according to docket information published by the Hidalgo County District Clerk’s Office. Morales received deferred adjudication, which allowed him to avoid a conviction.

Documents from the 20-year-old case haven’t been scanned and uploaded to the Hidalgo County court records system.

Morales pleaded guilty to possession of more than 50 pounds but less than 2,000 pounds of marijuana, a second-degree felony, in August 2006.

What prompted the ATF to scrutinize Morales remains unclear.

“In connection with an investigation,” the ATF obtained forms that Morales signed when he purchased guns in 2017, according to the criminal complaint against him.

Morales bought the guns at Glick Twins in Pharr. He filled out ATF Form 4473, which asks a series of questions designed to weed out people ineligible to purchase firearms.

The form asks: “Have you ever been convicted in any court of a felony, or any other crime for which the judge could have imprisoned you for more than one year, even if you received a shorter sentence including probation?”

“MORALES’s false statement on the ATF Form 4473s regarding his status as a convicted felon was a fact that was material to the lawfulness of the sale of firearms by Glick Twins,” according to the criminal complaint. On Tuesday, when he was arrested, “Morales informed ATF Agents that he was working on his pardon but never got it.”

The criminal complaint doesn’t provide any details about the investigation that prompted agents to review his four-year-old ATF forms.