The 2020-21 high school sports year is winding down for the teams of the Big 7 with only the La Joya Coyotes baseball team still in competition. This doesn’t mean that all of the remaining schools athletes are off until August however. Many of the sports that are contested during the school year are still played after their respective University Interscholastic league (UIL) seasons have reached their conclusion. It is very likely that athletes from the Big 7 were out somewhere this past week playing basketball, volleyball or 7-on-7 football to name a few of the possibilities. 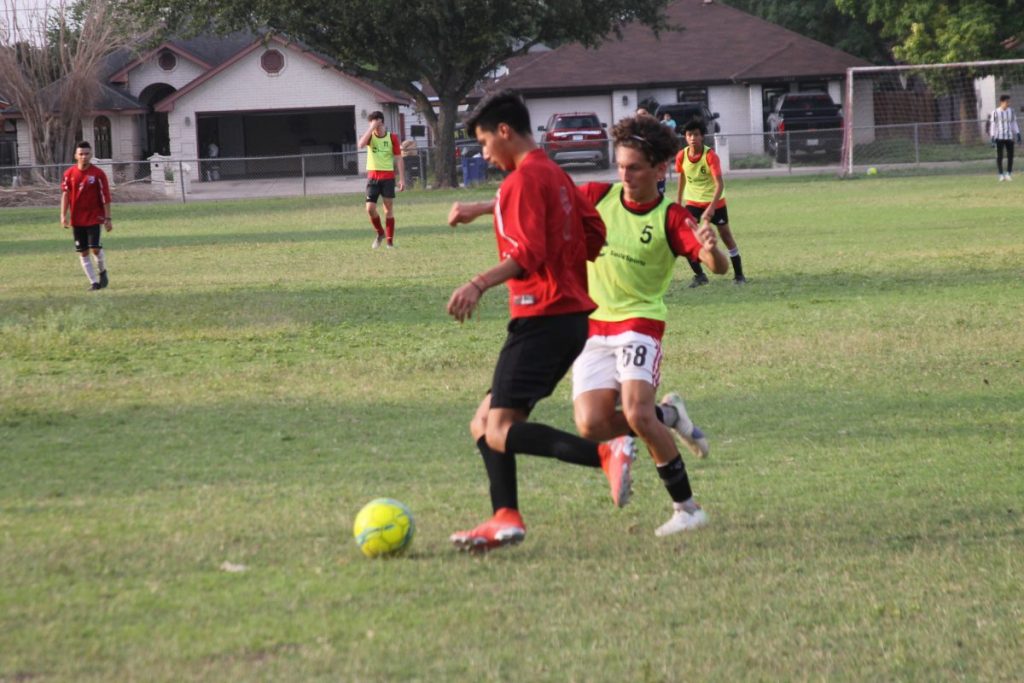 Soccer is another of the options; one that just became more available thanks to a couple of men who decided the needs of local high school aged soccer players were not being met by any local organizations once these athlete’s school seasons had finished. That need led to the creation of the RGV Area Soccer Association (RASA), a league for boys and girls teams that recently started play at Los Encinos Park in McAllen.
“We saw a need for high school and junior high soccer,” said Zeke Morales. “We know there are some leagues out there, but nothing is as organized as we wanted it to be organized.” After discussions with other high school coaches (Morales is the boys coach at Hidalgo High School), Morales and Paul Trevino, a local McAllen businessman and soccer proponent, proposed the idea to the city of McAllen, basically asking the city what they could do to help. “The City of McAllen jumped on it; they were very supportive from day one,” said Morales. That support mainly involves the use of fields at locations like Encinos that the league needs in order to operate. 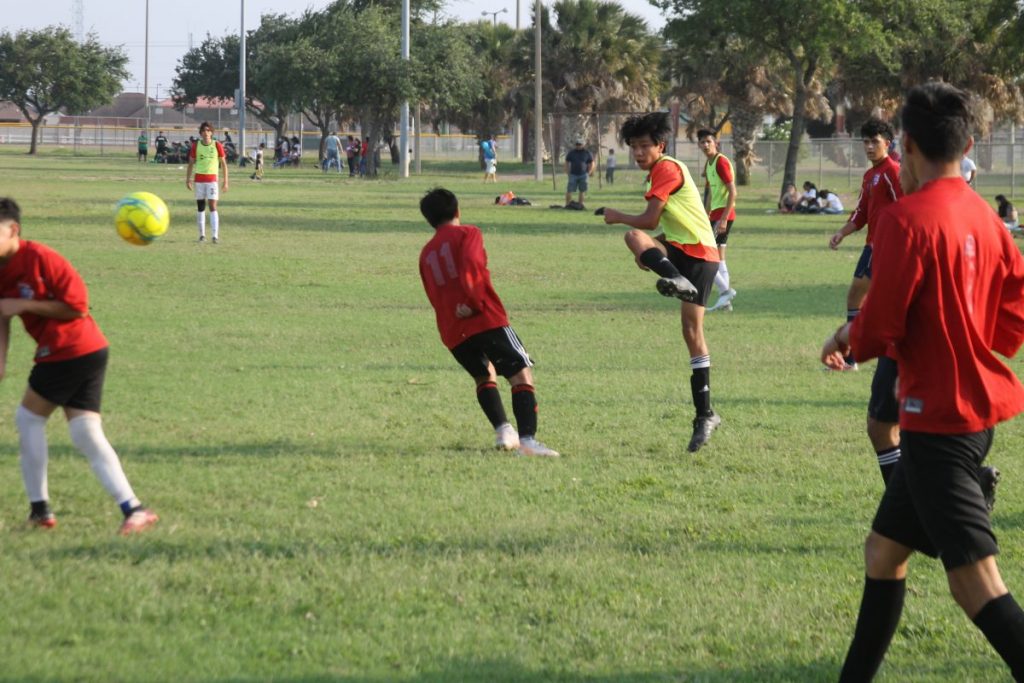 With the city’s backing the league is now up and running, holding games on Tuesday nights for boys’ teams and Thursday nights for girls. The boys division features local teams from Mission High, Sharyland High and Sharyland Pioneer. Teams from La Joya Palmview and Sharyland are part of the girls division.
This past Tuesday night saw six games being played at Los Encinos on three fields involving over 100 players. There were parents and fans out in support as well as a few local high school coaches there to see their own teams play. (The UIL prohibits high school coaches from coaching their own teams outside of the school year.) One such coach was McAllen High’s boys coach Fernando Segovia. He spoke about the importance of the league.
“I think it’s great that we are able to get the kids out here. Getting them back in action and just having them play soccer again. This year was tough.” 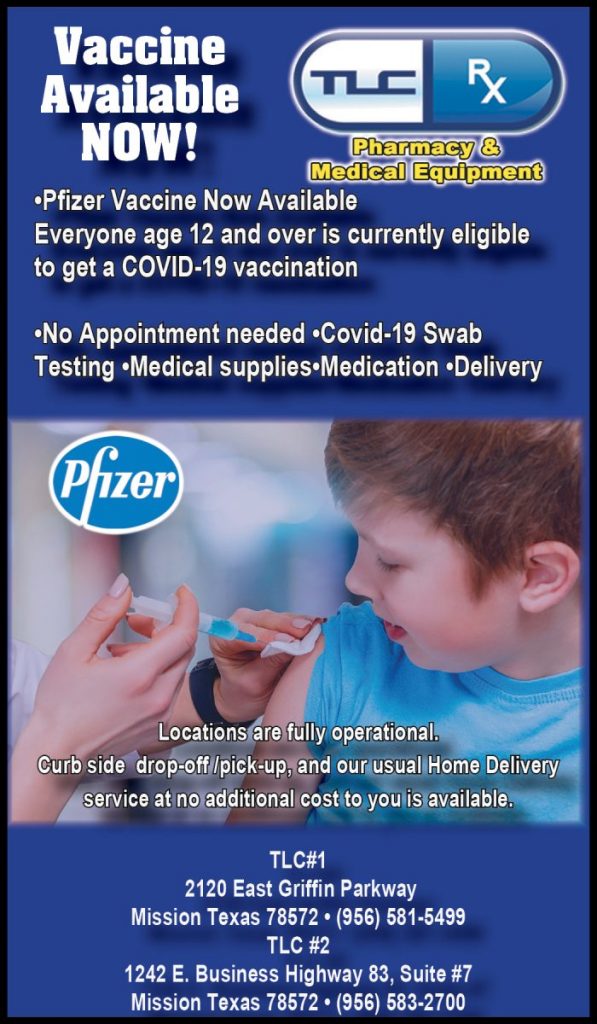 Segovia was referencing the lack of opportunity that many non-varsity players had this year to compete due to the pandemic and the challenges it presented. I saw many of those challenges play out covering the Big 7 soccer teams this past season and , more recently, by spending a few hours a day observing a local high school program operate their off season school day athletic period workouts over the course of a week. Like Segovia said; getting kids back on the field is a big deal.
“This league is helping getting them get back out and getting them ready for next year,” said Segovia.
RASA doesn’t plan on going away after this current season either. There are already plans in the works for a summer tournament putting the best teams of the Valley up against others from the rest of the state as well as a fall schedule with 16 teams. According to Trevino there is an additional goal.
“My goal is to maintain these kids actively so that we can bring another state championship to the Valley in UIL. If we can bring another state championship that would be ideal.”
Whether that was on the minds of any of the athletes playing on Tuesday is not clear but what was clear was the desire to get better as both an individual and a team. Take, for example, the boys team from Sharyland High. The team advanced to the third round of the UIL state playoffs this past April but is already getting ready for next season.
Alex Jarvis and Alex Espinoza were on the field Tuesday night doing just that. “It lets the team not only improve skill wise but also we can get together, like, as a team,” said Jarvis. “If we start (in) August without any experience playing over the last few months we’re going to be rushed but if we play here as a team we can get to know each other and improve our chemistry.” Espinoza agreed with his teammate, citing the benefits these games bring in terms of conditioning and getting to know each other better. He also mentioned how the hoped the experience would lead to more victories next season when the Rattlers return to UIL play.
The RASA run league is not the only opportunity this summer for teams to improve. According to George Castaneda, the Sharyland boys league coach, there is another league starting play tomorrow at Sharyland High School.
Will all these leagues help bring another state title to the Valley as Trevino envisions? Only time will tell but just thinking about it, and the path that teams need to take to get there, has this soccer fan already looking forward to next season.