The building is 7-stories high and has a total of 31 courtrooms. It is also the largest vertically constructed public building in the history of the Rio Grande Valley.

Laura Warren, the principal owner of The Warren Group Architects Inc., was the head of the tour. 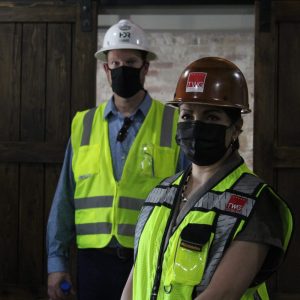 A noticeable change to the design and layout of the courthouse is that the judiciary, staff, public, and inmates now have their designated areas of an entrance, whereas, in the old courthouse, they would enter the same way.

Inmates will enter the building through a side entrance, where they will wait in holding areas until trial, where their attorneys can accompany them adjacent to a window.

The public can enter through the front doors, greeted with a spacious lobby. They will go up to the courtrooms on the upper levels with elevators and escalators to get courtroom officials, staff, and jurors to the above floors as needed, where they will sign in at kiosks before entering any courtrooms.

“Security needs to be optimal,” said Warren while explaining the importance of the designated entryways for each group.

The Hidalgo County Courthouse will have three courts: a county court, a district court, and a court of appeals.

In the courtrooms, the carpeting accents showcase a pattern similar to the bark of the mesquite tree.

Places such as the witness stand and judge’s bench have kevlar material, should there be an instance where someone comes into the courtroom with a firearm. Although this material is typically used in courtrooms nationwide, this is the first of its usage in a court present in Hidalgo County. 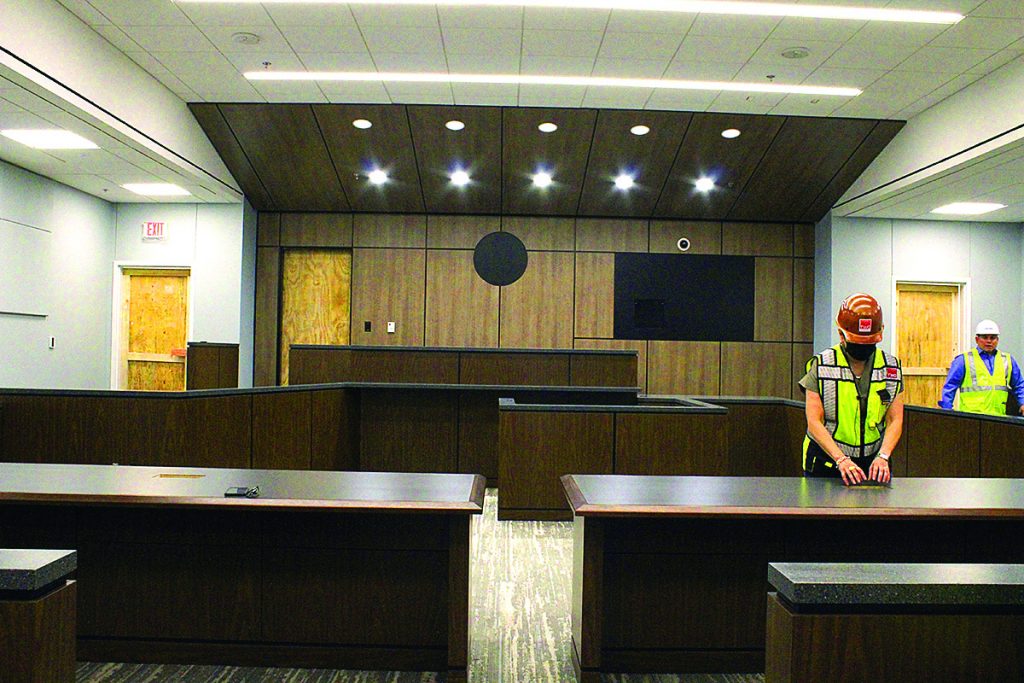 Warren tours the inside of a nearly completed courtroom on the third floor. Progress Times photo by Maria Ruiz

Improved technology is executed through monitors on wall panels to showcase evidence and acoustic panels to keep sound inside the courtrooms so that neighboring rooms don’t face disruption.

The courtroom is also wheelchair friendly, with spaces at the bar by public seating.

An individual room with windows to the south side of the courtrooms was built for media personnel to report, record, and gain information while the court is in session.

“The result of this courtroom came from the collaboration of many people,” said Warren, with 50% of all design work done by local firms.

Mosaic Talavera tiles of blue and ivory adorn the walls by the office space, paying homage to the Hispanic background of the Rio Grande Valley.

“When we were working with the interior designers, we were looking for elements that honor our Latin roots,” said Warren, saying Hidalgo County is rich in Hispanic culture and that it acts as a reflection of the people who are native to the Valley. 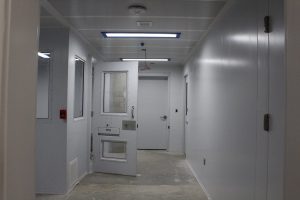 The inside of an inmate holding area. Inmates reside here until the start of the trial. Progress Times photo by Maria Ruiz

Although the schematic design for the new courthouse was approved by the Hidalgo County Commissioners Court back in March 2018, John Niesen, architectural manager and courts planner at HDR Architecture Inc., said that he has been on the project since 2013.

As the pandemic began over a year ago, construction continued, pushing the administrations to overcome the struggles of a tightened supply chain of construction material and testing the installation of water, electrical, and air conditioning systems. This struggle allowed designers to develop methods of telecommunication that would make court sessions easily accessible from remote locations with connectivity.

In addition to the COVID-19 pandemic, construction crews had to contend with natural disasters, such as Hurricane Hanna, flooding from the severe seasonal thunderstorms, and the February hard freeze.

“We are excited to be able to present this courthouse to the citizens of Hidalgo County,” said Niesen.  “The new face of justice, if you will, in Hidalgo County is that justice is available to everyone.”

The new Hidalgo County Courthouse is 74% completed as of May 13 and will be finished by 2022. The competition of the overall project remains on schedule for March of 2023.