He’s coached soccer at Sharyland High School for over 20 years. He’s led the Rattlers to 21 playoff appearances over that span. He’s one of only a handful of Valley coaches in any sport to ever lead a team to a state championship. He’s Coach Reveriano “Rev” Hernandez, and with the 2020/2021 school year having concluded last week, his coaching career has now officially come to an end at the same place it all began.

It’s no secret that anyone who chooses to go into coaching as a career does so knowing full well that there are no guarantees when it comes to job stability. That’s because coaching is a, “What have you done for me lately?” profession. In other words, today’s success in no way guarantees continued employment tomorrow. A coach can have his or her team at the top of the heap one day and be gone the next. 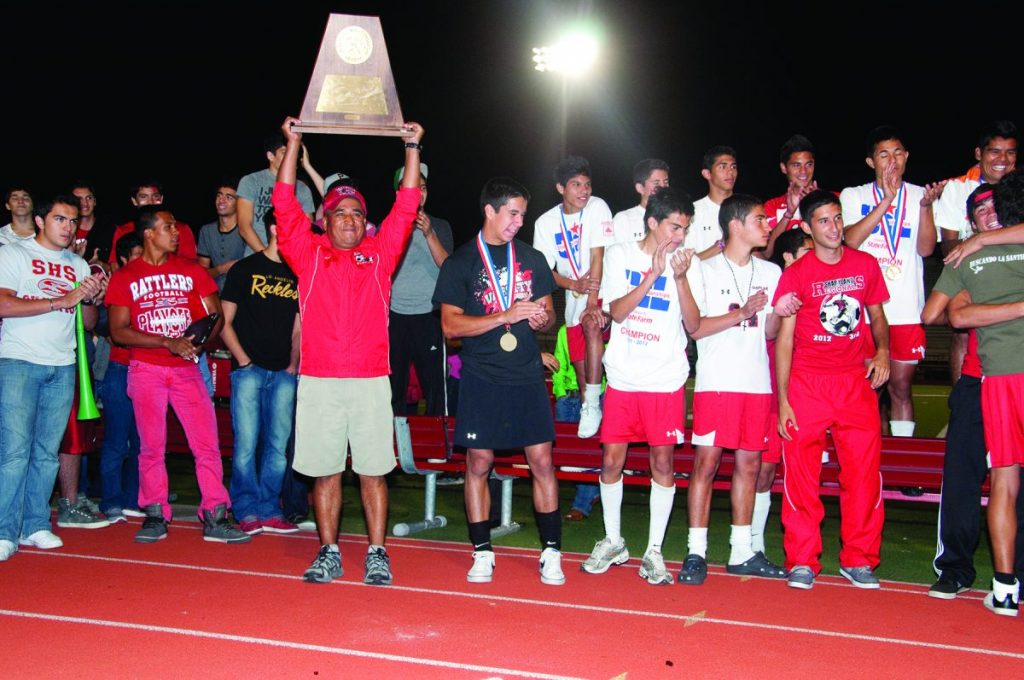 Sharyland High head soccer coach Reveriano Hernandez celebrates the Rattlers’ state championship in front of thousand of fans that showed up for the welcome home rally thrown in their honor. Progress Times photo by Luciano Guerra

There are of course exceptions to this rule, but they are few and far between. Having coached his entire career at Sharyland High, Hernandez is one of the exceptions. And were it not for his decision to retire at the relatively young age of 54, there’s no doubt that he would’ve extended what is now his 22 year tenure of coaching soccer at Sharyland High, even longer.

Hernandez’s love for the sport of soccer began long before his coaching career began. He grew up playing soccer in his hometown of Brownsville, Texas and he was good enough to be given the opportunity to play at both the high school level and the Division 1 collegiate level.

“I graduated from Brownsville Hanna in 1986,” Hernandez said. “I played soccer there three years. After high school I went to play for what was then Pan American University. I received a scholarship to play there. I played there four years. I graduated in 1990 with a degree in Special Ed and I went to work in 1990/1991.” 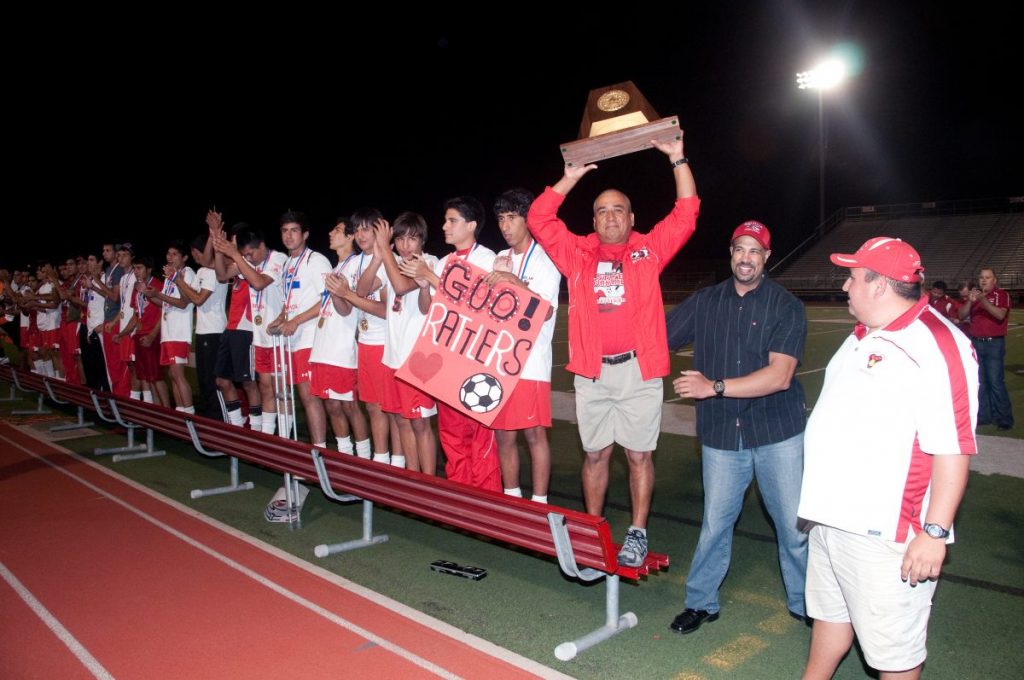 Having graduated from Pan American during the month of December and not wanting to wait until the beginning of the following school year to begin his teaching career, Hernandez accepted a position in Rio Grande City. A position he only kept for two years due to receiving an offer he could not refuse to teach in Sharyland, where he was already living.

“I think when I started working at Sharyland, that’s when they started the soccer program,” Hernandez said. “Demian Marroquin and Shane Hurley, both of whom were my teammates at Pan Am, were the coaches at Sharyland so I started as a volunteer. When Hurley moved on to San Antonio I started coaching the JV team. Within two years Marroquin moved on as well, and I became the head coach.”

As stated previously, that was 22 years ago. And while it’s true that he’s led the Rattlers to the playoffs in 21 of those seasons, it took a pandemic to prevent him from making it 22 playoff appearances in 22 years. That’s because despite having a 14-0 district record (26-3-2 overall) and claiming the district championship last year, COVID-19 forced the UIL cut all Texas high school soccer seasons short just as the playoffs were about to kick off.

“We went up against Morton Ranch from Katy, Texas for the state championship,” Hernandez said. “I know that we went ahead 1-0 but they turned the game around and we were losing 2-1. Then we scored in the last minute of the game, I think, to tie it at 2-2. Then we went into overtime but nobody scored in overtime. Then we went to shootouts and we were losing 3-1. Our first three guys missed and then on the last two we scored. They missed on their last two, so it was 3-3. Then we went to sudden death and Amahry Lozano scored the winning goal for us.”

While Valley soccer teams have won more state championships over the years than Valley teams from any other sport, being a state champion in the Rio Grande Valley is still a very exclusive club.

That night the Sharyland Rattlers arrived back at Sharyland High School at around midnight. The team was greeted by thousands of fans at a rally in their honor which was held at the football stadium. When asked what it was like to be greeted by so many fans, Hernandez said, “It was really something. I think the whole Upper Valley was there in the stadium waiting for us. Even at the stadium where we played over there, there were so many people from the Valley, and not only from Sharyland, cheering for us. It was something special.”

The Rattlers’ two goals in regulation of that state championship game were scored by Daniel Garcia and Jesus Olivares. The goalkeeper was Jorge Medina. He had six saves in that game. 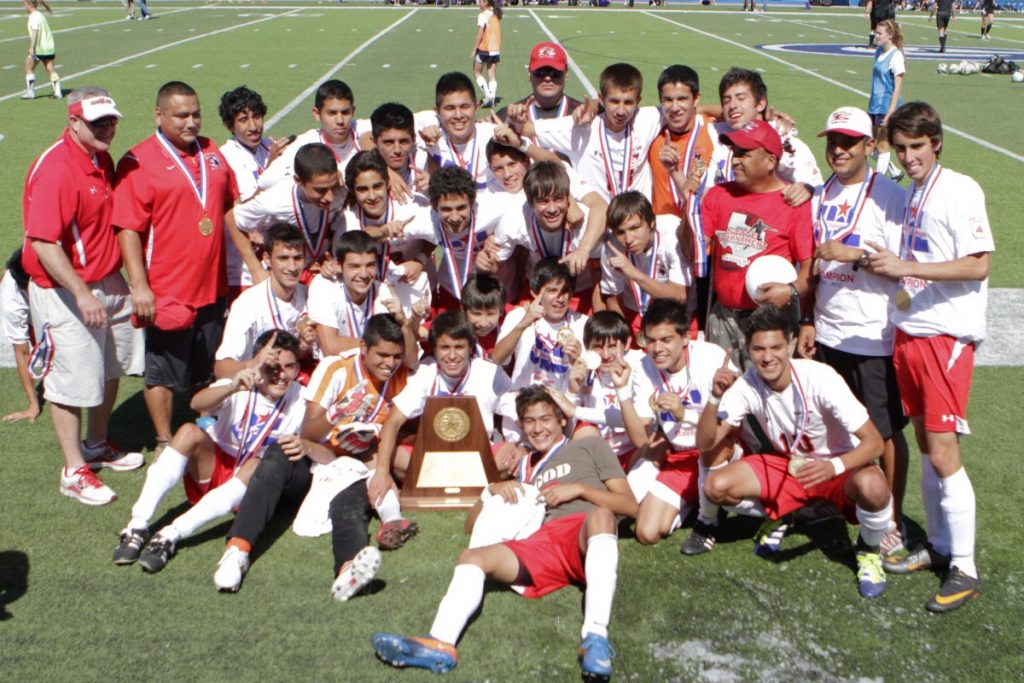 Over his 22 year tenure as the Rattlers head coach, Hernandez has accumulated a record of 466 wins, 108 losses and 41 ties. No matter how you look at his won-loss record and no matter how you look at all the playoff appearances, all the district championships and all the playoff championships the Rattlers have won under him, Hernandez’s accomplishments are extremely impressive.

What has made him so successful? Hernandez had no problem answering that question.

“I’ve never looked at my 22 years as the Rattlers head soccer coach as a job,” Hernandez said. “It’s been a calling. It’s been my passion. I think that’s the reason I’ve been so successful.”

“I want to thank everybody,” Hernandez added. “All my former players, all my coaches, all the people that were on top of me like the ACs (athletic coordinators), the AD (athletic directors) and the principals. I thank them for giving me the opportunity to work with them and for making it possible for me to enjoy every day of my time here at Sharyland.”