When Bensavio “Ben” Yzaguirre began coaching at Mission Veterans High School, not a single one of the wrestlers on this year’s Patriots and Lady Patriots wrestling teams had been born yet. That’s because he just completed his 19th and final year of coaching at Mission Vets. And while hanging up his whistle and clipboard for good by retiring now is something that he’s been planning on doing for years, the decision to do so is a bittersweet one. 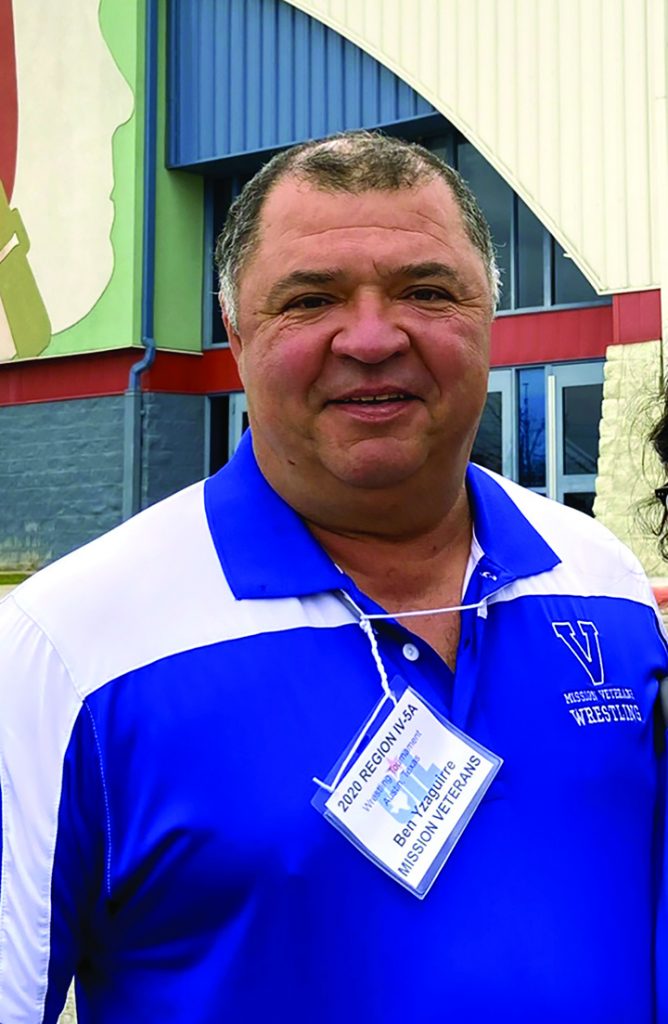 Born and raised in Concepcion, Texas, 10 miles west of Premont, Yzaguirre was bused 17 miles twice a day to the town of Benavides where he attended school. He graduated from Benavides High School in 1979. Even back then, sports were a big part of his life.

“I played high school football, basketball and track and field,” Yzaguirre said. “I then ended up going to Kingsville (Texas A&I University) where I was on the football team my freshman year. I played in two games. It was very exciting. We did have a few guys that went on to the NFL from that team and we ended up winning the national championship. While I didn’t make the road team or anything like that, I was on the team the whole year.”

After his freshman year at A&I, Yzaguirre walked away from football so that he could start working while going to school. Not long after that he made the move to the Valley.

“My wife finished school in Kingsville before I did and we moved to the Valley where I ended up graduating from UTPA, the very first year it became the University of Texas Pan American,” Yzaguirre said. “My degree is in kinesiology and my minor is in biology.”

As it turns out, Yzaguirre’s minor of biology was Plan B. That’s because he soon realized that Plan A was not for him.

“I was going the math route but when I got to Calculus II I said, ‘Hold on. This is a little crazy for me,’” Yzaguirre said. “So my advisor, seeing that I had good grades in science, said I should take biology. So I went that route, and sure enough it was a piece of cake.”

Upon graduating from UTPA, Yzaguirre took a teaching and coaching position at De Leon Junior High in McAllen. He taught science and coached 8th grade football, basketball and track and field. One year later he moved on to McAllen High School.
“That’s when Nikki Rowe ended up becoming a high school,” Yzaguirre said. “The first year I taught it was still a ninth grade center. The following year it became a high school so they needed biology teachers at all the high schools. That’s when I met with Alex Leal at McAllen High and he offered me a job as a freshman coach, so I made the move.”

Five years and several head coaches later, Yzaguirre made the move to Sharyland High where he coached linebackers under head coach Marci De La Fuente for two years. This was in the late 1990’s.

Not being one to let the grass grow under his feet for too long, Yzaguirre then moved on to Hidalgo High School where he remained for three years. His first year with the Pirates, Yzaguirre coached the offensive line. He then coached linebackers and became the head baseball coach at Hidalgo High School.

“After that, that’s when Mission Veterans became a high school,” Yzaguirre said. “It was no longer a 9th grade center. Bucky (Rodriguez) got the job (head football coach) and offered me a position. And sure enough I ended up at Mission Veterans where I coached for 19 years.” 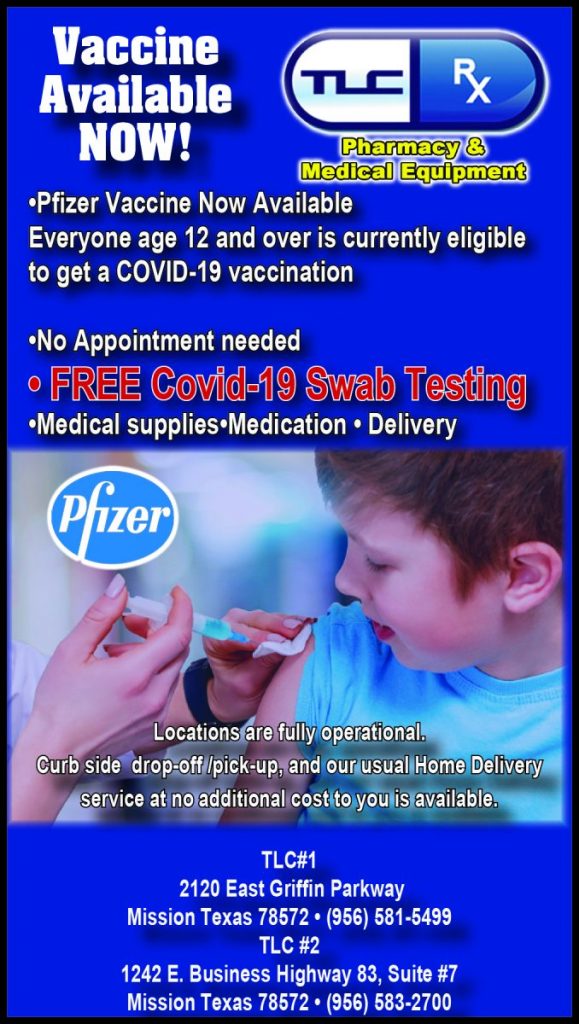 Despite having coached at four different schools in three different school districts, Yzaguirre had yet to coach wrestling anywhere. This included his first year at Mission Vets. However, that was soon to change.

“We were starting the school year and the guy that started the program was going back to El Paso, so Carlos basically asked me to help him out for one year if I wanted to,” Yzaguirre added. “So I ended up doing it. Thank goodness I had some good wrestlers because they basically taught me what the whole practice was all about; not only that, we ended winning the district championship with those kids.”

From day one of coaching wrestling at Mission Veterans, Yzaguirre has coached both the boys and the girls teams. While his teams have won numerous district championships, Yzaguirre was not one to keep track of such things.

“I want to say that we won four district championships with the girls and three with the boys,” Yzaguirre said. “There’s always a changing of the guard. It’s like you get good groups (of wrestlers) and then you have to rebuild. You get good groups, and then you have to rebuild again. But with the girls, we did get second place at regionals two years in a row. One year we lost by one point.”

Yzaguirre does not know how many state qualifying wrestlers he’s had over the years either, but he has had numerous. He also has his own theory on why of all high school sports, wrestling is the one sport in which Valley athletes have the best chance of competing at the regional and state levels.

“Our kids don’t expect anything to be given to them,” Yzaguirre added. “They work for it. They’re scrappy kids.”

But the comradery with his kids is not all Yzaguirre is going to miss now that he’s hanging up his coaching gear for good. 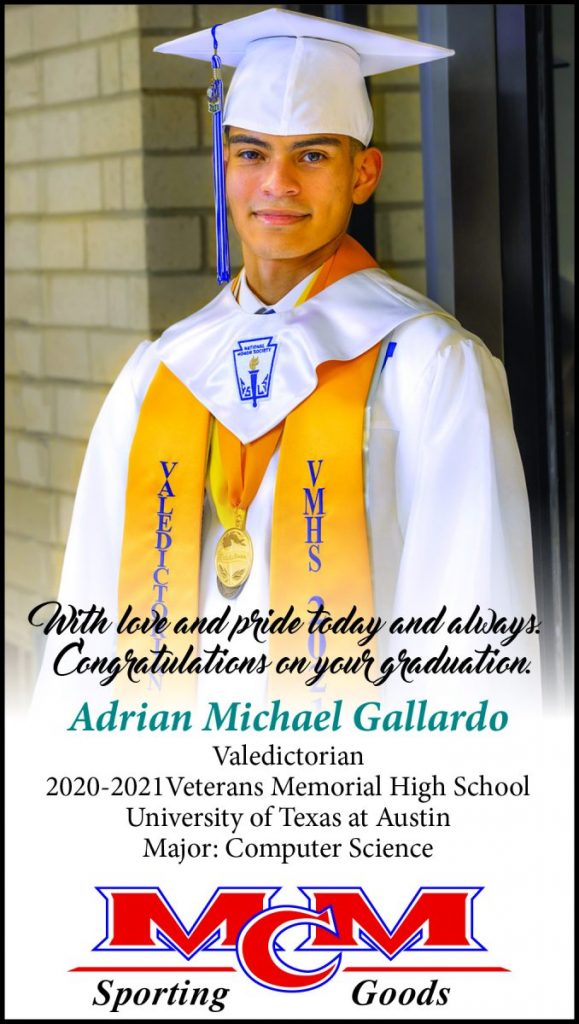 While Yzaguirre has devoted his entire career to teaching and coaching young people, he has learned a thing or two from his athletes as well.

“The biggest thing I’ve learned is that so many kids are different,” Yzaguirre said. “Everybody works on a different schedule. In other words, the way you treat one athlete, you can’t treat another one. Everybody has different buttons and if you press the wrong button, they can shut down on you and once they shut down, that’s it. You’re not going to get through to them.”

“You become a psychologist and a counselor and a coach,” added Yzaguirre. “You’re everything all rolled up into one.”

That is why coaching matters (pun intended). And that is why Coach Yzaguirre has been such a positive influence in the lives of so many student athletes on and off the field, court or mat. From the day he accepted his first position at De Leon Junior High to the final day of the 2020/2021 school year at Mission Veterans, the coach, the teacher, the man from Concepcion, Texas has made his mark. And that mark will continue to change lives for years to come. Well done, coach.