After they attended a briefing on border security, Abbott and Trump addressed a small crowd of supporters near the Pharr-Reynosa International Bridge on Wednesday afternoon. 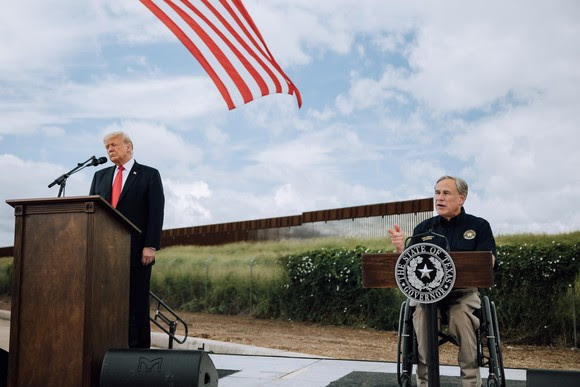 Abbott blasted President Joe Biden, touted his plan to build a “Texas border wall” and lauded the Department of Public Safety for making Operation Lone Star — the latest in a string of state border security operations — a success.

“It is time to make sure we seal this border and close it down,” Abbott said.

Trump, though, had trouble staying on topic.

During a rambling speech, the former president talked about everything from the “fake election” to “Russia, Russia, Russia.”

Trump described his border security and immigration policies, which included separating migrant children from their parents and building a border wall that cost up to $46 million per mile, as near-perfect.

“All Biden had to do is go to the beach,” Trump said. “If he would have just done nothing, we would have now the strongest border we’ve ever had.”

Trump described the border wall as “rotting and rusting,” apparently a reference to the rust-red color of the bollards. 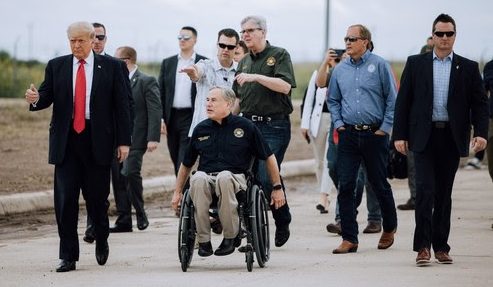 “They have to paint it. Because if they don’t paint it, bad things are happening,” Trump said. “I’m looking, and it has to be painted. And the best color to paint it is black. Because if you paint it black, it’s so hot nobody can even try to climb it.”

Trump also spent a significant amount of time working his way through a laundry list of Republicans who showed up to support him.

“I wasn’t going to read your names because there’s too many of you,” Trump said. “Unless you want me to. Should I read them?”

Trump riffed about U.S. Rep. Chip Roy, R-Texas, (“Where is Chip? Hey, Chip. How are you, Chip? Talk to you later, Chip.”), U.S. Rep. Lauren Bobert, R-Colorado (“Nobody can walk into your house, that I promise you. You know, the guns will be blazing, right?”), and U.S. Rep. Ronny Jackson, R-Texas, a former White House physician (“He actually said I was the healthiest president in history, by far.”)

Lt. Gov. Dan Patrick (“Are you going to be my campaign manager if I do this again?”) and Attorney General Ken Paxton (“I call you an activist. You are active.”) also made the trip.

Not a single lawmaker from the Valley showed up. 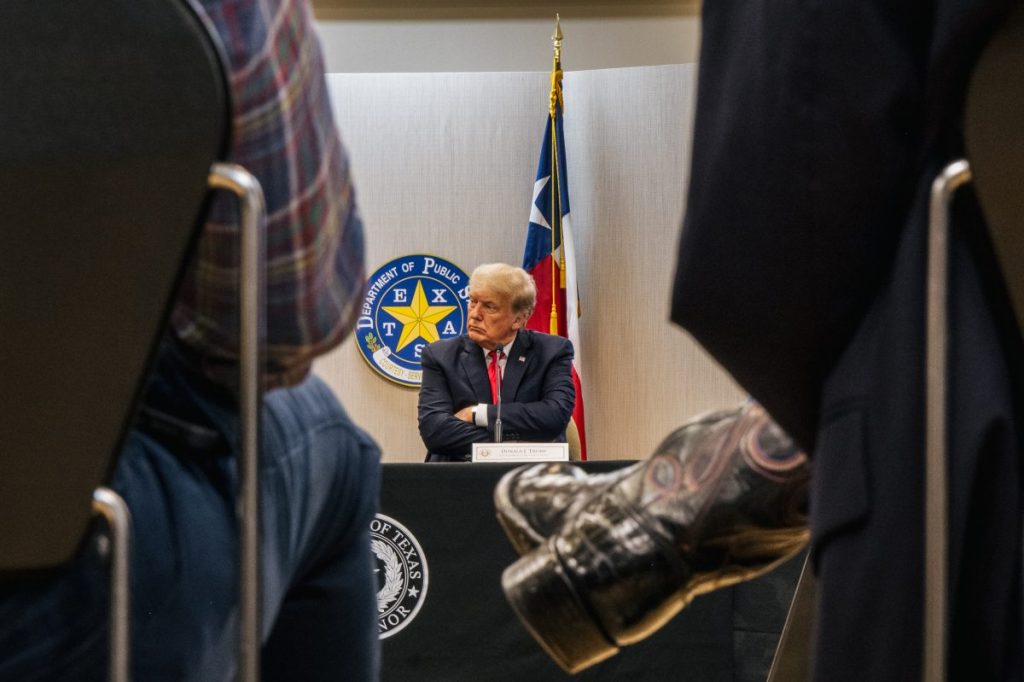 Former President Donald Trump attended a briefing on border security Wednesday at the Texas Department of Public Safety building in Weslaco. (Photo by Hilary Markiewicz of Getty Images via pool.)

“I think it was just a real slap in the face for South Texans,” said U.S. Rep. Vicente Gonzalez, D-McAllen, who called the border wall tour a political stunt.

Abbott invited Trump to the Valley as part of a strategy to avoid a far-right challenger in the Republican primary, Gonzalez said.

“I think most people recognize what the governor hasn’t,” Gonzalez said. “The election is over. Donald Trump lost. Let’s move on as Americans.”