During a hearing last week, U.S. District Judge Randy Crane said the fourth defendant — Sylvia Garces Valdez, who handled public relations for the city — also planned to work something out with prosecutors.

“My client has accepted responsibility for her actions from the beginning,” said attorney Carlos A. Garcia of Mission, who represents Garces Valdez. “Since before her arrest.” 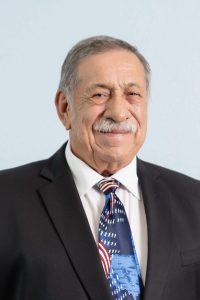 Garces Valdez, a teacher who served on the housing authority board, is accused of paying approximately $10,000 to Frances Salinas after the City Council approved her public relations contract.

“She’s trying her best to correct any wrongs that she may have committed,” Garcia said, adding that Garces Valdez would do whatever she could to assist the government.

How the case will be resolved isn’t clear. With the bribery charge pending, Garcia said he couldn’t discuss the details.

“She comes from a very strong, very religious family, and she has five beautiful boys that she’s a mother to,” Garcia said. “She’s lived a long life of service, not only in the classroom, but in the community and in the church.”

The case against Fito Salinas, meanwhile, is scheduled for jury selection on July 19.

His attorney, Richard Zayas of Brownsville, didn’t respond to a request for comment.

Prosecutors originally anticipated the case, which involved schemes to defraud the city, the housing authority and a project funded by the La Joya Economic Development Corp., would take about two weeks.

The housing authority scheme, however, only involved Frances Salinas. Her plea will allow prosecutors to narrow the case.

During the hearing, Assistant U.S. Attorney Sarina S. DiPiazza said she anticipated the trial would take about a week.

Whether or not Frances Salinas will testify against her father remains unclear.

When she pleaded guilty, Frances Salinas confessed to stealing money and soliciting kickbacks during construction of a project funded by the La Joya EDC.

Frances Salinas, though, hedged on her father’s involvement.

She admitted to all factual allegations contained in the section of the indictment that addressed the La Joya EDC scheme “with the exception of those factual allegations relating to the involvement of Jose Adolfo Salinas as a co-conspirator, which she does not admit or deny,” DiPiazza said on June 17, when Frances Salinas pleaded guilty.