A former medical assistant who smuggled marijuana into the East Hidalgo Detention Center pleaded guilty to bribery on Tuesday.

Veronica Ortega, 45, of McAllen pleaded guilty Tuesday afternoon, when she confessed to providing an inmate with marijuana in exchange for cash.

Ortega, a certified medical assistant, slipped marijuana to an inmate the same way she would provide medical treatment, said Assistant U.S. Attorney Amy Lynn Greenbaum, who prosecuted the case. In exchange, the inmate’s family provided her with cash.

“Guilty,” Ortega said Tuesday afternoon, when asked how she pleaded.

Ortega worked at the East Hidalgo Detention Center, a 1,300-bed jail owned by the GEO Group, a private prison company based in Boca Raton, Florida.

The jail holds inmates for the U.S. Marshals Service, U.S. Immigration and Customs Enforcement, and other federal agencies.

After an investigation by the Marshals Service, the FBI and the U.S. Department of Justice Office of Inspector General, prosecutors secured indictments against Ortega and six other employees:

One by one, they pleaded guilty.

Estrada was sentenced to two years and three months in prison. Gonzalez Hernandez got six months. Fuentes received one year and one day in prison.

Ortega — the last employee to plead guilty — appeared before U.S. District Judge Micaela Alvarez on Tuesday afternoon. As she admitted to bribery, a woman in the audience rushed from the room in tears.

The indictments don’t reveal how the FBI and the Office of Inspector General identified corrupt employees.

Loya, however, confessed to providing an inmate named Erick Alan “Cachorro” Torres Davila with cocaine from November 2016 to June 2019. 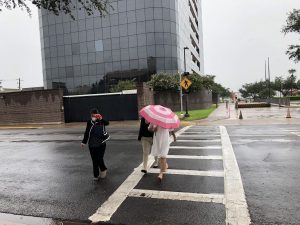 Veronica Ortega, 45, of McAllen covered her face with an umbrella as she left the federal courthouse on Tuesday afternoon. (Photo by Dave Hendricks / The Progress Times.)

They pleaded guilty to drug trafficking charges in 2018. After three years of delays, they’re tentatively scheduled for sentencing on July 26.

Assistant U.S. Attorney Patricia Cook Profit, who handled the Operation Yeyo Express case, also worked on the East Hidalgo Detention Center cases, according to a news release from the U.S. Attorney’s Office for the Southern District of Texas.

Attorney Carlos A. Garcia, who represents Torres Davila, declined to comment on any connection between his client and the East Hidalgo Detention Center cases.

Ortega is scheduled for sentencing on Sept. 16. She faces a maximum sentence of 15 years in federal prison.