A judge sentenced a former prosecutor to probation Wednesday for lying to federal agents.

“I am truly sorry and sincerely apologize,” Alanis said Wednesday afternoon, fighting back tears during a hearing at the federal courthouse in Brownsville. “I apologize to the court, to the government and to my family.” 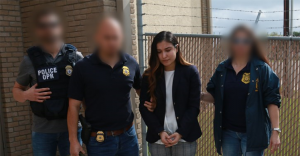 Cynthia Alanis, 28, of Weslaco after her arrest in 2020. (Photo courtesy of U.S. Immigration and Customs Enforcement.)

After graduation, Alanis returned to the Rio Grande Valley and worked for her brother, Roel, a local immigration attorney.

Roel, however, had a secret.

To recruit clients, Roel needed information about people jailed at immigration detention centers, including their names and what the U.S. Department of Homeland Security calls “alien registration numbers.”

Agents with U.S. Immigration and Customs Enforcement arrested Roel in 2019.

Alanis told agents “she had not ever seen, received nor did she have any knowledge of, any alien detainee roster lists given to the Alanis Law Firm,” according to an application for a search warrant filed in April 2020.

Text messages between Alanis and her brother, though, told a different story.

The messages showed that Roel had talked with Alanis — saved as “Sis” in his contacts — about visiting people at local detention centers.

Agents also interviewed a former Willacy County Regional Detention Center employee, who said he provided Alanis and a paralegal with a detainee roster list. The paralegal corroborated the story.

A federal grand jury indicted Alanis in February 2020. At the time, she worked for the Hidalgo County District Attorney’s Office.

“It is my understanding that the charges filed are unrelated to any of the work performed by the former employee in this office,” Hidalgo County District Attorney Ricardo Rodriguez said in a statement released after her arrest. “The District Attorney’s Office will cooperate with any federal investigation.”

Alanis pleaded guilty in February 2021 and surrendered her law license. She returned to the federal courthouse in Brownsville on Wednesday afternoon for sentencing.

The U.S. Probation Office recommended that Alanis be placed on probation for one year.

Medrano said that Alanis had already suffered tremendously and sought help from a psychiatrist for depression.

Alanis apologized and asked the judge for probation.

“I am so eager to get back on track,” Alanis said, and move past “this huge mistake in my life.”