The Sullivan City Council may attempt to settle an argument over the Cuevitas cemetery.

A dispute over whether or not to lock the cemetery gate divided the close-knit community during the past few months.

Some people want to lock the main gate, which is wide enough for a vehicle to pass through, to deter illegal activity. Others vehemently oppose the decision.

Without knowing who actually owns the cemetery, though, the argument can’t be settled.

The City Council attempted to answer that question Monday, when members approved a survey of the property. 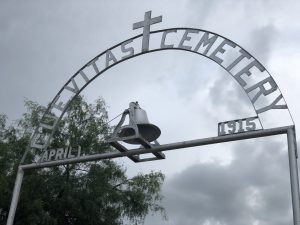 The Cuevitas cemetery is hallowed ground for many families in western Hidalgo County. (Photo by Dave Hendricks / The Progress Times)

“Once we know who the owner is, we’re going to have one of two paths to take,” said City Attorney Jose L. Caso. “We’re either going to be able to assist the residents of Cuevitas to create an association and then you will — or the association will — control it. Or it may be beyond that possibility and the city may need to take it over through eminent domain.”

Founded more than a century ago, the Cuevitas cemetery is hallowed ground for many families in western Hidalgo County.

Flags and flowers dot the tombstones. Many belong to the Flores, Salinas and Villalon families, which lived in Cuevitas during the 1800s.

They include Anglos and Hispanics, a 10-day-old baby and a 96-year-old woman, people lost to history and U.S. Army Cpl. Guadalupe Flores, who died a hero in Vietnam.

Anyone with roots in Cuevitas may be interred at the cemetery. Without an association to make rules or an owner to charge fees, people simply pick a plot and bury their dead.

The informal system, which had worked for decades, apparently fell apart when a lock appeared on the main gate.

Some members of the community decided to lock the gate because they were concerned about illegal activity, including drinking and vandalism. Another, smaller gate remained open, but the lock prevented vehicles from entering the cemetery.

Other members of the community opposed the decision. They said the lock wouldn’t prevent crime and hindered access to community property.

“People are making decisions that affect the whole community,” said Nellie Flores, 57, of Cuevitas. “And we feel that that’s not right. It’s not right for them to make decisions. And it all started with them locking the cemetery.”

The dispute reached the City Council on Monday night, when members authorized the survey.

“We want to get to the bottom of it,” said Mayor Alma Salinas. 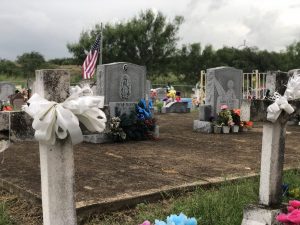 Flags mark the graves of veterans at the Cuevitas cemetery. (Photo by Dave Hendricks / The Progress Times)

“There’s no easy answer. And not everybody’s going to be happy with the outcome. But right now, we’re just on a fact-finding mission. We’re not making any determination other than finding out: Who is the owner?” Caso said. “And that will be shared with the whole community. And, after that, we can all get together and maybe reach a consensus. But, ultimately, the City Council’s going to determine what they think is the best interest of the city.”

After the meeting adjourned, Salinas, Caso and City Manager Ana Mercado stayed behind to discuss the cemetery with Cuevitas residents. The discussion quickly devolved into a shouting match between people who supported the lock and people who opposed it.

The back-and-forth, which lasted 30 minutes, didn’t resolve the dispute.

Jessica Castillo, 40, of Peñitas, who said her grandparents live in Cuevitas, and Graciela Reyes, 62, of Sullivan City, who said she was raised in Cuevitas, started arguing.

Officers from the Sullivan City Police Department had to break up the altercation.

Castillo, who said her grandfather lives across the street from the cemetery, had collected signatures on a petition against the lock.

“It’s just them trying to get control over something that doesn’t belong to them,” Castillo said.

Reyes said they had good reason to lock the cemetery.

“There were people coming in, drinking,” Reyes said. “Illegal trafficking — drugs and people.”