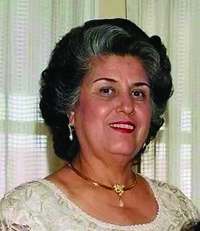 MISSION – Rita Cavazos passed peacefully in her sleep on July 10, 2021, at the family home in Mission; she was 79 years old.

Rita was born in Los Herreras, Nuevo Leon, Mexico, to Teofila Cantu. Her father, Genovevo, passed away about six weeks before she was born. Rita was born on May 22, 1942, and was named after Saint Rita the Patroness of Impossible Causes. She was the third of four children and grew up in Los Herreras and Los Ramones, later moving to Rio Bravo and eventually Reynosa, Tamaulipas, Mexico.             With only an elementary education, she worked a variety of jobs in her teens and twenties. Rita and her sister, Tere, were avid baseball fans and enjoyed bowling frequently, participating in tournaments with teams across the border in Mission. It was through bowling on a woman’s league, where she caught the eye of Ben.

Ben and Rita’s love story began in the spring of 1968, when they met at the Grapefruit Bowl in Mission. They courted for eight months and got married on December 28. Ben and Rita were lifelong residents of Mission; their marriage was an inspiration to many. They always celebrated their monthly anniversaries and frequently invited other couples to join them for dinner and trips. They hosted lovely anniversary parties every five years and had big bashes for their Silver, Ruby, and Golden Anniversaries.

Rita was a devoted wife and supported Ben in all aspects of their life together. Rita loved everything about making a house a home. Even in her last days, she was busy getting settled back into their home on Orange Avenue after a renovation to make it wheelchair accessible for Ben’s broken hips recovery.

Rita was a devoted mother to Martha and Oscar. She delivered hot lunches everyday throughout their elementary school years and frequently volunteered taxiing kids around in the family’s brown van.

Rita was proud of her traditional old fashioned Mexican upbringing but was equally proud to become an American citizen in 2015. She was a constant fixture in Ben’s business Mission Auto Electric, aka, MAE Power Equipment. Rita frequently made lunch for all the employees and took pride in hosting them and their spouses at the annual Christmas celebration held at their home. Rita accompanied Ben on all his business and civic engagements from Kiwanis to Mission Hospital to the Amistad Club.

Ben and Rita loved to travel. They traveled all over the US, Mexico, Hawaii, Germany, Switzerland, and Belize. Their last big trip was to the Holy Land in 2017.

Rita was a great cook and took tremendous pride in making large amounts of nopales and capirotada during Lent, hundreds of dozens of tamales and gigantic pots of menudo for winter celebrations and weddings, countless empanadas, flans, frijoles a la charra and “pico de gallo” for every occasion in between. A favorite pastime was sharing food with others and frequently delivering meals or baked goods to neighbors and friends. Rita enjoyed kitchen gadgets, dishes and cookware. She left us volumes of handwritten recipes she jotted down while watching cooking shows, which was another one of her favorite pastimes.

Rita enjoyed gardening very much. She had not one, but two green thumbs. She could grow anything from enormous ferns to tomatoes, orchids to papayas, medicinal herbs to succulents and ivy by the dozens. Rita took pride in the variety of fruit trees and the giant Live Oak tree in the yard of their home of 44 years on Orange Avenue. She loved sharing plants and the pecans, peaches, figs, oranges, and limes from the family trees. Over the last 20 years she carefully transplanted saplings from the Live Oak and shared them with anyone she thought needed a tree.

Rita was very thoughtful. She delighted in shopping and bargain hunting; she got very excited about sales. Rita was always buying items with others in mind. She would always leave the pantries and freezers stocked with food and the closets stocked with all the consumables we ever needed. If she thought you were cold, she bought you a jacket and blanket; if you were a new bride, she bought you all her favorite kitchen gadgets; and if you had a baby, she bought you plenty of clothing, blankets, and accessories.

Rita enjoyed sewing and made all the clothes for her daughter, Martha, until she was 10. She made “colchas” (quilts) the old-fashioned way, hand carding the wool and stitching the quilting by hand.

Rita was a dedicated member of Our Lady of Guadalupe Catholic Church. She was involved in the Guadalupanas ladies organization and always available to volunteer and lend a helping hand especially if it involved cooking. She loved making ‘gorditas’ for the annual Fiestas Guadalupanas.

Rita loved to laugh, and she always had a good “chiste” (joke) or funny story to share. Rita also adored her granddaughter, Micaela, and mariachi and marimba music.

Rita was preceded in death by her mother, Teofila Cantu, in 1986; brother, Ricardo Gome; and sister, Tere Gomez Yanez of Reynosa, who passed away in the early 90s. She missed them terribly, and we know she is happy to be reunited with them along with Joe Lazo, Angelica Lazo and Gene Welsh; nephews, Ricky Lazo, Ronnie Welsh and Vincent Mendez; and dear friends Yolanda Garcia, Socorro Guerra, Lydia Espercueta, Lupita DeLeon, Charlie Christesson, Chris Peris, Arnaldo and Tina Ramirez, and A.C. and Dora Jaime; and the family dogs, Puppy, Chilindrina, Mondi, Beau and Dodo.

Memorial donations can be made to Our Lady of Guadalupe Church. The family hopes to establish a memorial garden and St. Rita statue in her honor on the church grounds.

Visitation and a rosary service were held on Monday, July 19. The funeral Mass was held on Tuesday, June 20, at Our Lady of Guadalupe Catholic Church in Mission. Burial followed at Rio Grande Valley State Veterans Cemetery in Mission. Funeral arrangements are being handled by Ric Brown Family Funeral Home Mission.