With the Washington Nationals up by four, Barrera led off the bottom of the second inning by launching the ball into the left-center field stands on a first-pitch hit, earning a solo home run and making the score 5-0. 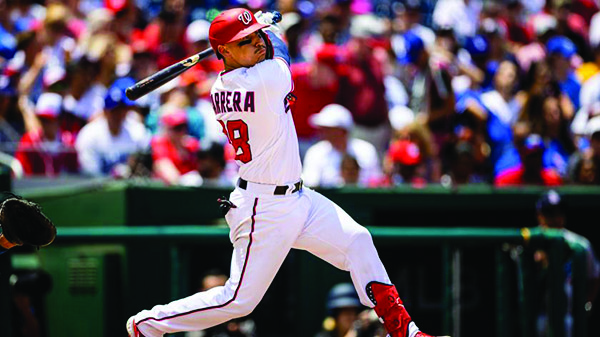 As is MLB tradition, Barrera received the silent treatment from his teammates when he reentered the dugout. He celebrated by himself for a short time before the rest of the team jumped to congratulate him. The Nationals went on to win the game 18-1.

Barrera’s first home run came on the heels of a batting slump earlier this year. After spending a few days on the Nationals’ roster in April and going 0 for 2, Barrera was sent back down to the Rochester Red Wings — the Nationals’ minor league team. But due to injuries to the Nationals’ top two catchers, Manager Dave Martinez called on Barrera to step in behind the plate alongside catcher Rene Rivera. Barrera has been back on the active roster since July 3.

As of July 21, the former Sharyland Rattler has started as a catcher in four of the seven games since coming back from the All-Star break. And during Sunday’s game against the San Diego Padres, Barrera scored the final run, securing a win against the NL West’s third-ranked team.

The Washington baseball team drafted the now 26-year-old Barrera in 2016 from the University of Texas. During his time at Sharyland High, Barrera played under Coach Barton Bickerton. In his senior year, he was dubbed the Louisville Slugger first-team All-American catcher.

Barrera is active on Instagram and Twitter, where he posts about his time on the diamond and his wife Lindsey Barrera.