Beto Salinas — who plans to run against Mission Mayor Armando “Doc” O’caña in 2022 — filed the lawsuit on Tuesday afternoon.

“I think, at the end of the day, it’s just a cocktail for disaster,” said attorney Rick Salinas of Mission, who represents his father. “Somewhere down the road, the city is going to be burdened with an enormous debt.” 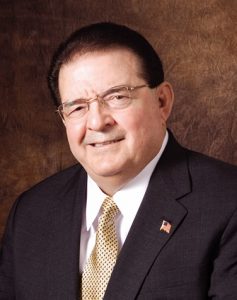 O’caña and Mission City Attorney Gus Martinez said they hadn’t been served with the lawsuit.

PSI, which is based in Indianapolis, Indiana, claimed Mission could boost revenue and reduce energy costs by replacing old equipment.

Under the plan, Mission would overhaul an old sewer plant, upgrade water meters, install LED lights and replace old heating, ventilation and air conditioning equipment. PSI said the project would pay for itself — and, if not, promised to cover any shortfall.

A majority of the City Council remained skeptical. The project appeared dead.

PSI took another shot at the project and Mission hired a Florida-based company called NV5 to review the proposal.

“The costs, we feel, are reasonable and, in fact, a good deal for the city,” Chris Halpin, the vice president of Energy Efficiency Services at NV5, told the City Council in January.

After the presentation from NV5, the City Council voted 3-2 to approve the contract.

“PSI is costing us $18 million for something that we can do on our own. We are not in the position to take on this kind of debt. If re-elected I promise to break the contract with PSI and will take them to federal court if we have to, similar to BFI,” Beto Salinas wrote in a political ad, referring to Browning-Ferris Industries, a now-defunct garbage company. “When we broke the contract with BFI and purchased our own utility vehicles, we had a $2 million dollar profit after the first year.”

More questions about PSI surfaced in May, when Mission received a federal grand jury subpoena for records on the company. The Agua Special Utility District and the La Joya Independent School District, which had contracted with PSI for similar projects, also received subpoenas.

“Federal subpoenas don’t fly out just to fly out. I do not believe that these are just investigatory,” Rick Salinas said, “I think they’re crossing Ts and dotting Is. And that makes me worried as a taxpayer in Mission.”