“It feels great”, said Juarez-Lincoln quarterback Javier Castillo when asked how it felt to be back on the field for the start of the 2021 season. Linebacker Jaime Flores echoed similar feelings. The two juniors are expected to make significant contributions to this year’s Huskies football program; one of two La Joya ISD schools that did not play football last season over concerns related to the coronavirus pandemic. 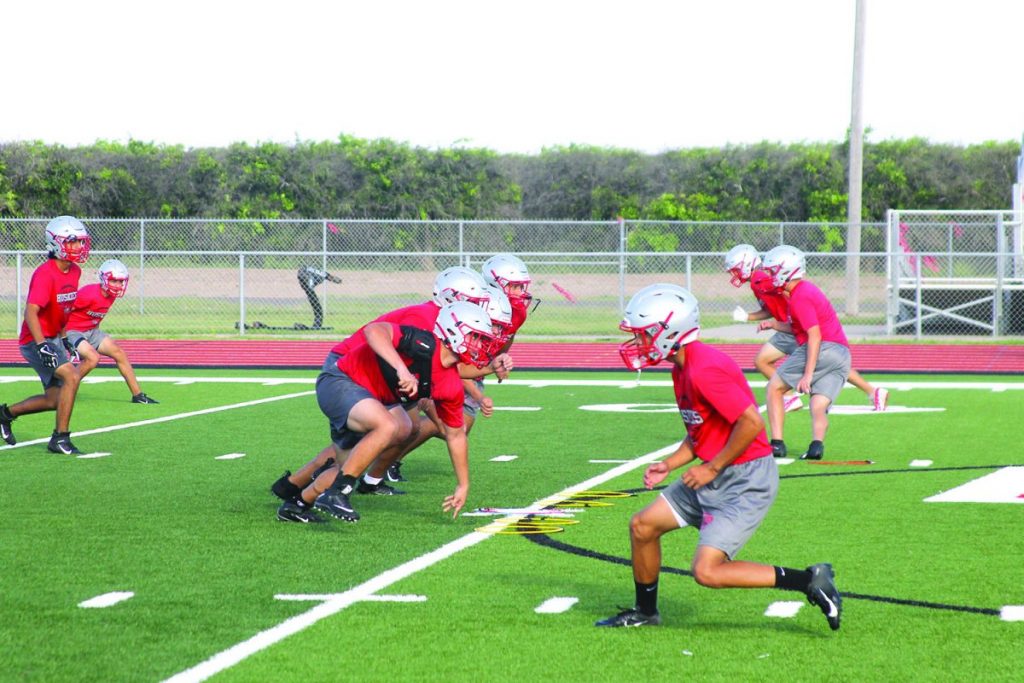 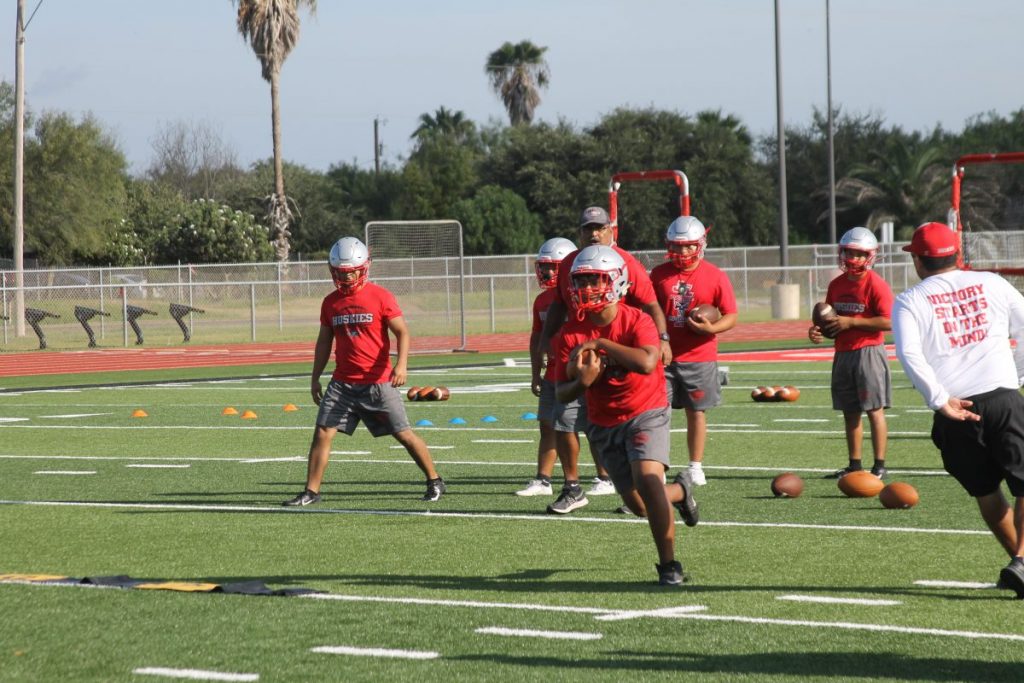 Castillo, Flores and about 60 other Huskies hit the field this past Monday morning, joining numerous other teams around the state for the official kick-off of fall practices. It was a practice that looked like any other first day of the season workout as the team practiced adjusting to formations, running plays and working on individual skills by position while classic rock music blared from the press box.
“We’re excited,” said Huskies head coach Tomas Garcia. “We’re playing football again.”
In reality, the team has been preparing for some time for the start of this season. “For the most part,” added Garcia, “our kids were here for the summer.” The Huskies, according to Garcia, went through both a strength and conditioning program and football specific workouts as allowed by the UIL in the run up to this week’s official start. Many of the players participated in a 7-on-7 league as well.
The team was also able to work on things last spring despite not getting together in person. “We did a lot of bonding with kids as far as doing things virtually,” said Garcia; adding that a number of his athletes shared videos of their own workouts to show they were getting ready for the time when getting back together became reality and running track for the Huskies in the spring when it did. His team’s summer efforts have not gone unnoticed either. “For the most part this summer I was very pleased with our numbers that came in for our strength and conditioning.”
Garcia likes what he sees in other areas as well. “This is a very close knit group,” said Garcia. “One thing that this group has is that they are going to outwork everybody; they’re going to outhustle everybody.” Garcia sees that, and the fact that his players like being around each other, as strengths for this year’s squad. “When you have that type of brotherhood, it helps out with the team.” 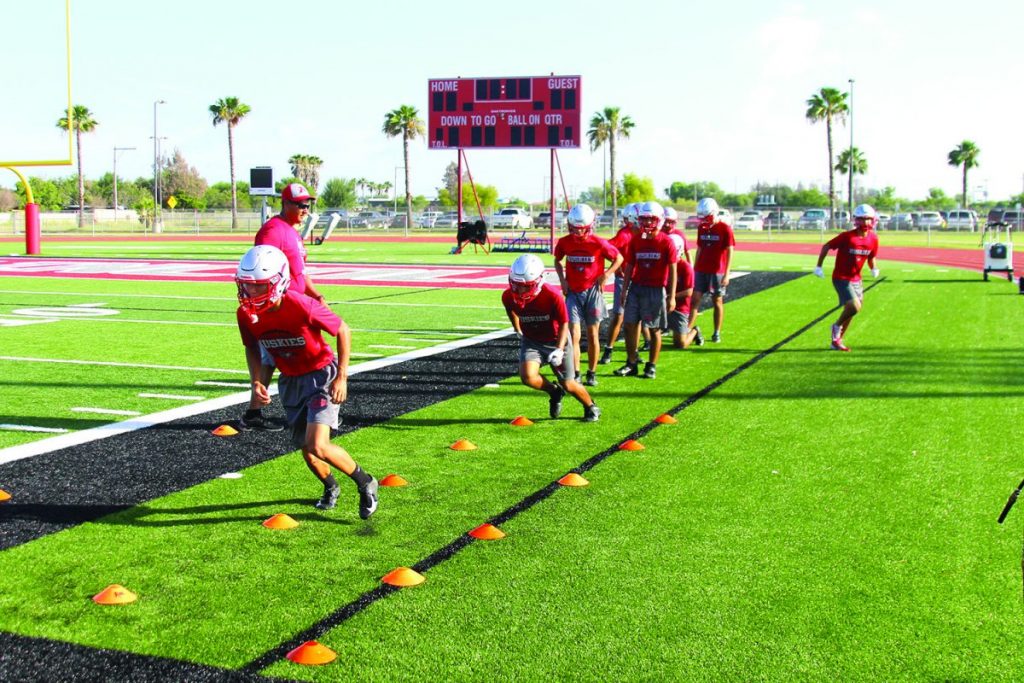 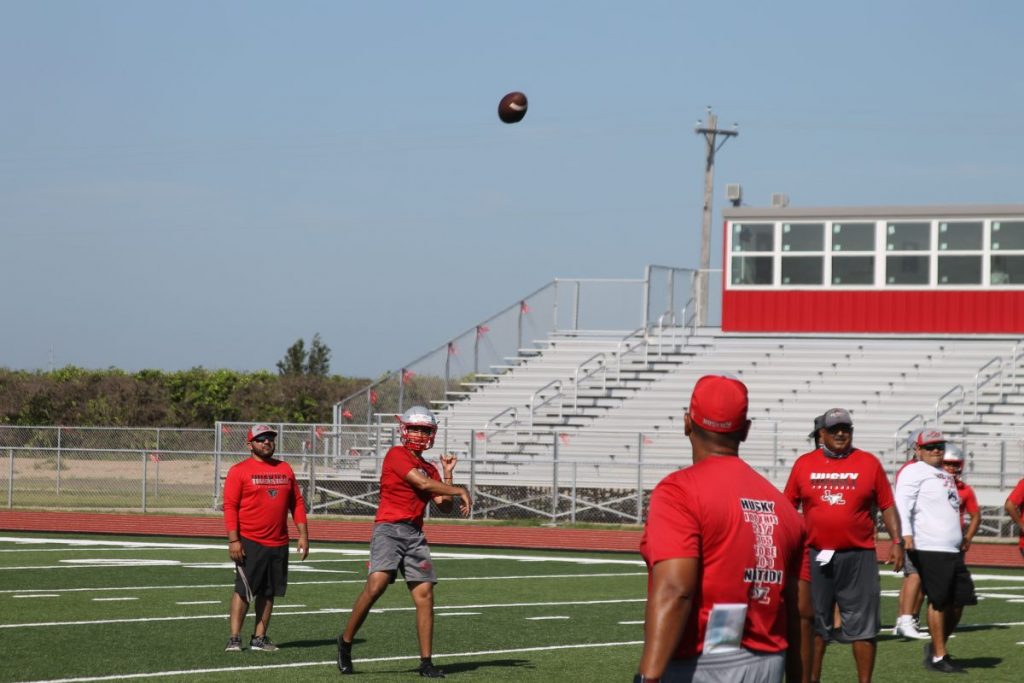 The Huskies, however, return few, if any, players with any real varsity experience and Garcia expects to start a number of juniors and sophomores once the team begins playing games. That doesn’t matter to Garcia, now in his tenth year leading the team. “Our goal is always to win district, that’s not going to change. I know we’re going to be very young but our expectations are always going to be the same.”
Having a player like Castillo on board should help. “He’s got that ‘it’ factor,” said Garcia of his quarterback. “He’s a student of the game and has a knack for the ball; he’s always improvising. He takes control of the huddle and the kids respect him. He’s the first one here and the last one to leave.”
On the defensive side of things the Huskies have Flores to lead the way. “Right now he’s a man among boys,” said Garcia. “He’s a big kid; he runs fast and has a knack for the ball.” Garcia recalled Flores’ disappointment over the cancellation of games last season. “That’s how much passion and love he has for the game and that’s what you want to see from an athlete.”
Flores said he is looking forward to the season, having done a lot of conditioning over the summer. He knows he has a role beyond his own position as well. “I’m looking forward to being a leader . . . helping everyone out. I want to make the team keep on going . . . push everyone.”
Castillo is ready to get things going as well after having to wait a year for his chance to play on the varsity level. “Unfortunately with the pandemic we couldn’t”, said Castillo. “It’s all good, you know, it was a time to focus back on what we really need to do as a team. We got back together this year and hopefully we’re going to be great; better. We’re going to come back strong and do the best that we can with this upcoming season.” Castillo acknowledged that getting there after a year off will require a big effort but believes the team is up for the challenge. “We’re putting in the work on the field right now and hopefully we’ll be great this season.”

That work will be put to the test starting next Friday when the Huskies host Mercedes in the first of two scheduled scrimmages. La Grulla visits for another on August 20. Both scrimmages are expected to be played at the Juarez-Lincoln campus. The Huskies will open the regular season with a home game against Rio Hondo on Thursday August 26 followed by a road contest against Donna North on September 3. Both are non-district games.
Garcia knows each one is important, especially with the young squad he is fielding. “That’s what the scrimmages are for. We’ve got to gel early in our scrimmages and non-district games to get ready for district.”
The Huskies are scheduled to open District 31-6A play on Thursday September 9 in Edinburg against Edinburg High. Games with fellow Big 7 teams Mission High and La Joya High are scheduled for October 8 and October 29 respectively. Both of those contests are scheduled to be played at La Joya ISD Stadium.