To say that the Pioneer Diamondbacks were successful under former head coach Tommy Lee would be an understatement. Not only did Lee lead his teams to the UIL state playoffs each of the three years of his head coaching tenure, but his Diamondbacks are coming off back-to-back undefeated district championships in which they went three and four rounds deep into the playoffs as well.

Being the last Valley team standing, as the Diamondbacks were last year, is a sure-fire indicator of a team having had a great season. And with a predominately senior team that was led offensively by a Mr. Texas Football finalist and the RGV’s all-time passing touchdown leader, Eddie Lee Marburger at quarterback, Lee certainly had all the tools he needed to make the 2020 Diamondbacks not only the most successful football team in Pioneer High School history, but also one of the few Valley teams ever to make it into the state’s elite eight. 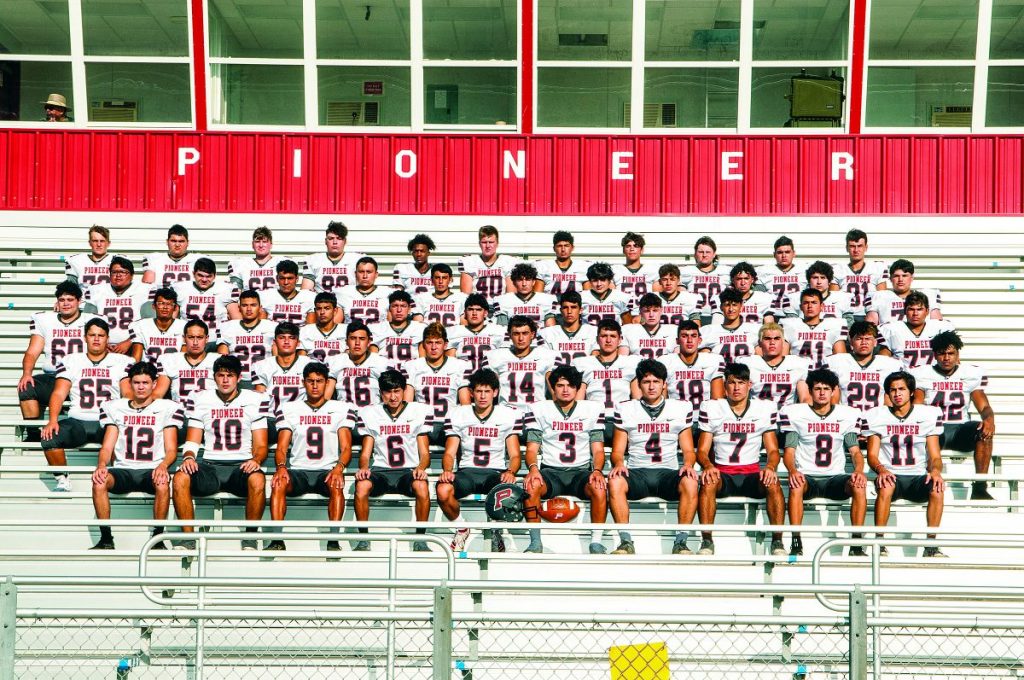 Going into the 2021 season however, 42 seniors are gone as is Lee. Not that he’s gone far, because as the new Sharyland ISD assistant athletic director, he will still be very much involved with SISD athletics. However he will no longer be calling the shots when it comes to the Pioneer Diamondback’s football program. That responsibility has been taken over by Lee’s own former offensive coordinator and quarterbacks coach, Eddie Galindo.

Galindo’s path to what is now his first head coaching position, began in his hometown of Raymondville, Texas. That was where he learned how much of an impact coaches can have on student athletes. However, it was not until he actually started coaching that he came to realize it was what he was meant to do.

“I graduated from Texas State and I’d been coaching for a while,” Galindo said. “I didn’t know if it (his coaching career) was going to happen but once I got started I knew that it was my calling. To help kids be champions in life, to help them in any way I could and mentor those guys and be a father figure. I understood that some of the best role models I had in high school were coaches and I still talk to them and I still respect them.”

Prior to coaching at Pioneer, Galindo coached at Raymondville High School and at Edinburg High. He’s been at Pioneer since the school opened eight years ago.

As the Diamondbacks’ offensive coordinator and quarterbacks coach, Galindo has played a big part in the team’s recent success. However, losing Marburger and 41 other seniors to graduation is going to make it difficult for the 2021 Diamondbacks to pick up where the 2020 Diamondbacks left off. That however is not anything Galindo is concerned about. That’s because he knows that while a team’s won/loss record is one way of measuring a coach’s success, there’s more to coaching than winning games.

“A lot of people think about the outcome but it’s one of those things where all the stars have to align,” Galindo said. “You got to have the kids and you’ve got to have the right bracket. It was a great, great, great run for us and we had some tremendous players that helped with that. And while we strive to put out a winning product, it’s about the kids and building men of character and setting a standard where they’re doing the right things on and off the field so that they’re successful in life, in the classroom and at home.”

With so many members of last year’s squad lost to graduation, the Diamondbacks have only four returning starters this year. And while all four will need to step up and take more of a leadership role than they may have in the past, there’s one player in particular that Galindo knows he’ll be able to count on through thick and thin; and that is middle linebacker Caleb Fuentes.

“Caleb is a solid, top shelf individual,” Galindo said. “He’s the one you wish all your kids at home could be like. He’s one of those that let his actions do his talking. I’m just happy that he’s part of our program. He’s like having another coach on the field. I’m just blessed to have him on the team.”

So how does Fuentes himself feel about being on a team that is pretty much pressing the reset button?

The other three returning starters on the Diamondbacks roster this year are Joseph Graham, Trevor Huddleston and Shawn Halbritter.

As a senior and as a defensive end, Huddleston is not only ready to be a leader, but he’s also ready to have the Diamondbacks’ defensive unit play a bigger role in, and get more of the credit for, the team’s success.

“I kind of take it as an opportunity to be a mentor to the younger guys,” Huddleston said. “It’s going to be in our four seniors’ hands to have a good season. I’m excited for this season and I think everybody else is too. I’m ready.”

While Graham may currently be listed on the Diamondbacks’ MaxPreps roster as a receiver, he is one of three players Galindo is considering as his starting quarterback. That is most likely why when asked what his position is, Graham likes to answer, “Athlete.”

When asked if he would like to play quarterback, Graham said, “Yes sir, whatever it takes to get the win at the end of the day.”

With COVID wreaking havoc on Valley high school football teams’ schedules last year, the Diamondbacks’ players and coaches are optimistic about getting a full 10 game season in this year. Playing a full season is just one of the things that Graham is looking forward to the most about the upcoming 2021 season.

“I’m looking forward to having a regular season again,” Graham said. “Also being able to experience pep rallies, having big crowds at the games and not having to wear a mask under my helmet.”

Senior offensive lineman Shawn Halbritter is the fourth member of the Diamondbacks’ returning starter crew. As such, he is not only ready to assume more of a leadership role on the team but he is also ready to protect whoever is named as quarterback.

“I take great pride in blocking for our quarterback,” Halbritter said. “It starts with us first. We fire up off the ball and if we don’t protect him, then someone is going to get hurt. So I take blocking everyone and making sure that people around me knows what they’re doing to heart.”

The Diamondbacks are scheduled to open their 2021 season with a non-district home game against the PSJA Bears, Thursday, Aug. 26 at 7 p.m. Their District 16 5A-2 opener is scheduled to be an away game at PSJA Memorial, Friday, Sept. 17 at 7:30 p.m.