Mission kicks off 2021 season next week

Mission High head football coach Daniel Longoria will take down The Battle of Conway trophy from its resting space in his office and take it to Hidalgo next Thursday. The trophy has been in the Eagles possession since 2018 and Longoria is hoping to bring it back that same night after the Eagles and Mission Vets have settled things in this year’s annual clash.

Next week’s match-up between the two Mission CISD schools returns to its usual spot as the season opener on each team’s schedule after numerous changes saw last year’s game played mid-season, but will be played at Bill Pate Stadium in Hidalgo due to structural concerns at Tom Landry Stadium. 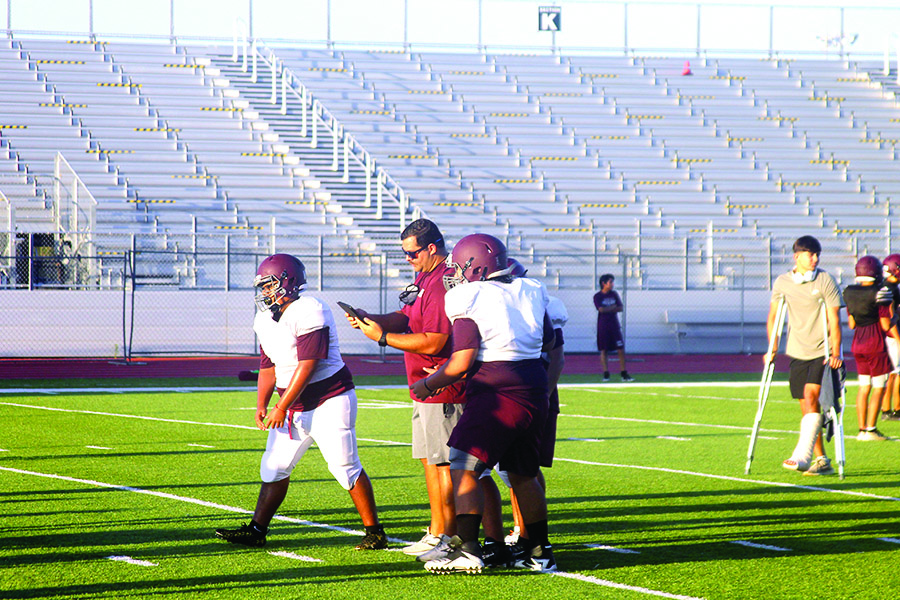 The Eagles are not looking past Vets by any means but Longoria, along with seniors Luis Balderas and Damian Cortez, kept all the talk about this year’s clash in perspective when I visited practice this past Monday.

“For us”, said Longoria, “it’s just to try and get our kids in game mode for the district season”, adding that playing a tough, physical, well coached opponent like the Patriots is exactly what he wants to open the season. “In the past . . . we tried not to put too much stake in it but that’s almost impossible. But at the end of the day I think it’s a good measuring stick of how well our season can go or things that we can improve on because, to me, them being a well-coached team is what is going to get the most out of our kids.” 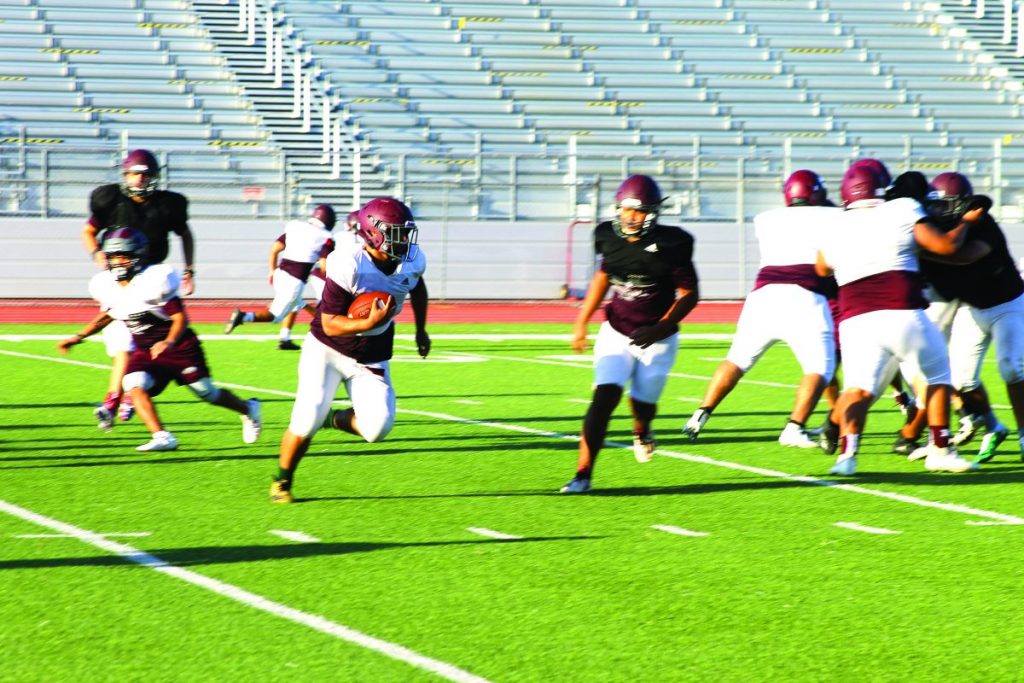 Balderas talked about the respect he has for their sister school and while acknowledging the rivalry between the two, said he will treat it like any other game. “We’re going to go out there; we‘re going to be resilient. We’re going to work hard and were just going to defeat the team as best as we can.”

Cortez said he was looking forward to a good competitive game. “It’s going to be fun.”
Whatever the outcome there are sure to be several things that Longoria , in his first season at the helm of the Eagles, is going to be able to find out about his team next week.

Most of the personnel responsible for last season’s high scoring offense and bone jarring defense are gone and how the newcomers respond will be a big key this year. Longoria, a member of the Mission staff since 2017, has been pleased with what he has seen since taking over last spring.

“At this point I think our strength is our senior leadership,” said Longoria. He mentioned how the group has been there throughout the summer in preparation for the season. “They’ve been role models.”

The senior group has big game experience to boot. Both Cortez and Balderas have been playing varsity ball since their sophomore year; seasons which saw the Eagles win a share of the district title in 2019 and claim a bi-district championship last season. The two are part of a group of ten returning starters for the 2021 Eagles, five each on offense and defense; all seniors.

Both are ready for a big season.

“This year we have a lot of young guys” said Balderas, “but a lot of guys stepped up during the spring and we should have a big upcoming team like we do every year.” Balderas, a linebacker, had this to say about what fans should expect from the Eagles defense this season. “Mission High School defense is gritty, resilient and it’s still going to be the same way.”

Cortez shared a similar thought about the team’s younger players and likes the progress the team is making. “We’re just getting better every day.”

Both of the seniors shared their thoughts about their roles as team leaders as well. “We just want to lead them (the younger players),” said Cortez, “make sure we set a good example for them.”

Balderas also emphasized the importance of leading by example and keeping the Eagles winning traditions in place. “We want to keep that history here at Mission High School.”

Besides the new players on the field, the Eagles also have to deal with playing ten road games due to the previously mentioned issues at Tom Landry Stadium. Longoria is ready for that as well, having been a part of the staff that had to go through a similar situation in the 2017 season. He also feels grateful that there are ten games currently on the schedule.

“I’m going to be very positive,” said Longoria,” because we have ten road games and not a limited season like we had last year with COVID.” He went on to say that the Eagles do have a home this season, albeit not in Mission. That’s because five of their games will be in Hidalgo. Even their other five games will be played in familiar surroundings. The Eagles will play three times at Edinburg’s Cat Stadium and twice at La Joya’s’ Pack stadium.

After the season opener with Vets (next Thursday at 7 pm), the Eagles face Weslaco High in Hidalgo the following Thursday (September 2) to complete the non-district portion of their season.

District 31-6A play starts in Week 3 for the Eagles when they travel to La Joya to face the Coyotes on Friday September 10. They will be back in La Joya on October 8 to take on fellow Big 7 opponent Juarez-Lincoln. The Eagles will not have a week off until Week 9 on the UIL’s 11 week schedule. Two of the district’s top teams (Edinburg Vela, PSJA North) await the Eagles after their break to conclude the regular season. Longoria hopes for more after that.

“The expectations are for us to get to the playoffs,” said Longoria. Getting there, according to Longoria, will require a focus on preparing one game at a time as well as maintaining the health of his players and improving the depth of his team.

It all starts with next week’s clash against the Patriots and making sure that a certain trophy comes back to his office next Thursday night.