High school football is back across the state of Texas as Week 1 games are now in the books. And of the seven teams from the Mission, Sharyland and La Joya school districts, the Big 7, four opened their respective seasons with wins. While that of course means that the three remaining teams all lost, two of the three fell to fellow Big 7 teams in head-to-head matchups. As a result, the Big 7 had four out of five possible winners in Week 1.

When it comes to Valley high school football teams, getting off to a good start is always important. But with two of the Big 7 teams having cancelled their entire seasons last year and the other five having had their seasons delayed and drastically shortened, all because of COVID, it wouldn’t be surprising if some of them stumbled coming out of the starting blocks. But thanks to their coaches’ and players’ dedication and hard work, four Big 7 teams are looking to go 2-0 this week. As for the other three, they’re hoping to get on the winning track this week because a 1-1 start sure beats going 0-2.

So which Big 7 teams won, which lost and what does this week’s slate of games look like? That’s what we’ll be delving into here next, but with two exceptions; the Sharyland Rattlers and the Mission Eagles. That’s because the Eagles played their Week 2 game against the Weslaco Panthers last night, and the Rattlers’ Week 2 matchup, against Brownsville Hanna, is being previewed separately as our Big 7 Game of the Week.

The Huskies are the only Big 7 team that opened their 2021 season with a loss to a non-Big 7 team. They lost to the Rio Hondo Bobcats by a score of 65-0. While the Huskies are one of the two Big 7 teams that cancelled their entire season last year, the Bobcats did the same. Therefore the lopsided score cannot be attributed to that; especially when you take into account the fact that Juarez-Lincoln is a 6A team and Rio Hondo is a 4A team. However, having qualified for the playoffs 14 out of their previous 15 seasons, the Bobcats are not your run of the mill 4A team. As a matter of fact, Rio Hondo could most likely hold their own against quite a few of the Valley’s 5A and 6A teams on any given week.

The Huskies will be looking to bounce back this week against the Donna North Chiefs. The Chiefs had their season opener against the Donna Redskins cancelled for the second year in a row due to COVID concerns. Should the game go off as scheduled, it will be played tonight at 7:30 at Bennie La Prade Stadium in Donna.

Despite having led in their season opener by three points late in the fourth quarter, the Coyotes find themselves at 0-1 after their 24-20 loss to the Palmview Lobos. La Joya overcame a 17-7 deficit at the end of the third quarter on a short scoring run by Ivan Garces, making the score 17-14, and on quarterback Tristen Trevino’s second rushing score of the night. That made the score 20-17 in favor of the Coyotes with just over two minutes left to play. However, the Lobos answered right back when they drove 63 yards down the field to win it on a 22 yard touchdown pass from Christian Reyna to Tony Villarreal with 54.5 seconds left in the contest.

The Coyotes will be looking to bounce back tonight when they take on the 1-0 La Feria Lions at Lion Stadium in La Feria. The Lions opened their 2021 season with an impressive 44-26 win over the Raymondville Bearkats. Tonight’s game is scheduled to kick off at 7:30. 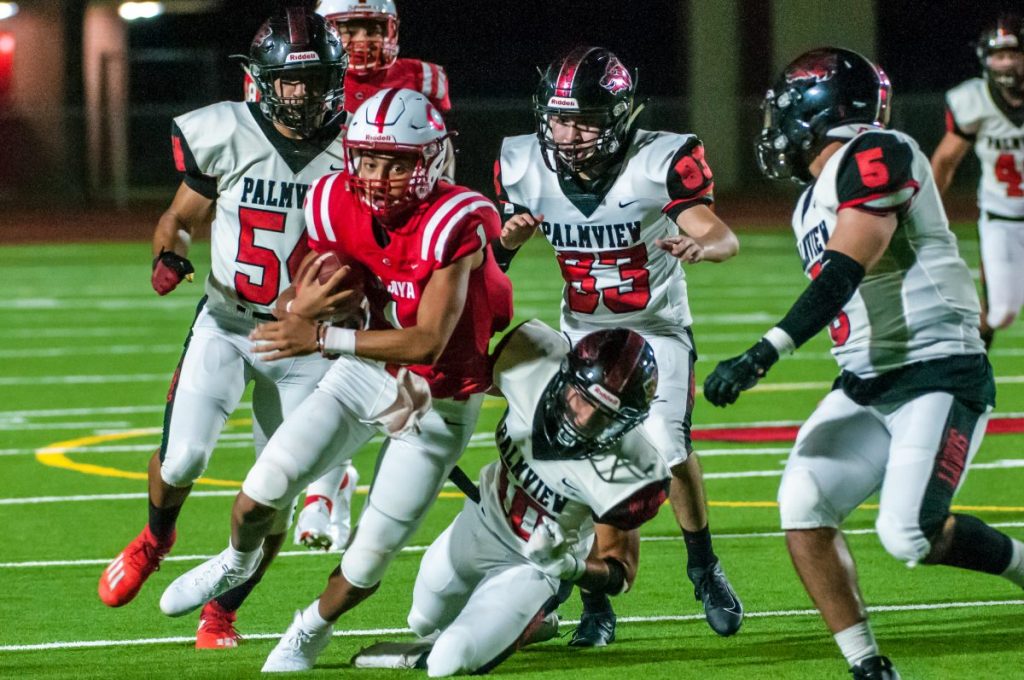 As previously mentioned, the Palmview Lobos opened their 2021 campaign with a come from behind 24-20 win over the La Joya Coyotes. The Lobos’ defense stifled the Coyotes passing game allowing only three completions on 13 attempts for a total of 23 yards passing.

With that win, the Lobos have already surpassed last year’s win total when they went 0-3 in a COVID shortened season. If Palmview is going to improve to 2-0, they will have to do so at the expense of the 0-1 Nikki Rowe Warriors. Rowe lost their season opener by a score of 20-13 to the San Benito Greyhounds. Having 18 completions on 32 attempts for 271 yards last week, the Warriors are much more of a passing team than the Coyotes are. Therefore the Lobos’ key to victory could very well be stopping the Warrior’s senior quarterback, Mateo Llanas and his favorite target, junior wide receiver Nelson Ramirez who caught seven passes for 108 yards against the Greyhounds.

The Warriors at Lobos game is the District 16-5A Division 1 opener for both teams. It is scheduled to kick off at 7 pm tonight at LJISD Pack Stadium.

The Pioneer Diamondbacks opened their first season under head coach Eddie Galindo with a 14-12 victory over the PSJA Bears. Senior quarterback Angelo Bazan took most of the snaps for the Diamondbacks completing 15 of 30 pass attempts for 215 yards and two touchdowns. Sophomore Julian Valdez completed two of seven pass attempts for eight yards, but also carried the ball seven times for 35 yards.

The Diamondbacks will be looking to continue their winning ways tonight as they host the Harlingen South Hawks at 7:30 pm at Richard Thompson Stadium. The Hawks opened their 2021 season with a 34-9 win over the Brownsville Veterans Memorial Chargers. 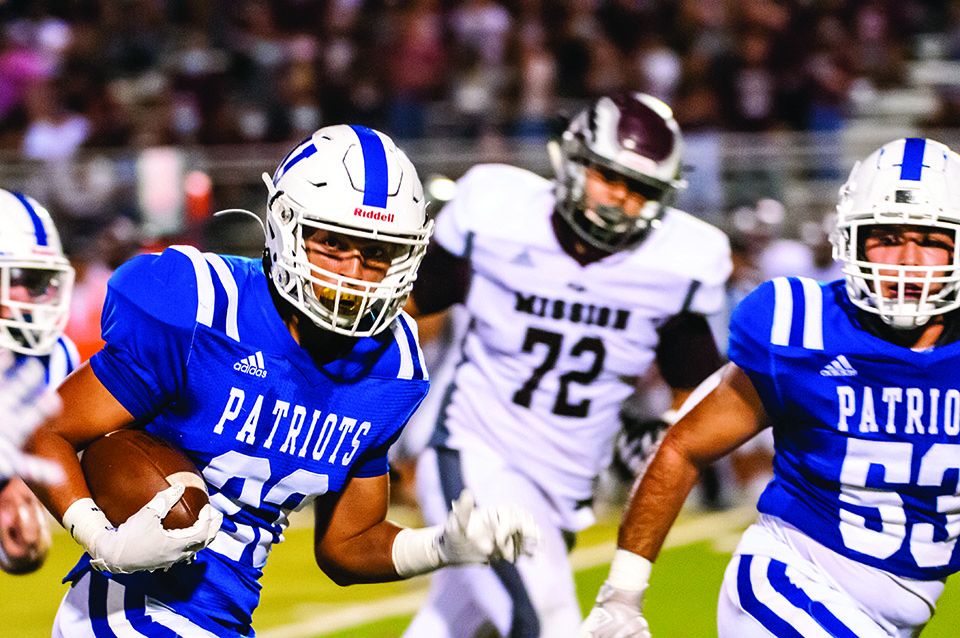 The Mission Veterans Patriots fell just short of turning the tables on the Mission Eagles at Bill Pate Stadium in Hidalgo last week in what was formerly referred to as the Battle of Conway. The Mission CISD Football Showcase game may be this annual cross-town rivalry game’s new name, but on the field not much has changed as the Eagles emerged victorious against the Patriots for the fourth year in a row.

Even so, Mission Veterans did make it especially close this time around. With the final score being 13-12, it would be easy to assume that the game was a defensive battle. However, Patriots’ senior quarterback Ricky Reyna did complete 20 of 46 passes for 252 yards and two touchdowns. But with six interceptions on the night, the Eagles managed to keep the Patriots out of the end zone on all but two drives.

Tonight the Patriots will be travelling to San Benito to take on the Greyhounds. San Benito is coming off a 20-13 win over the Nikki Rowe Warriors. That game is scheduled to kick off at 7 pm.