A judge on Monday rewarded a Rio Grande Valley woman for “extraordinary cooperation” with federal agents during a public corruption investigation.

“I applaud your cooperation,” Ellison said Monday morning, when Salinas appeared before him for sentencing at the federal courthouse in Houston.

Salinas and her friend, a former FBI informant named Carmen Saldaña Meyer, participated in a conspiracy to steal cocaine from the Gulf Cartel. Corrupt law enforcement officers covered up the thefts by staging fake drug busts.

After her arrest, however, Salinas cooperated with federal prosecutors. 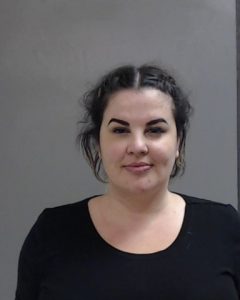 She told them how the conspiracy worked. She testified against Saldaña at trial. And she played a major role in the public corruption case against former La Joya police Chief Geovani Hernandez.

“Of all the defendants in this case, Ms. Salinas provided the most extraordinary cooperation out of everyone,” Assistant U.S. Attorney Casey Nicole MacDonald said during the sentencing hearing.

The second-youngest of six children, Salinas was born in Monterrey. Her family moved to the United States when Salinas was just a few months old.

Her mother, several of her siblings and at least five of her cousins worked for drug trafficking organizations, Salinas testified during a July 2019 trial, according to the transcript.

“I didn’t want that type of life that I grew up with, and I never had the need to,” Salinas said, according to the transcript. “I would try to stay away.”

While she wasn’t involved in the day-to-day business of drug trafficking, Salinas dated at least two cartel bosses.

During the trial, Salinas claimed she dated Heriberto Lazcano-Lazcano, the head of the Zetas; and the cousin of a Gulf Cartel commander, who she called “Tite.”

When she wasn’t dating cartel bosses, Salinas managed a bar and grill in the Valley.

De Leon also had a side business: stealing drugs from the Gulf Cartel.

Smugglers would pay De Leon to transport cocaine from the Rio Grande Valley to Houston.

Instead of transporting the cocaine, De Leon and his associates would steal it. They always kept a small amount, which they mixed with other white, powdery substances and repackaged into new bundles.

To cover up the thefts, they placed the bundles of fake cocaine in abandoned cars and paid corrupt law enforcement officers to seize them.

The scheme involved two Border Patrol agents, an Edcouch police lieutenant, an Edinburg police officer and two Houston-area cops. After they seized the fake cocaine, members of the drug trafficking organization would provide smugglers with police reports — and claim the drugs had been seized, not stolen.

Saldaña, the FBI informant, also participated in the scheme. She delivered police reports to drug smugglers in Reynosa. Salinas, who had known Saldaña for years, also became involved.

The smugglers, though, eventually became suspicious. They kidnapped Carlos Oyervides, who coordinated the fake drug busts.

After he was rescued by the Mexican military, Oyervides met with U.S. Immigration and Customs Enforcement. He told agents everything.

Agents set up a sting operation.

With assistance from Saucedo-Rodriguez and Salinas, they caught Hernandez attempting to provide security for a drug shipment.

Attorney Erik R. Sunde of Houston, who represented Salinas, said prosecutors had filed a “5K” motion to reduce her sentence.

That section of the U.S. Sentencing Commission guidelines involves “substantial assistance in the investigation or prosecution of another person who has committed an offense.”

Sunde asked Ellison, the federal judge, to consider a sentence of time served.

“Ms. Salinas has been on bond for approximately six years in this case,” Sunde said. “During the course of those years, she has cooperated to the best of her ability. There are some significant results of that cooperation.”

When the judge asked whether or not she wanted to speak, Salinas apologized.

“I’ve been cooperating to the best of my knowledge ever since I was involved in this situation,” Salinas said. “I won’t re-offend.”

Ellison warned Salinas that time served was a lenient sentence for someone who pleaded guilty to drug trafficking.

“And the same treatment cannot be expected if you are before the court again,” Ellison said. “Do you understand?”

Salinas said that she understood.