It was easy to both see and hear how excited the fans of La Joya High were for the return of their Coyotes to the gridiron two weeks ago when the team welcomed La Joya Palmview to the La Joya ISD Stadium for their first game since November of 2019. Talk about being ready for some football!

I won’t be surprised if the fans come out in force again and get just as loud or louder when they greet their team tonight. And why not; it’s the District 31-6A opener and the team is coming off a 12-7 victory last Friday over Kingsville King. Add tonight’s opponent, the Mission Eagles, and their fans, into the mix and let’s face it; the atmosphere tonight could be absolutely electric.

That much in and of itself is probably enough motivation to check this game out, but there are many other reasons as well.

La Joya hasn’t defeated the Eagles since 2016 and in 2019, the last time the two teams played, the Eagles win gave them the opportunity to celebrate a share of the district title on the same field as tonight’s game will be played on.

That’s not to say that the Eagles can just show up tonight and win their fourth straight over the Coyotes however. A lot has transpired since the last time these two teams met. The Eagles have a new head coach for one. The Coyotes have close to a whole new team after not playing in 2020. Two games into the 2021 season finds each team in a similar place. 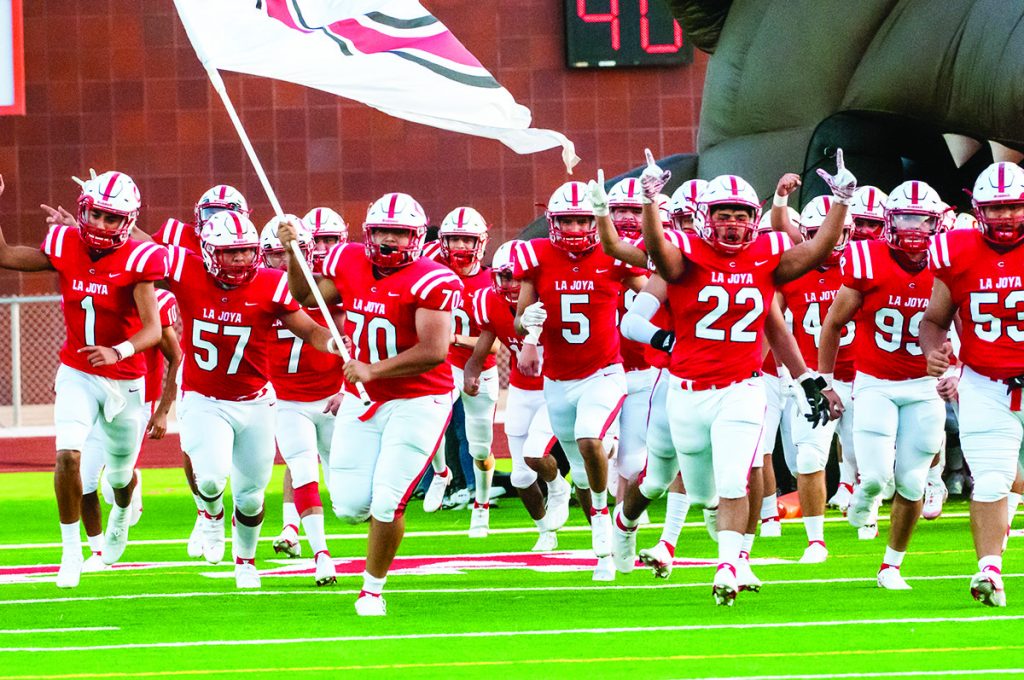 The La Joya Coyotes will be looking to win their second game in a row tonight as they take on the Mission Eagles at LJISD Stadium. Progress Times photo by Luciano Guerra

Both the Coyotes and Eagles come into tonight’s game with 1-1 records. The four games played by the two so far this season have all been close, one possession affairs, with plenty of fourth quarter drama. Each has been decided by five points or less. Tonight could be another nail biter.

The Coyotes trailed both La Joya Palmview and Kingsville King in their two games and rallied to take the lead in both. A late Palmview score doomed the Coyotes in their season opener but they held on to their lead last week to get the win.

The Eagles were tied at halftime with Mission Veterans in their season opener; took the lead in the third quarter and made it stand after Veterans closed the gap in the fourth for a 13-12 win over the Patriots. Last week, the Eagles trailed early and took the lead late but gave up a late score in their loss to Weslaco.

So what could we see before it’s all over tonight? The coaches of each team shared their thoughts on the subject when I spoke with them earlier this week.

“We all want to win our first district ball game,” said La Joya’s Reuben Farias. “Every district game counts.” The sixth year head coach went on to emphasize the importance of playing good, sound football on both sides of the ball and to avoid making mistakes. Farias also talked about the mental side of the game. “We just have to remain with ourselves . . . play together, believe in one another, be united and trust one another . . . and if we make mistakes try to just get over it and not dwell on it.”

The Coyotes have been led on offense by quarterback Tristen Trevino who leads the team with three rushing touchdowns. Ivan Garces has scored twice, one from a run and the other on a pass from Trevino. Both are seniors.

Farias has been happy with the progression of the Coyotes running game as well as how Trevino has played in his first year under center for the Coyotes varsity. “He makes us click,” said Farias, adding that he sees him getting better each week. Trevino, according to Farias has a great work ethic that serves as an example to the rest of the team and though he is not the most vocal player; “When he speaks, people listen.” Farias felt a key to tonight’s game would be the Coyotes ability to control the clock when on offense to keep the Eagles offense off the field.

Farias credited his defense for keeping the Coyotes in the game last week against Kingsville until the offense got going but says the unit needs to do a better job getting off the field in third down situations.

Mission High’s Daniel Longoria echoed the importance of getting a win in the district opener. “First you’ve got to win your season opener in district,” said the first year head coach of the Eagles. “It’s a big must for us. It’ll put us on the right path to meeting one of our goals, which is to get to the playoffs.”

Longoria also spoke about the importance of playing mistake-free football and winning the turnover battle as well. Longoria feels his offense needs to get better taking advantage of the opportunities his defense creates when they get a takeaway. “We’ve got to do better in the red zone.” 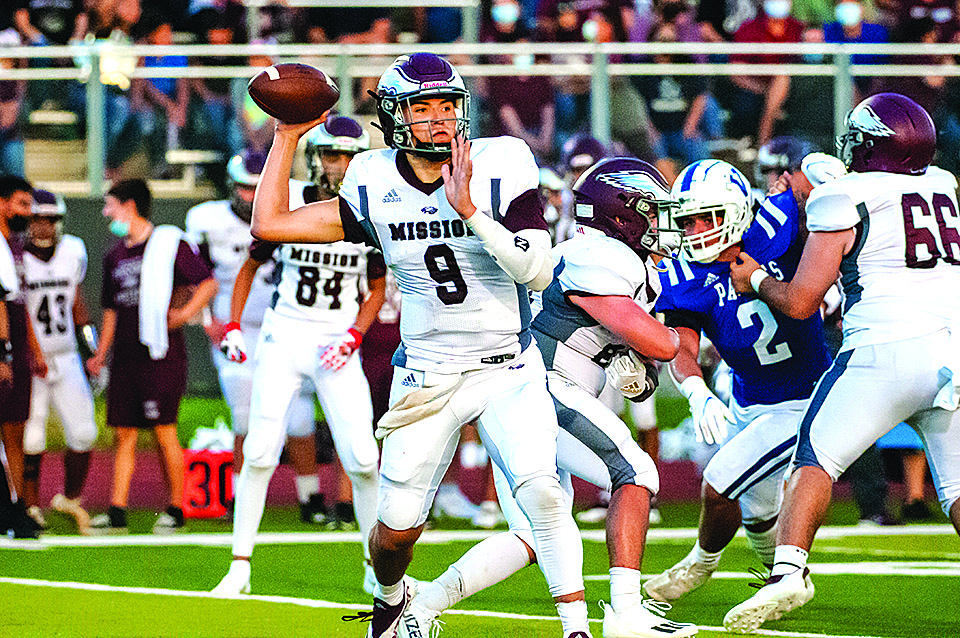 Mission quarterback Kevin Guerra will be leading the Eagles offense tonight as they take on the La Joya Coyotes at LJISD Stadium. Progress Times photo by Luciano Guerra

The Eagles offense is led by senior quarterback Kevin Guerra who has tossed four scoring passes in the teams’ first two games, three to junior Josiah Guzman. Guerra has a rushing score as well. Longoria says, however, that what Guerra has accomplished since joining the Eagles goes beyond just numbers on a stat sheet. “I think Kevin has done a really good job considering that he moved to Mission during the COVID pandemic . . . and having to adapt and adjust to a brand new school and a brand new environment for him I think he’s doing a great job of adjusting to it.” Guerra moved to Mission after previously playing at Rio Grande City.

Longoria likes the way his team’s defense is playing but also feels that the team’s fourth quarter comeback last week (although short-lived) revealed something more. “The character of the team showed even though we lost last week . . . it’s what I feel is going to pay dividends, in my opinion, throughout the season.”

Kickoff for tonight’s contest is scheduled for 7:30 pm at the La Joya ISD Stadium.