Former La Joya Mayor Fito Salinas, who pleaded guilty to a federal wire fraud charge, is eligible for probation, according to a motion filed by his attorney.

Salinas — a two-term mayor who dominated local politics for nearly a decade — is scheduled for sentencing on Sept. 28. He faces a maximum of 20 years in federal prison.

Attorney Richard Zayas of Brownsville, who represents the former mayor, filed a motion on Sunday that argued Salinas is eligible for probation.

Salinas “clearly demonstrated acceptance of responsibility,” according to the motion, which objected to parts of the pre-sentence investigation report prepared by the U.S. Probation Office.

The motion rejects any suggestion that Salinas is responsible for schemes that involved the La Joya Housing Authority and the La Joya Economic Development Corp. 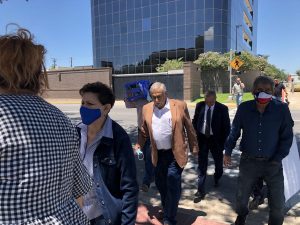 The FBI arrested Jose A. “Fito” Salinas, 83, of La Joya in February 2020 after investigating corruption at City Hall.

The indictment against them detailed schemes to defraud the city of La Joya, the housing authority and the La Joya EDC.

Frances Salinas and Ramiro Alaniz pleaded guilty to wire fraud charges. The case against Garces Valdez, who cooperated with the government from the beginning, remains unresolved.

Zayas and two prosecutors went through the process of picking a jury. Before the jury could be seated, however, Fito Salinas changed his mind.

Fito Salinas confessed to participating in a scheme that involved a public relations contract.

La Joya cut a $12,000 check to Garces Valdez the next day, according to documents released under the Texas Public Information Act. Garces Valdez cashed the check and slipped $7,000 to Frances Salinas, according to a criminal complaint filed in December 2019.

After he confessed, the U.S. Probation Office started working on a pre-sentence investigation report.

The report, which is confidential, provides the court with information about a defendant’s background, family, education, work history and health.

Along with biographical information, the report sometimes includes a summary of “other criminal conduct” that involved the defendant. The section covers everything from charges dropped by the government as part of a plea agreement to unproven allegations that never became public.

Zayas filed a 19-page motion on Sunday that objected to parts of the report.

Attorneys often file their objections under seal because the objections disclose parts of the report. Zayas didn’t.

In the motion, Zayas attacks Count 3 of the indictment, which alleged that La Joya purchased Salinas’ house for an inflated price.

“The City of La Joya acquired an appraisal from a Licensed General Real Estate Appraiser who valued the property at $692,100.00,” according to the motion. “The government has not provided their own valuation of the property, just merely stating that in their opinion, the value is inflated.

“The PSR correctly states that Defendant and his wife sold the property for $235,000.00,” according to the motion. “Thus it appears that the property was undersold for ($457,100.00) which was a benefit to the City of La Joya who was not damaged in any way by the purchase of said property.”

That appraisal, though, didn’t value the mayor’s house based on the price of residential property in La Joya. It compared the house to commercial property on Expressway 83 and Taylor Road.

In the motion, Zayas also claimed that Fito Salinas didn’t know his daughter was involved in schemes to defraud the housing authority and the La Joya EDC. As a result, Zayas argued Fito Salinas shouldn’t be held responsible for her wrongdoing.

U.S. Sentencing Commission guidelines suggest that Fito Salinas receive a sentence of 4 to 10 months, Zayas wrote in the motion, which makes him eligible for probation.

Sentencing is scheduled for Sept. 28.