After meeting with three applicants, the utility board selected Mission Public Works Director Roberto J. Salinas for the job.

“He was the most qualified,” said utility board President Homer Tijerina.

The utility board agreed — and voted 6-0 to make Salinas the general manager. Director Adolfo Arriaga didn’t attend the meeting.

About 16,500 customers in western Hidalgo County and part of Starr County depend on Agua SUD for water and sewer service.

The general manager supervises about 70 employees, oversees the operation of three water treatment plants and handles a nearly $11 million budget.

Agua SUD also provides sewer service in Sullivan City and Palmview, where contractors are connecting homes to a sewer system that remains under construction. 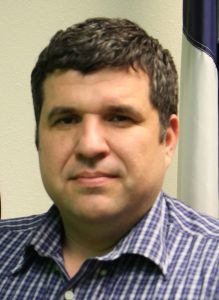 Roberto J. Salinas. (Photo courtesy of the city of Mission.)

After graduation, Salinas accepted a job with the Texas Department of Transportation.

In 2006, he left the Department of Transportation for the city of Mission.

Salinas became a systems engineer for the Public Works department, according to documents released under the Texas Public Information Act. Along with Public Works projects, Salinas provided engineering services to other city departments.

The job description included everything from reviewing subdivision plans to briefing the City Council on engineering issues.

In 2010, when the Public Works director retired, Mission selected Salinas to replace him. The job came with a wide range of responsibilities.

The La Joya Independent School District hired the company in 2017.

The company also worked for Agua SUD in 2017. At one point, Agua SUD considered outsourcing the management of water and wastewater treatment plants to RGV Water Works.

Interim General Manager Richard LeFevre, who reviewed the proposal, concluded RGV Water Works was “too costly,” according to a summary of his accomplishments LeFevre submitted when he resigned.

La Joya ISD terminated the contract with RGV Water Works in December 2018. At the time, members of the school board emphasized they had no problem with Salinas and simply wanted to reduce costs.

Salinas also did engineering work for La Joya ISD. Among other projects, he supervised the installation of LED lights by Performance Services Inc., an Indiana-based company that specializes in “energy savings” contracts.

The general manager position at Agua SUD will bring Salinas back to western Hidalgo County. First, though, he must bid farewell to Mission.

“I’m very appreciative of the city of Mission,” Salinas said. “I can’t say enough about the experience the city has given me.”