Week 6 of Big 7 football is upon us

With this being Week 6 of Valley high school football, the mid-point of the 2021/2022 season is upon us. While some teams have played one game more or less than others, depending on when they each had their bye weeks scheduled, going into this weekend, five weeks of games are in the books and after this weekend, five weeks of games will remain to be played. With that in mind, we will now be taking a look at how each of the Big 7 teams have fared so far, where they each find themselves in the standings and key matchups the contending teams still have on their upcoming schedules.

We will begin by taking a look at the two Big 7 teams that are winless in district play and we will end with the three teams that are undefeated in district play, through Week 5. While it is still a bit premature to say that the winless teams are only pretenders and the undefeated teams are truly contenders, another loss or two by the winless teams and another win or two for the undefeated teams, will all but make those designations a reality.

The 0-4 (0-2) Juarez-Lincoln Huskies are the only Big 7 team to be O-for-the-season thus far. Their losses have come at the hands of Rio Hondo (65-0), Donna North (38-14), Edinburg High (48-0) and PSJA High (49-10). The Huskies, who played at the 1-4 (0-3) Edinburg Economedes Jaguars last night, still have some winnable games on their remaining schedule, even if they lost last night. But based on how the District 30-6A teams have played thus far, the Jaguars could very well be the Huskies’ best shot at coming away with a win against the rest of the way out.

The 1-4 (0-3) La Joya Coyotes opened their 2021/2022 season with a heartbreaker of a loss against the Palmview Lobos (24-21). They followed that up with a 12-7 win against Kingsville King, in a game that was scheduled at the last minute after their previously scheduled game against La Feria was cancelled. Since then the Coyotes have come up on the short end of the score against the Mission Eagles (42-20), the Edinburg Vela Sabercats (69-7) and the PSJA North Raiders (63-0). The Coyotes have a bye this week but are scheduled to take on the 2-3 (1-2) Edinburg North Cougars next Friday.

The 2-3 (1-3) Palmview Lobos have fared better than their two sister schools’ teams, but with six teams ahead of them in the District 16-5A Div. 1 standings, and with only five games remaining on their schedule, they have put themselves in what’s pretty much a must-win situation from here on out.

The Lobos do have a bye this week, but with what seems to be one of their two most winnable games coming up next week, 1-4 (0-4) Brownsville Porter, and the other not coming until Week 11, 0-5 (0-4) Brownsville Lopez, Palmview could remain in contention for a playoff spot if they take care of business against both of those teams and also manage to defeat at least one, but preferably two, of their other three remaining opponents, 3-1 (3-1) Weslaco East, 4-1 (3-1) McAllen High and 2-3 (2-2) Brownsville Pace. 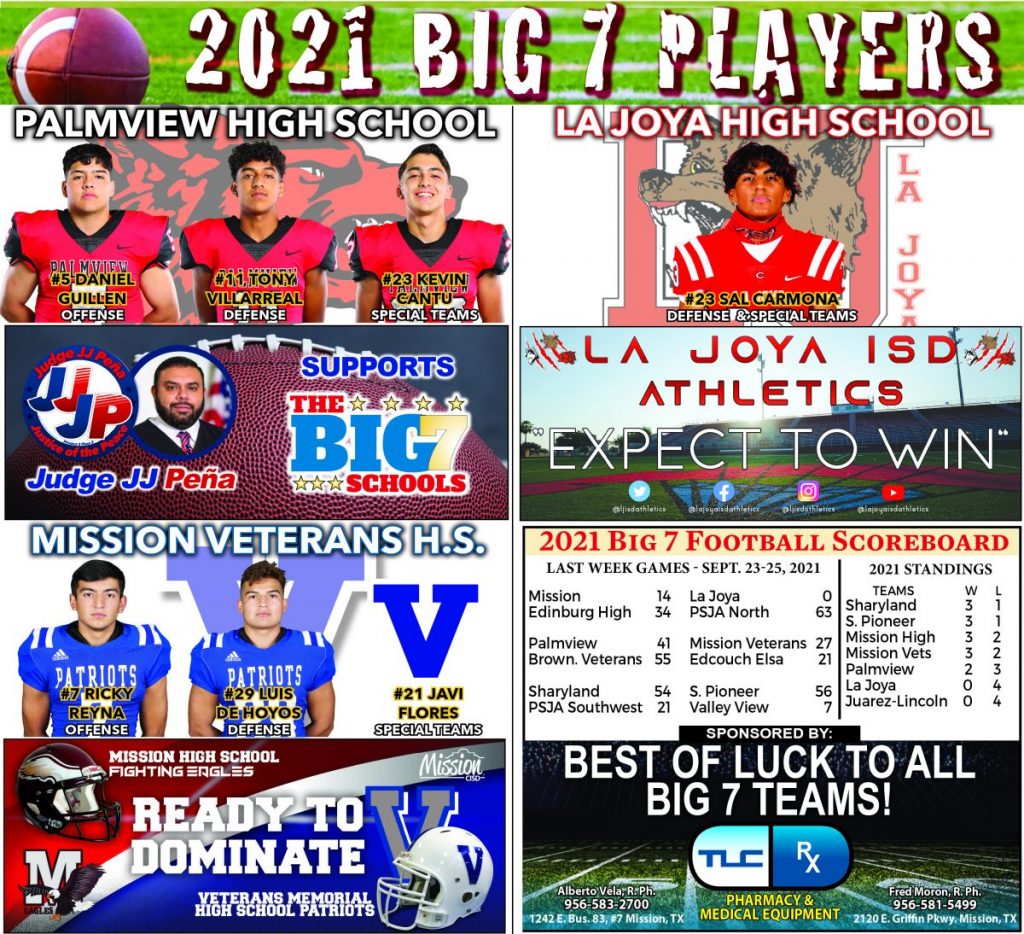 The good news is that the Eagles still control their own playoff destiny. That’s because they still have two of the three teams ahead of them in the standings on their schedule. Those two teams being the PSJA Bears, who the Eagles take on tonight in the Progress Times game of the week, and the Vela Sabercats, who will be hosting the Eagles in Week 10. One thing that could work out very well in the Eagles favor is the fact that they will have two weeks to prepare for the Sabercats since their bye falls on Week 9 this season.

Four of the nine teams in District 16-5A Div. II are undefeated in district play and the 3-2 (3-0) Mission Veterans Patriots are among them. Their three district wins came against Valley View (59-14), Roma (48-3) and most recently Edcouch Elsa (27-21).
On the Patriots’ schedule this week is the 3-1 (2-0) Sharyland Rattlers. That game was originally scheduled to be played in Mercedes, but will instead be played at Richard Thompson Stadium tonight.

The other two undefeated teams in the district are the 3-1 (2-0) Pioneer Diamondbacks and the 5-0 (3-0) Mercedes Tigers. The Patriots are scheduled to take on those two teams in back-to-back weeks. First up will be the Tigers in Week 9 and then the Diamondbacks in Week 10. The fact that the Patriots have a bye scheduled in Week 8 should help Coach David Gilpin’s boys be in top form when they take on what could be their two toughest opponents of the season.

As previously mentioned, the Pioneer Diamondbacks are one of four undefeated teams in District 16-5A Div. II play. Their two district wins thus far came against PSJA Memorial (27-15) and Valley View (56-7).

First year Diamondbacks’ head coach Eddie Galindo, who inherited a team that lost over 40 seniors from last year’s state quarterfinals qualifying squad, not only has his team in the thick of the playoff race, but also smack dab in the middle of the fight for the district championship. Whether or not he will be able to keep his team in contention for both of these worthy achievements will depend a lot on how the Diamondbacks fare against the trio of undefeated teams that still remain on their schedule; the Sharyland Rattlers (Week 8), the Mission Veterans Patriots (Week 10) and the Mercedes Tigers (Week 11).

With district wins against Edcouch-Elsa (31-21) and PSJA Southwest (54-21) the Rattlers may not have chalked up victories against two of the district’s powerhouses, but they’ve done all they could do; win the games on their schedule. How they fare against the Mission Veteran Patriots tonight however should go a long way to determining whether the Rattlers will continue being among the teams vying for a district title, or among the teams battling it out for one of the four playoff spots. And with games against the 5-0 (3-0) Mercedes Tigers and the 3-1 (2-0) Pioneer Diamondbacks on the Rattlers’ schedule the next two weeks, Coach Krell’s Rattlers could find themselves atop the District 16-5A Div. II heap all by themselves should they find a way to continue their winning ways through Week 8. 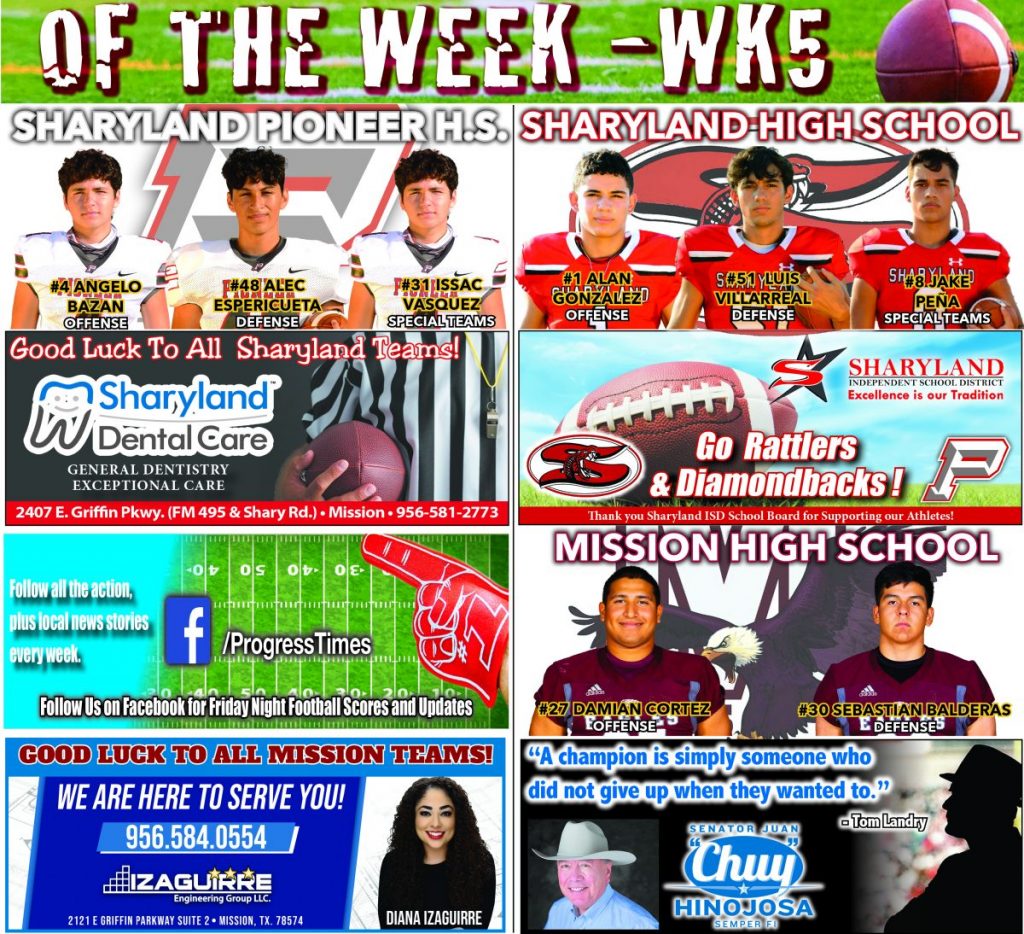