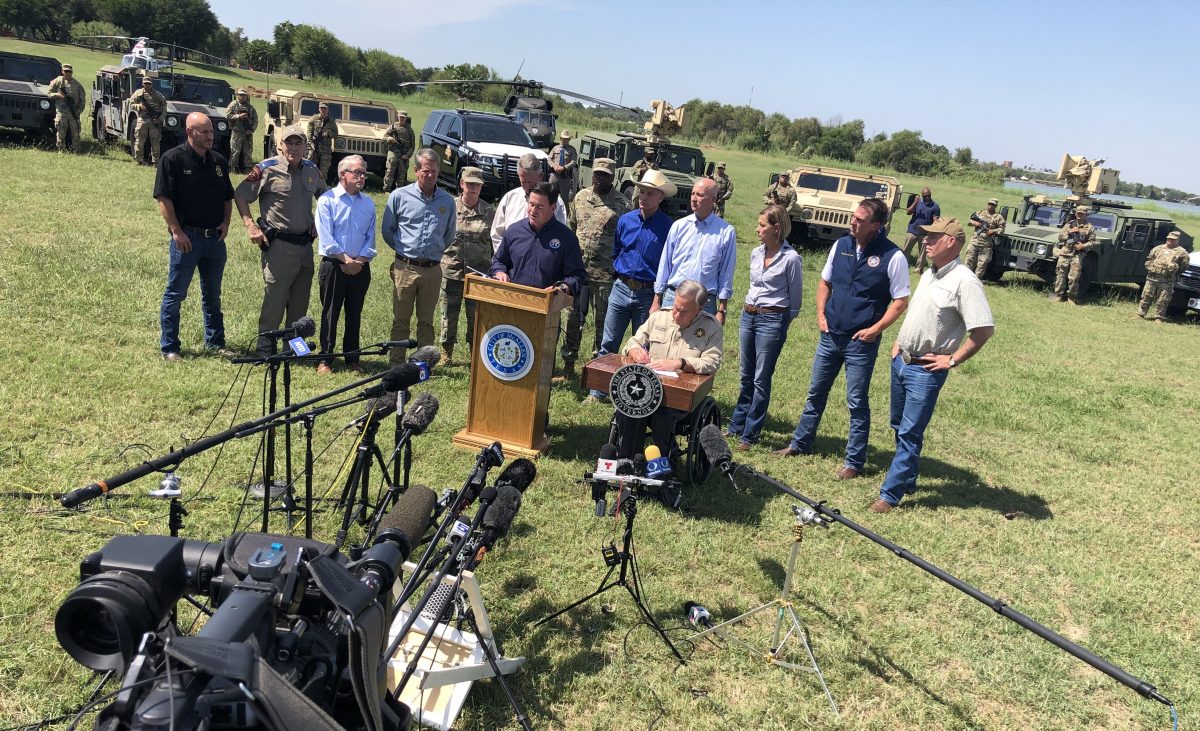 Arizona Gov. Doug Ducey, at the podium, and other Republican governors joined Texas Gov. Greg Abbott on Wednesday to discuss what they called a “crisis” at the border. (Dave Hendricks / The Progress Times)

Texas Gov. Greg Abbott blamed President Joe Biden for creating a “crisis on the border” and touted a Republican plan to fix the problem Wednesday during a news conference near Mission.

Flanked by fellow Republican governors, Abbott warned that Texas will not wait for Washington to act.

“It’s time for the Biden administration to wake up and get on the job,” Abbott said. “And do its job to protect the sovereignty and safety of the United States of America.”

Arizona Gov. Doug Ducey, Ohio Gov. Mine DeWine, Iowa Gov. Kim Reynolds and others joined Abbott for the news conference, which they held in the floodway north of Anzalduas Park.

The governors stood in front of four helicopters, 11 Humvees and two large military trucks, which blocked the view of the Rio Grande behind them.

Brandon Judd — the president of the National Border Patrol Council, the union that represents Border Patrol agents — joined the governors.

“Criminal cartels listen to action. They don’t care about words,” Judd said. “And the actions of the Biden administration are very clear: Cross the border illegally and you will be rewarded.”

Border Patrol agents in the Rio Grande Valley Sector apprehended more than 80,000 migrants per month in July and August, according to data published by U.S. Customs and Border Protection. 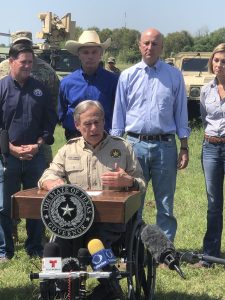 Texas Gov. Greg Abbott held a news conference Wednesday about what he called a “crisis” on the border. (Dave Hendricks / The Progress Times)

The U.S. Department of Homeland Security returned thousands to Mexico under Title 42 of the Public Health Service Act, which allows the federal government to block people from entering the country during a public health emergency.

The number of migrants released to Catholic Charities dropped in September. The national spotlight moved to Del Rio, where thousands of Haitian migrants had crossed the border

“And it’s not just the people that are crossing the border,” said Ducey, the governor of Arizona. “It’s the lethal drugs.”

Arizona is especially concerned about fentanyl, a synthetic opioid, Ducey said. In Pima County, Arizona, fentanyl replaced car crashes as the leading cause of death among people 19 years old and younger.

“There are three people to blame for making America a more dangerous place: President Joe Biden, Vice President Kamala Harris and Secretary Alejandro Mayorkas,” Ducey said, referring to the secretary of Homeland Security. “It’s no secret anymore. They have created this crisis. And Americans know it.”

To address what Abbott called the “crisis on the border,” they touted a plan backed by Republican governors in 26 states.

The 10-point plan included bringing back the Migrant Protection Protocols, which forced migrants who request asylum to stay in Mexico and created refugee camps in Tamaulipas; completing the border wall, which the Biden administration halted; providing Customs and Border Protection with more resources; and deporting all “criminally convicted illegal aliens.”

After the news conference, the governors took a few questions and left Anzalduas Park. A convoy of black cars sped east on Farm-to-Market Road 494 toward Granjeno.

Noel Santellana, 63, who had crossed the road to check his mail, paused to let the convoy pass.

Santellana and his neighbors live in a quiet area near the Anzalduas bridge, less than a mile from the Rio Grande.

While he occasionally runs across migrants, Santellana said they don’t cause any problems. He calls Border Patrol, which picks them up.

Santellana said he disagreed with Abbott’s description of a “crisis” on the border.