Ricardo “Richard” Molina, 43, of Edinburg remains under indictment on charges of engaging in organized election fraud and illegal voting. Molina, though, wants the District Attorney’s Office kicked off the case because Rodriguez is related to the mayor’s political opponents.

That would flip the script — and force Rodriguez to play defense.

“The allegations, some of them are very serious,” state District Judge Carlos Valdez said during a hearing Thursday morning at the Hidalgo County Courthouse.

Rodriguez is related to the Palacios family of Edinburg, which is a major player in local politics.

“On top of all of that,” according to a motion filed by Molina’s attorney, “the complaint on which the investigation is based was filed by Mary Alice Palacios.” 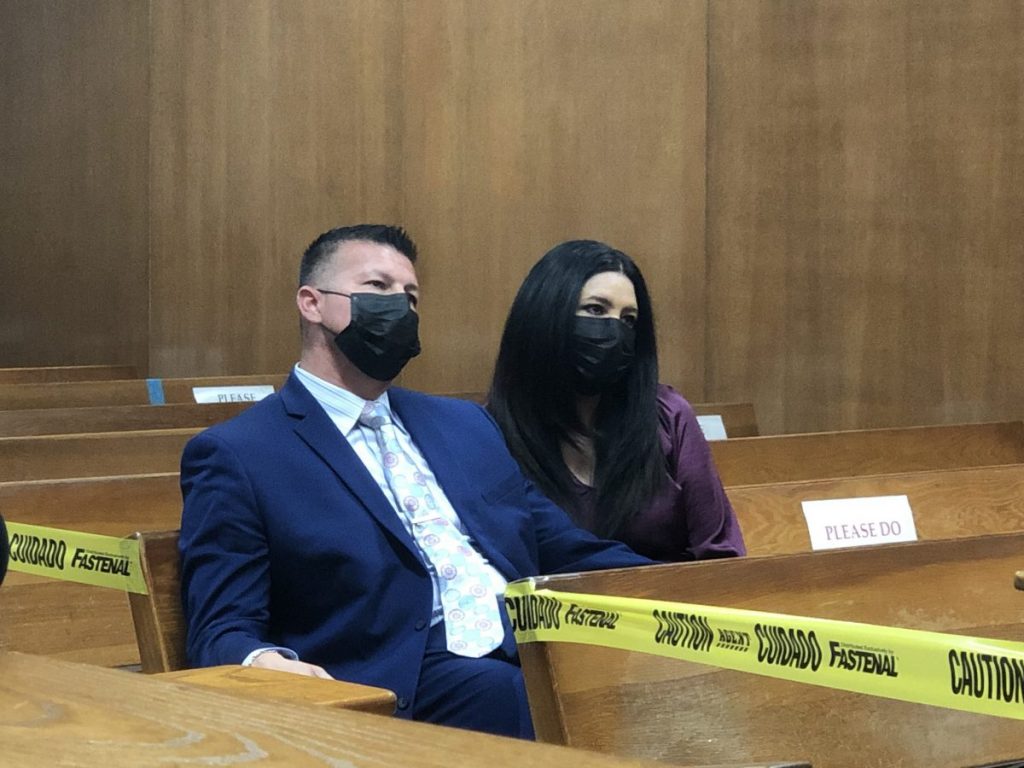 Edinburg Mayor Richard Molina and his wife, Dalia, sat in the gallery Thursday morning at the Hidalgo County Courthouse. (Photo by Dave Hendricks / The Progress Times.)

“It’s an ad hominem attack on the District Attorney’s Office that has no place or no relevance in this case,” Garza said.

“From the very start, you have told me that it’s the District Attorney’s Office,” Valdez said. “And the attorney general is not involved other than sitting with you.”

Complaints about voter fraud are filed with the Texas Secretary of State’s Office, which refers them to the Texas Attorney General’s Office for review.

“They often contact the local district attorney where the case is at,” Garza said. “And they say: ‘Would you like to assist us in this prosecution? Or we can come and present the case to your grand jury.’”

“It just so happens that I’m going to try the case, judge. I think we’re looking at a matter of semantics,” Garza said. “Whether somebody sits first chair or second chair doesn’t really determine who’s actually prosecuting.”

Valdez said he considered the issue more than semantics.

Valdez had scheduled the hearing Thursday because the District Attorney’s Office requested a trial date.

Attorney Carlos A. Garcia of Mission, who represents Molina, questioned the timing of the request.

“I think it’s rather telling that it’s filed the week before early voting, when the mayor of Edinburg is set in an election — a contested election — with two other opponents,” Garcia said.

If the election results in a runoff, Molina could be placed in the difficult position of running for re-election while he’s on trial.

“The true interest from the District Attorney’s Office is to undermine the voters of Edinburg, who have properly elected this man to be mayor,” Garcia said. “They’re on the cusp of properly electing him to be mayor once again. And so we ask the court to set this case sometime in the spring.”

Garza said the District Attorney’s Office filed the motion based on a decision by the Hidalgo County Board of Judges about when jury trials could resume.

Molina decided to run for re-election while under indictment, Garza said.

“And now he’s complaining when we ask to give him his day in court,” Garza said. “Which, he has publicly stated, that’s all he wanted.”

Garza said the District Attorney’s Office believes society has an interest in resolving the case as quickly as possible because of Molina’s position.

That argument clearly irked Garcia, who demanded to know if the District Attorney’s Office had filed similar motions in murder and sexual assault cases.

“How many of those societal interests is the district attorney looking at?” Garcia said. “I’d venture to say it’s none.”

“None of them are running for office, judge,” Garza shot back.

Garcia also questioned the argument that Molina’s position made the case a priority.

Valdez scheduled a hearing on the motion to disqualify the District Attorney’s Office for Nov. 15. After the hearing, Valdez said he would make a decision on the trial date.

“All I have to say is what I have been saying since day one,” Rodriguez said. “Just like he wants his day in court, we want our day in court too, so the truth can come out.”