The tight race for the District 16-5A Div. II football title could open up a bit tonight. The gap between the top teams could also get tighter than it currently is. That all depends on the outcome of a couple of games.

The key game involves Mission Veterans, the current league leader at 5-0 (5-2 overall) and Mercedes, sitting one game back at 5-1 (7-1 overall).The two meet tonight at Tiger Stadium in Mercedes at 7:30 pm.

A Patriots win would keep them on top of the standings and, depending on the outcome of Sharyland’s game against PSJA Memorial, they could wake up tomorrow with a two game lead with just two weeks left in the 2021 regular season. The Rattlers are 4-1 (5-2 overall) in district play and if the Patriots win tonight, they will need a win to stay one game back. A Tigers victory paired with a Rattlers win would leave all three teams with one district loss each.

Each scenario keeps the Patriots in the mix for a district title, something that may have seemed like a longshot when district play opened in September. Coming off a 1-5 2020 season, Vets was 0-2 in non-district play to start 2021 with losses to Mission High and San Benito. 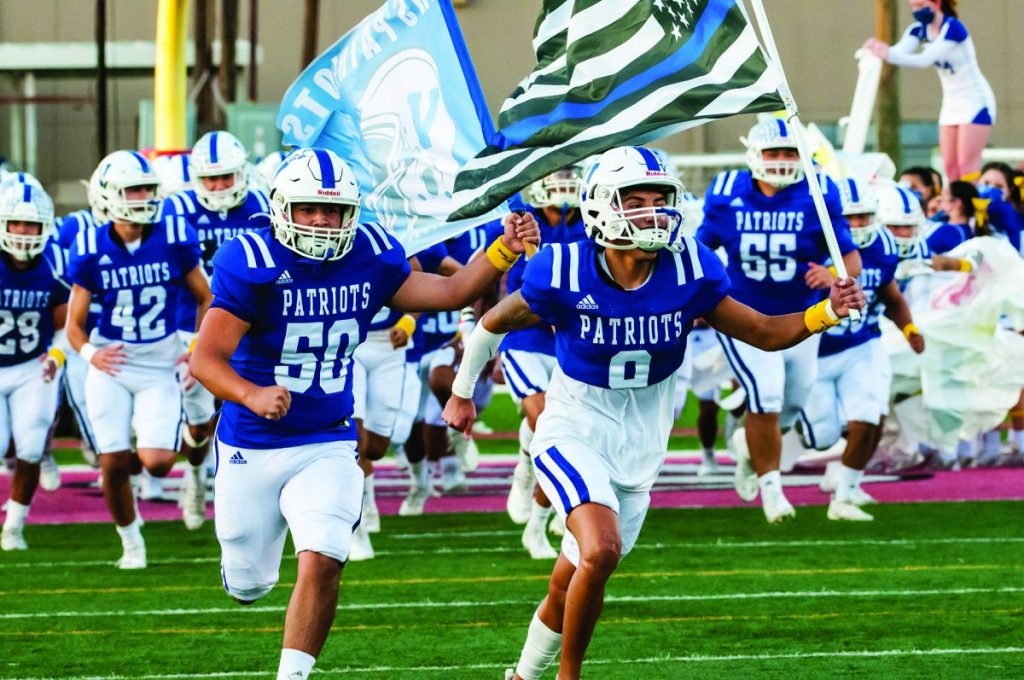 “We lost to two really good football teams,” said Patriots head coach David Gilpin. Playing a tough non-district schedule has been a trademark of Gilpin’s tenure at Vets. “We’re going to test ourselves in non-district and sometimes it leads to some bad losses or some games that we don’t play as well as we like or we get beat by a team that’s just a really, really good team.”

Gilpin went on to say how the 0-2 start did nothing to hinder the team’s goals of getting a district title, making the playoffs or going on a long postseason run. It did, however, influence what has transpired since. “The fact that we played those two tough teams had a huge impact,” said Gilpin. “We were prepared (for the district opener) because of who we had played.”

Gilpin said the team basically hit the reset button on the season after the two losses and set a goal to be 5-0 in district play before the team’s open week. “That was the plan. That was what we talked about. We said, “This is what is possible.”

That possibility became reality and the five straight wins, the biggest of which was a 27-14 conquest of Sharyland High three weeks ago, set up tonight’s match-up. The Patriots were off last week while Mercedes trounced PSJA Southwest 63-0, bouncing back from a 28-21 loss to Sharyland two weeks ago that, so far, is the only blemish on the fine season that they are having.

The two teams didn’t see each other last year after the district switched to zone play to deal with the COVID shortened 2020 season. The wait might be worth it.

“It’s going to be a tough one,” said Gilpin, when asked about tonight’s game. “They (Mercedes) are legit and they are for real. We’ve got our work cut out for us every minute and every second of that football game and we know that.” The Tigers have scored 40 or more points in five of their eight games so far this season.

Mercedes has to play a tough team as well. The Patriots have outscored their opponents by 143 points during their current winning streak, getting the job done with outstanding play in all phases of the game. 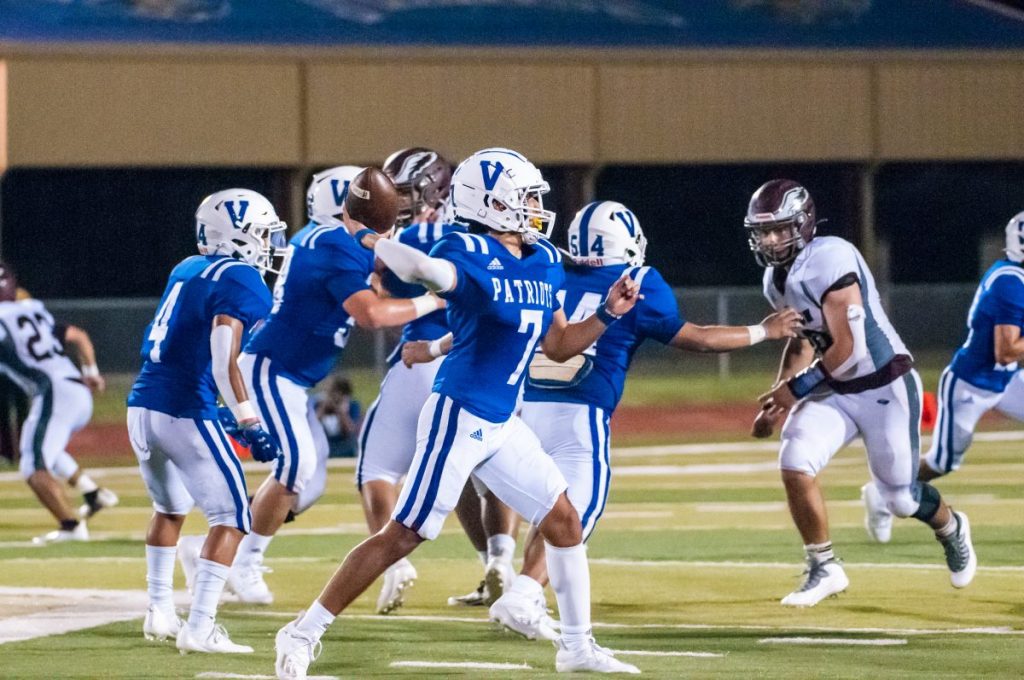 With first place on the line, the 5-0 (5-2 overall) Mission Veterans Patriots will be looking to remain undefeated in district play tonight as they travel to Mercedes to take on the 5-1 (7-1 overall) Tigers. Progress Times photo by Luciano Guerra.

Gilpin said the Patriots defense has been “light’s out” in every game but the loss to San Benito. “As long as our defense continues to play at that level . . . we’re going to be in every football game.”

The defense, according to Gilpin, has solid playmakers at each position with the added luxury of depth to go with it on both the line and in the secondary. The unit has recorded three touchdowns off of turnovers as well as a punt return for a score during their current five game winning streak.

Senior defensive lineman Mark Champion came up with several big plays in the win over Sharyland three weeks ago, basically sealing the win with a pick six in the fourth quarter. Junior Eduardo Ordaz had a 93 yard interception return for a score last week. Junior Luis De Hoyos is the team’s leading tackler from his linebacker position.

“They (the defense) have been what we knew they we’re going to be,” said Gilpin, referring to his own comment earlier in the year that this year’s defensive unit could be the best one he has had in his 13 years at the helm.

Offensively the Patriots are still an up tempo team that likes to throw, but with the loss of the team’s top four receivers from last season, the team has not been shy about running the ball this year as well. “That’s not something we have always hung our hat on,” said Gilpin. Senior Allen Vasquez, the team’s leading rusher, posted over 100 yards on the ground in the team’s big win over Sharyland.

“Our offense has really been pretty consistent over the last five weeks,” said Gilpin, adding that a big part of the team’s turnaround has revolved around protecting the football. Personnel wise, the offense, according to Gilpin, ”Has enough playmakers out there that we’re going to get ours.” The big playmaker has been quarterback Ricky Reyna. The senior threw for three scores and ran for three more in a 48-14 win over PSJA Southwest the last time the Patriots were on the field. Classmate Dylan Velasquez leads the team in receptions and receiving yards.

Gilpin also commented on how players on both sides of the ball have stepped in when needed to cover for an injured teammate. “It’s been a tough year, injury wise and trying to keep our players on the field, but the ability to take the “Next man up” mentality . . . the ability to take that and believe in that and continue to have success has been just really outstanding for our bunch this year.”