Don’t look now folks but there are just two weeks left in the 2021 Valley high school football season. How time flies when you’re having fun, huh? And while the 2021 season has been more fun for the players, coaches and fans of some Big 7 teams than it has for others, the fact that we could possibly get through the entire season with only one game being cancelled due to COVID-19 concerns, is something that we should all be thankful for.

So where do the seven teams from the Mission, La Joya and Sharyland ISDs, the Big 7, stand in regards to the district standing and the clinching of district championships and/or playoff berths with only two weeks to go? That is what we’ll be sorting out here. We’ll also be taking a look at when and where and against whom the contending teams will be playing their final two games as they look to clinch either a district title or one of the four highly sought after playoff spots in each district.

Of the four 5A Big 7 teams, all but one have earned the right to be in playoff contention. At 2-5 the Palmview Lobos find themselves tied for sixth place in the district. With only two games remaining on their schedule, the best they could do is to finish with a 4-5 District 16-5A Division I record. That would not be good enough to break into the top four, so the Lobos have already been mathematically eliminated from playoff contention. 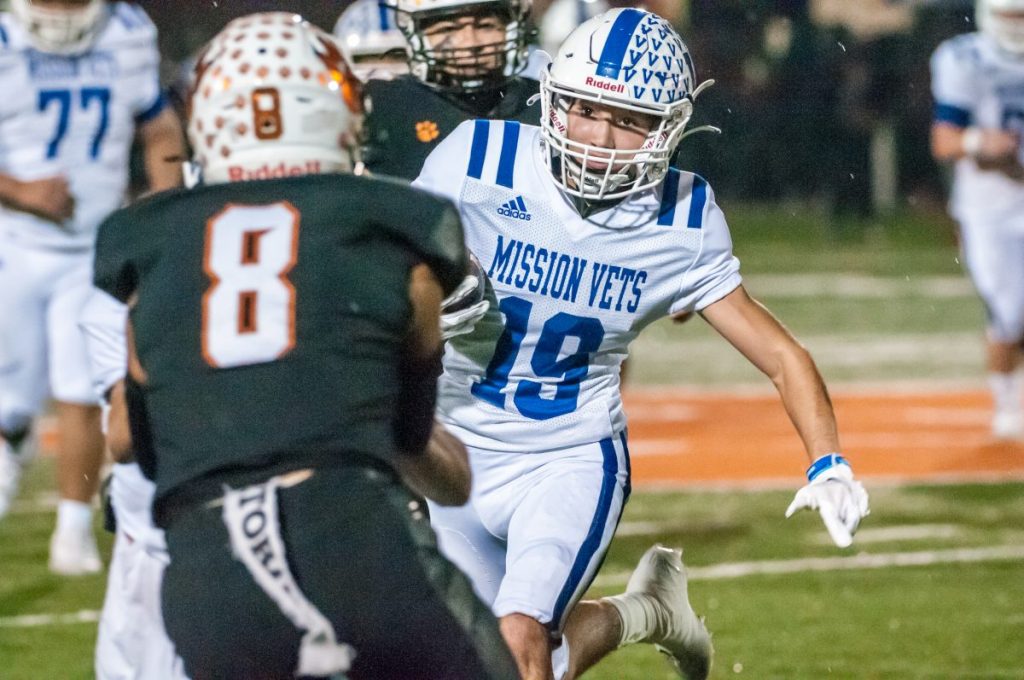 The play of Mission Veterans’ senior wide receiver Dylan Velasquez is one of the reasons the Patriots are vying for at least a share of the District 16-5A Division II title with only two weeks remaining in district play. Progress Times photo by Luciano Guerra.

As for the other three Big 7 5A teams, they are doing much better. As of this writing, the Sharyland Rattlers and the Mission Veterans Patriots find themselves tied for second place in District 16-5A Division II with 5-1 district records and the Diamondbacks are in fourth place with a 4-2 district record. As a result, the Rattlers and the Patriots are half a game behind the Mercedes Tigers who are 6-1 and who have a bye this week. Therefore, if the Patriots and the Rattlers both win their games this week, they will make up that half game and move into a three-way tie for first with the Tigers.

Whether or not that will end up happening remains to be seen, however it is safe to say that based on their Week 10 opponents’ records, the Rattlers, who will be hosting the winless Valley View Tigers tonight, have the easier path to win No. 6 than the Patriots do. That’s because the Patriots Week 10 opponent is the Pioneer Diamondbacks, in a game that was scheduled to be played at Richard Thompson Stadium last night. 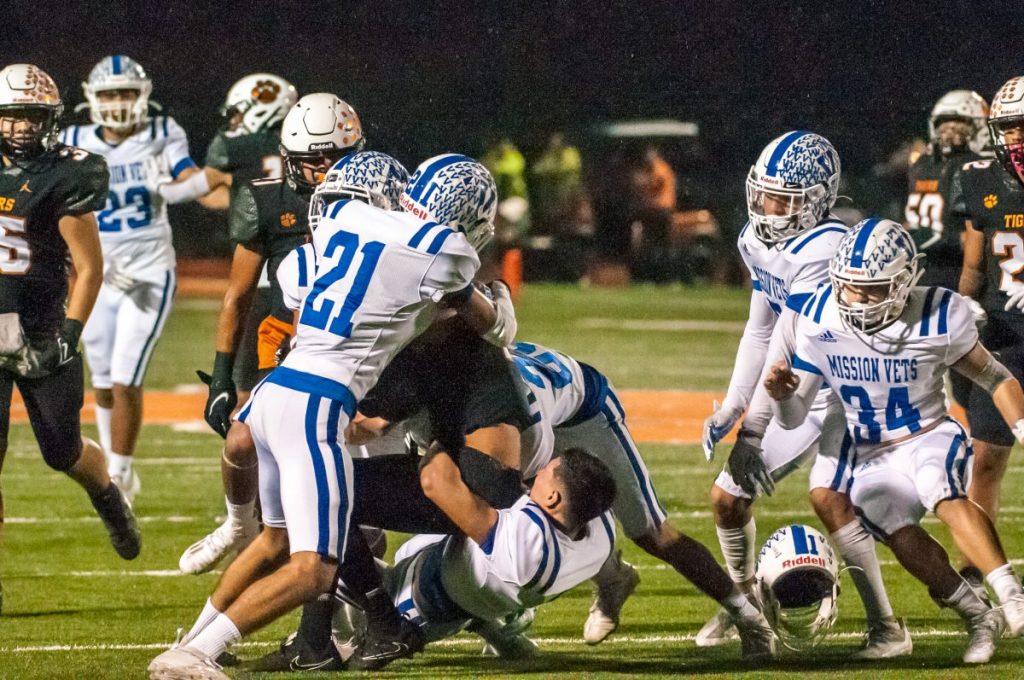 The play of the Mission Veterans’ defensive unit is one of the main reasons the Patriots are vying for at least a share of the District 16-5A Division II title with only two weeks remaining in district play. Progress Times photo by Luciano Guerra.

If you’re wondering what the likelihood is of the Rattlers, the Patriots and the Diamondbacks all making the playoffs that is hard to say at this time. It’s looking very good for the Rattlers and the Patriots to clinch a playoff berth even if they don’t earn a share of the district title. But the Diamondbacks could find themselves on the outside of the UIL state playoffs looking in if they don’t win their two remaining games. That’s because they have the 4-3 Edcouch Elsa Yellowjackets just half a game behind them in the standings and should the Diamondbacks go 1-1 from here on out and should the Yellowjackets win their only remaining game against Roma, Pioneer and Edcouch Elsa would both end the regular season at 5-3. In that case, the Yellowjackets, who defeated the Diamondbacks by a score of 42-21 in Week 7, would have the head-to-head tiebreaker advantage over Pioneer. And that would result in the Diamondbacks being eliminated from playoff contention.

Ok, enough with the 5A teams. What about the three Big 7 teams in District 30-6A; the La Joya Coyotes, the Juarez-Lincoln Huskies and the Mission Eagles? The bad news is that two of those teams, the Coyotes and the Huskies have nothing to play for from here on out but pride and experience for next year. That’s because with just one district win between them, La Joya at 1-5 and Juarez-Lincoln at 0-6, they’ve both already been eliminated from playoff contention.

The good news is that at 5-1, the Mission Eagles are in the thick of the 30-6A race and with their game against the 7-0 Edinburg Vela Sabercats scheduled to be played last night, it is possible that Mission could currently be tied with Vela for first place. Even if the Eagles lost to Vela last night, a win against the 5-1 PSJA North Raiders in Week 11 will clinch a playoff berth for Mission. 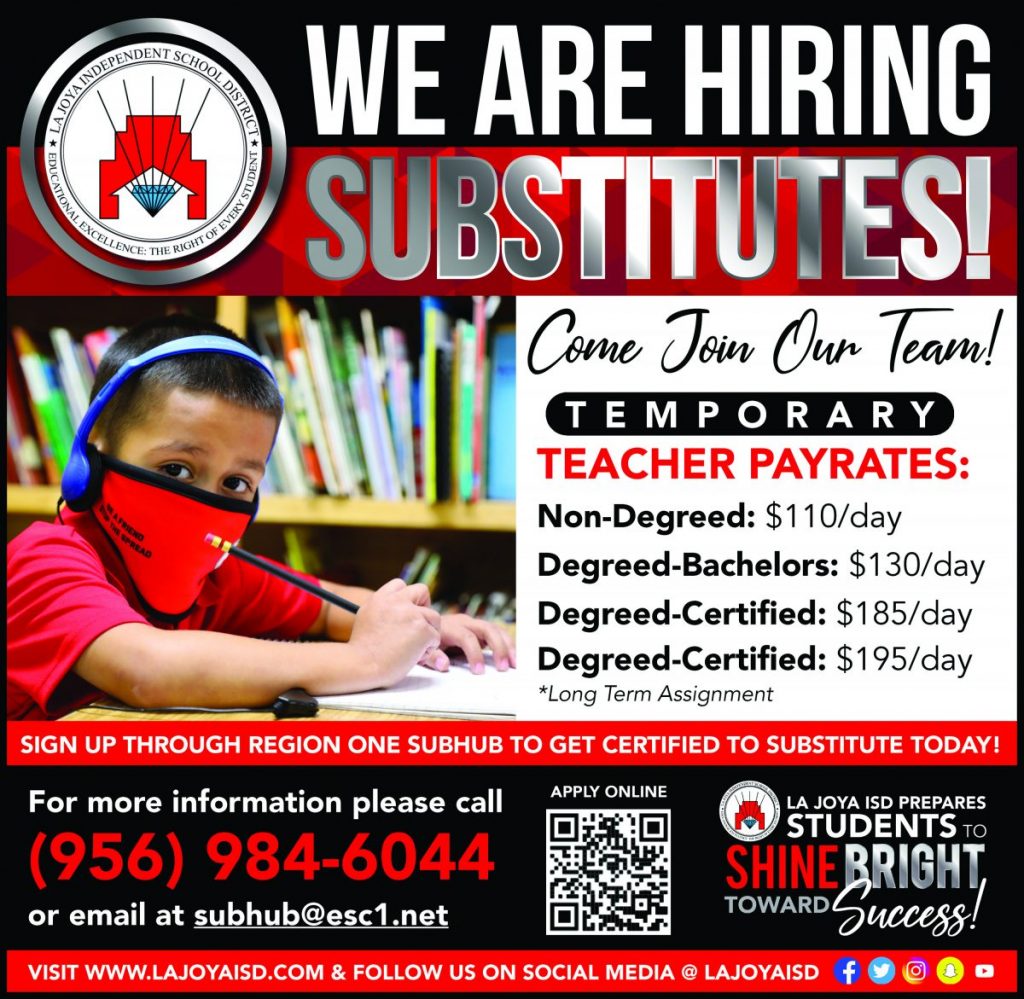 What about the worst case scenario of back-to-back losses for the Eagles in Weeks 10 and 11? That would make their district record 5-3 and while that would leave the door open for the 3-3 PSJA Bears to tie them, should they win-out, the fact that the Eagles defeated the Bears by a score of 42-41 in Week 6, gives Mission the head-to-head tie breaker advantage over the Bears.

Does this mean that the Eagles have already clinched a playoff berth? Not necessarily. That’s because there is still the possibility of a three-way tie between the Eagles, the Bears and either the Raiders or the currently 4-3 Edinburg Bobcats. If that turns out to be the case, two of those teams will be in and one will be out. How that is determined is not something that we have the time or space to get into here, even if this sports writer knew the answer (which he doesn’t). Let’s just hope that the Eagles avoid that possibility by winning at least one of their last two games. Or better yet, that they win out and claim a share of the district championship as they did in 2019 when they finished the season tied atop the standings with PSJA and McAllen Memorial at 6-1.

Should that occur, we could be looking at three of the Big 7 teams, Mission, Mission Vets and Sharyland, claiming at least a share of their respective district titles!