“Because we did leave our jurisdiction and there was an injury, we have to be careful how we review it,” said City Attorney Gus Martinez. “And be very thorough.”

“He’s going to assist in the investigation of that,” Martinez said. “As it relates to policies and procedures.” 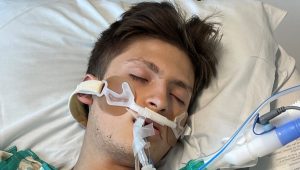 Monjaras noticed the Durango had a defective light over the rear license plate, according to Mission Municipal Court records. When he attempted to pull over the Durango, the driver of the Impala tried to distract him.

When that didn’t work, the Impala drove between them and the Durango sped away. At one point, the Durango reached 100 mph.

Monjaras and other police officers chased the Durango all the way to San Juan, where the driver struck a silver BMW near the intersection of Business 83 and Nebraska Avenue.

The crash knocked the driver of the BMW — 19-year-old Enrique Rodriguez — unconscious.

Officers found the Durango empty. The driver had fled on foot.

The San Juan Police Department called Enrique’s mother, Citlalli Rodriguez, who rushed to the scene. Enrique was still in the car when she arrived.

“At that moment, I completely lost my mind,” Citlalli Rodriguez said.

Enrique had graduated from high school in May 2020 and planned to study nursing at the University of Texas Rio Grande Valley. He drove for DoorDash, a food delivery service.

“He was starting to barely get his feet wet into the adult world,” Citlalli Rodriguez said.

Doctors told Citlalli Rodriguez that Enrique had suffered a traumatic brain injury. He was placed in a medically induced coma, underwent surgery and spent more than a month in the hospital.

After the crash, she met with Mission police Chief Robert Dominguez and an investigator.

“They’ve been wonderful, you know,” Citlalli Rodriguez said, adding that officers checked in with her periodically and provided updates on the investigation.

Samuel Martinez Jr., the driver of the Durango, escaped to Mexico with assistance from his girlfriend, Valeria Moreno, 19, of Weslaco, according to court records. She’s charged with hindering the apprehension or prosecution of a felon.

While she wants officers to arrest the man who injured her son, Citlalli Rodriguez said that she’s also concerned about the chase itself.

“I just don’t understand why Mission PD would chase someone, like I said, 14 miles over a light,” Citlalli Rodriguez said.

The review may help Mission answer that question.

“The majority of pursuits are just that: young kids that don’t have any regard for law enforcement,” Dominguez said. “Or anyone else, for that matter.”

Dominguez said the review will examine the actions of seven patrol officers and three supervisors. Depending on what the review finds, they may face disciplinary action.

Enrique, meanwhile, was released from the hospital on Oct. 23.

As a result of the crash, Enrique suffered brain damage and lost the ability to speak, Citlalli Rodriguez said. Enrique responds to questions with a thumbs-up, a thumbs-down or by shrugging his shoulders. He’s now in therapy.

“It’s really a miracle,” Citlalli Rodriguez said. “To us, it’s a miracle that he’s alive now.”