Pablo Talavera Jr., 33, of Pharr is accused of assisting a drug trafficking organization headed by his father.

“Based upon his arrest by the Federal Bureau of Investigation, Texas Department of Public Safety (DPS) Trooper Pablo Talavera Jr. will be suspended from duty,” according to a statement released by Lt. Christopher Olivarez, a spokesman for the department. “DPS’ Office of Inspector General will conduct an administrative investigation to allow the department to determine his future employment status.”

Talavera Jr. worked at the East Hidalgo Detention Center, a privately owned jail that holds inmates for the U.S. Marshals Service, from October 2013 to December 2014, according to Texas Commission on Law Enforcement records.

He left La Villa to attend the Department of Public Safety academy in Austin. After graduation, Talavera Jr. became a state trooper in June 2015. 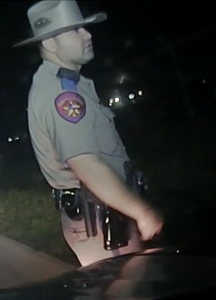 State Trooper Pablo Talavera Jr., 33, of Pharr in a screenshot from a dashboard camera video. (Image courtesy of the Texas Department of Public Safety.)

A thank-you letter that Talavera Jr. received was featured in the Sept. 18, 2015, issue of DPS News, a newsletter for Department of Public Safety employees.

“I would like to commend Trooper Lamp and Probationary Trooper Pablo Talavera who provided roadside assistance and safety after I had a blowout on the causeway at Portland, Texas,” wrote the motorist. “I told the officers that I didn’t have a spare tire, I’m not a member of AAA, and my husband was in the valley. Probationary Trooper Talavera obtained my tire information as Trooper Lamp was contacting a towing company in Portland and made arrangements to have me towed into Portland for a new tire. They were very thorough, ensured my safety, and provided assistance prior to leaving. What could have been a harrowing experience turned out to be just a minor inconvenience.”

Both his father, Pablo Talavera Sr., and his uncle, Elias Talavera, were part of a drug trafficking organization that smuggled methamphetamine, cocaine and heroin from Texas to Tennessee, according to an indictment filed in the Western District of Tennessee.

They hid the drugs in welding tanks with false bottoms, according to Pharr police Inv. Alejandro Alvarez, who testified during a hearing in August.

“In the course of the investigation, FBI agents learned that Talavera, Sr. made representations that he had family members, both in corrections and with probation, that could assist him with obtaining information for the benefit of the Talavera DTO,” according to a criminal complaint filed in McAllen. “Talavera Sr. also claimed to have an attorney friend who could get Talavera Sr. any information on any case for a fee of several thousand dollars.”

An informant claimed that Talavera Jr. “utilized his position as a Texas DPS State Trooper to obtain and provide law enforcement sensitive information and escort money (bulk cash) and/or narcotic loads for the Talavera DTO,” according to the criminal complaint.

The FBI sent an informant to meet with Talavera Sr.

During the meeting, the informant told Talavera Sr. that state troopers had impounded a car in Live Oak County that contained cash, according to the criminal complaint. The informant provided Talavera Sr. with the car’s license plate number.

Less than two weeks later, Talavera Sr. provided the informant with the vehicle registration information. The Department of Public Safety determined that someone with access to Talavera Jr.’s account had run the license plate through law enforcement databases.

To confirm their suspicions, agents had a cooperating defendant call Talavera Jr., according to the criminal complaint. During the phone call, Talavera Jr. admitted to conducting the license plate search.

The cooperating defendant claimed that Talavera Jr. had known about his father’s illegal business for years.

“Talavera Jr. also told investigators during a 2019 interview that he was aware that the Talavera family in Mexico was involved in Organized Crime,” according to the criminal complaint.

Talavera Jr. is charged with conspiracy to possess with intent to distribute a controlled substance.