Omar X. Romero, 38, of McAllen bribed at least one member of the Agua Special Utility District board in 2018, when he sold the utility district a water tank, said Assistant U.S. Attorney Roberto “Bobby” Lopez Jr., who read the factual basis for the plea aloud Wednesday afternoon during a hearing at the federal courthouse. Romero also fraudulently took $50,000 from Hidalgo County EMS in 2020, when the cash-strapped company was in the middle of bankruptcy proceedings.

Wearing a black suit and a blue surgical mask, Romero pleaded guilty to bankruptcy fraud and violating the federal Travel Act by using a phone during the bribery scheme.

Romero and his attorney, Thomas J. McHugh of San Antonio, couldn’t be reached for comment after the hearing Wednesday afternoon.

The case against Romero is part of a wide-ranging federal investigation that targeted public corruption in western Hidalgo County. 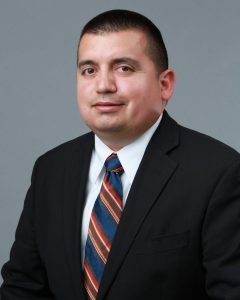 The subpoenas requested information on mayors, judges, school board trustees, city managers and other public officials.

Romero negotiated a plea agreement, waived indictment and pleaded guilty to a type of charging document called a “criminal information,” which is frequently used when a person is cooperating with prosecutors.

“That tells me that they’ve worked out something,” said attorney Rick Salinas of Mission. “That the accused has agreed to be honest and truthful.”

During federal investigations, people who plead guilty and cooperate with prosecutors may receive shorter prison sentences — or avoid prison altogether.

“And in a situation like this, where there are so many moving parts and so many players, it would be stupid not to come forward,” Salinas said. “If you’re going to wait for the tide to get bigger, you’re going to get swept away.”

In January 2018, when ST Infrastructure Group sold Agua SUD the second water tank, Romero bribed at least one member of the utility board.

Romero believed that part of the $42,500 he paid to “Individual A” would be provided to other members of the utility board.

Lopez didn’t identify “Board Member A” or “Individual A” by name.

Agua SUD, however, ended up paying about $245,000, according to a check register Agua SUD released under the Public Information Act.

Romero pleaded guilty to violating the federal Travel Act by using a phone to further the bribery scheme.

In 2019, when Hidalgo County EMS filed for Chapter 11 bankruptcy, Romero offered to help.

During the bankruptcy, however, Romero took $50,000 from the struggling company.

After he pleaded guilty on Wednesday afternoon, Romero appeared before U.S. Magistrate Judge Juan F. Alanis for a detention hearing.

Alanis set bond at $50,000 with no cash deposit or surety required.

Sentencing is scheduled for Jan. 20, 2022. Romero faces a maximum of five years in federal prison.

As part of the plea agreement, prosecutors agreed to recommend that Romero serve his sentences concurrently.