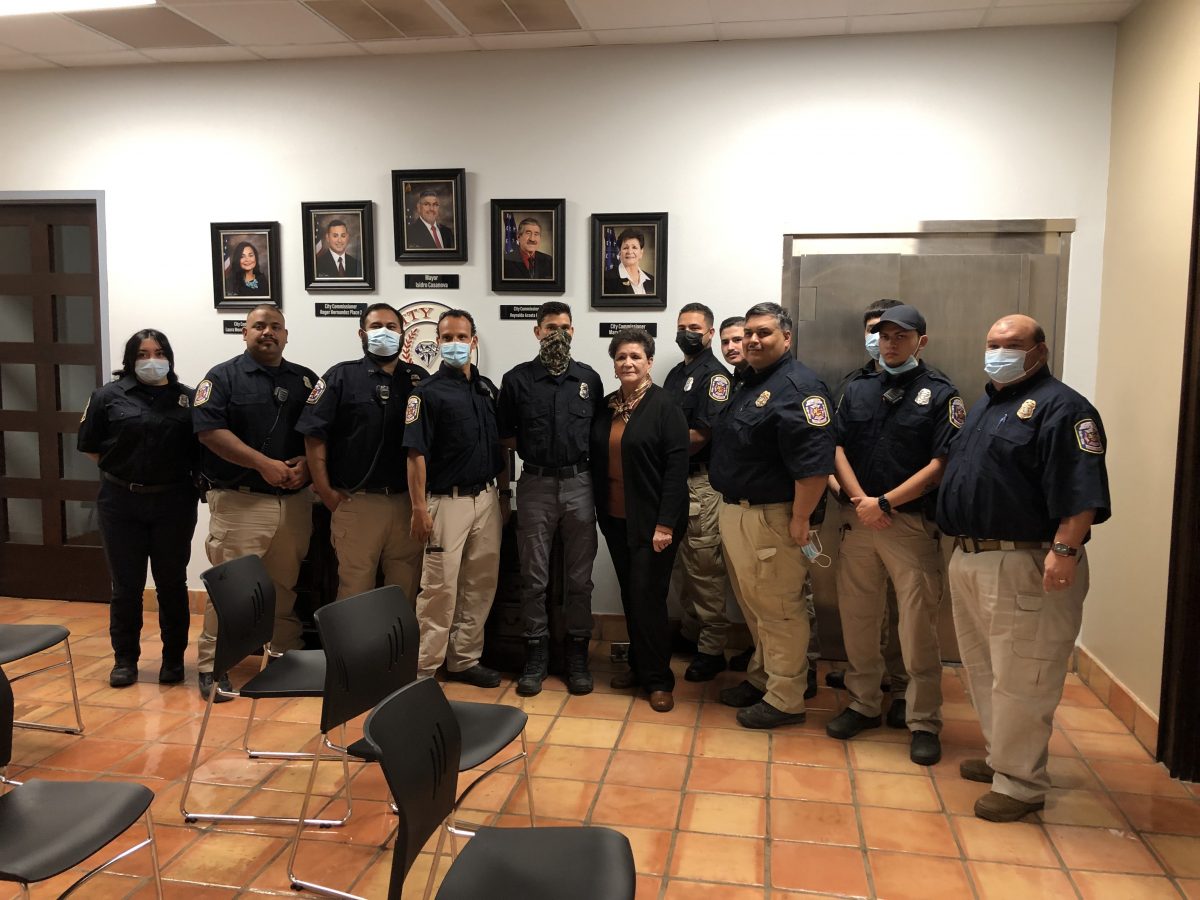 Mary Salinas, center, poses for a photo with members of the La Joya Volunteer Fire Department after the City Council meeting on Tuesday, Nov. 9, 2021. (Photo by Dave Hendricks / The Progress Times.)

The City Council thanked Mary Salinas and Acosta — who didn’t run for re-election — with a resolution that praised their “dedication, enthusiasm and outstanding public service.”

“She did an amazing job,” said City Councilman Roger Hernandez, who added that Mary Salinas moved La Joya forward. “And I know a lot of people, a lot of citizens, respect her.”

Maria A. “Mary” Salinas, 79, a retired nurse, spent 14 years on the City Council and served alongside three mayors.

“Everything comes to an end, I guess,” said Mayor Isidro Casanova. “It was a pleasure working with her.”

Voters elected Mary Salinas in 2007, when La Joya had a Board of Aldermen and Mayor Billy Leo dominated local politics.

She ran for re-election with Casanova and Roberto Jackson in 2008. They won by comfortable margins, defeating three candidates aligned with Leo.

“I still have some of those signs there at my house,” said Jackson, who later became the city attorney.

Her husband, Jose A. “Fito” Salinas, defeated Leo in 2010. While his victory made headlines, many in western Hidalgo County considered Mary Salinas the more formidable politician.

“She was a people-person. Very amicable. She was very friendly. And she helped out a lot of people in the community,” Jackson said. “They reciprocated, and they supported her.”

Jackson and Casanova, though, eventually split with the Salinas family.

“Politics will always be politics and that’s just nature — the way it is,” said Casanova, who ran against Fito Salinas in 2015 and 2019, when he became the mayor.

The resolution commended Acosta and Mary Salinas for their commitment to La Joya.

“Councilman Reynaldo Acosta and Councilwoman Mary Salinas have brought respect, honor, and integrity to the City of La Joya by leading by example, exhibiting the highest level of ethics and maintaining a superior moral character,” according to the resolution.

The resolution didn’t mention that her husband, Fito Salinas, and their daughter, Frances Salinas, had confessed to defrauding the city and the La Joya Economic Development Corp. while Mary Salinas served on the City Council. Sentencing is scheduled for December.

Mary Salinas didn’t respond to requests for comment on Tuesday, when a Progress Times reporter approached her after the City Council meeting, and on Wednesday morning.

As part of a plea agreement, prosecutors agreed to drop a charge against Fito Salinas that accused him of selling property — a home he co-owned with Mary Salinas — to La Joya for an inflated price.

Mary Salinas knew the purchase price and signed the sale documents, which the city released under the Texas Public Information Act. She was never charged with any crime.

“I’m not even going to touch that subject,” Casanova said. “I’ll let the people that are investigating that do their job.”