Patriots in the hunt for third gold ball

Coming off a 2020 season in which they went 1-5, the 2021 Mission Veterans Patriots football team may have caught some people by surprise by winning seven of their eight District 16-5A Div. II games and claiming a share of the district title. But while there is no denying the fact that they lost all but one of their games last year, the Patriots may have very well been the best one-win team that ever took to a high school football field in the state of Texas.

Why is that? For several reasons, but the fact that 2020 was a COVID shortened season, so the Patriots did not get the opportunity of playing their usual 10 game schedule certainly played a role in it. After all, a ten game season would’ve given the Patriots four more opportunities to win another game or two, or possibly even three or four. In addition, the fact that three of the Patriots losses were against three of the top ranked teams in the Valley last year, the Mission Eagles, the Pioneer Diamondbacks and the Edinburg Vela Sabercats, and the other two were against the Sharyland Rattlers and the Edcouch Elsa Yellowjackets, perennial playoff teams, should if nothing else put their 1-5 record in a different light. 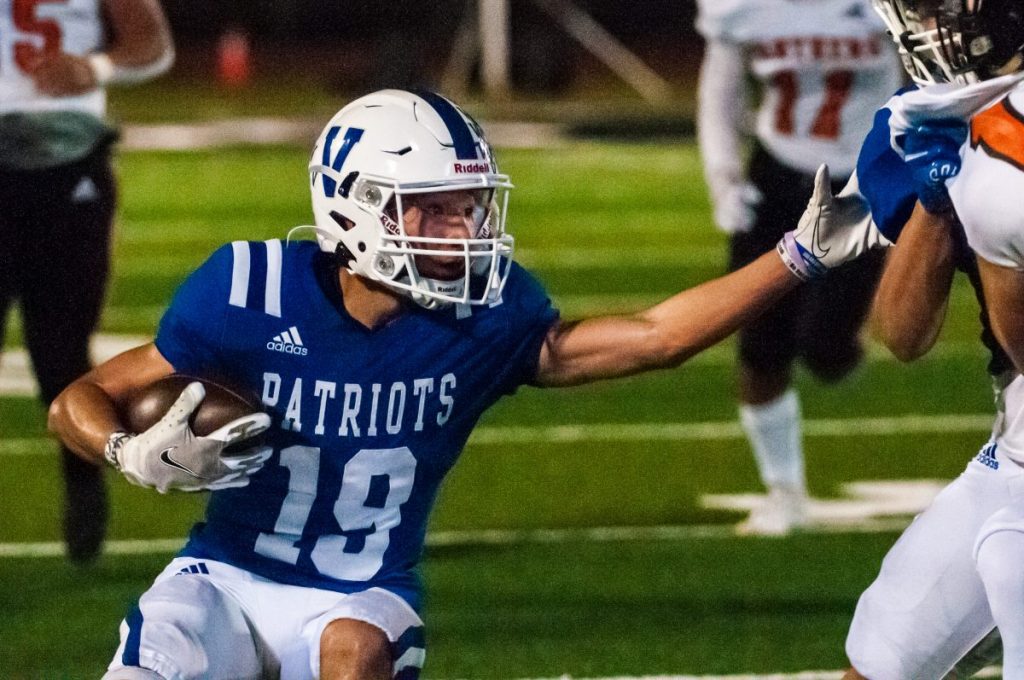 Mission Veterans’ senior wide receiver Dylan Velasquez will be looking to add to his season totals of 63 receptions and seven touchdowns against the Marble Falls Mustangs tonight. Progress Times photo by Luciano Guerra.

Regardless of what could’ve, or maybe even should’ve happened last year, Patriots head coach David Gilpin is proud of the way his boys have put last year behind them and have returned to the winning ways that are characteristic of Patriots football.

“We were not a bad football team last year,” Gilpin said. “Unfortunately, our record doesn’t look very good. But it’s not indicative of the way we played. But I’m extremely proud of the fact that we bounced back from 1-5. We didn’t let that dictate how we were going to move forward this year as we got back to a sense of normalcy and playing a full schedule. It’s been extremely rewarding as a head coach to see this staff and this group of boys come out and accomplish what we’ve done.”

“We measure our program by championships,” Gilpin said. “Wins and losses are nice. Nine and one is a great record but if you didn’t win a championship and you come in second place and then you lose in the first round of the playoffs, to me that’s not a great year. What we have come to determine in our program is that no matter what your record is, if you win a championship, if you carry the title of champion at the end of the year, then you had a great year. And we’ve got two championships already this year.”

The winning margin in last week’s game was provided by senior defensive back, punter and kicker, Rene Trujillo. His 24 yard field goal with 2:11 remaining in the third quarter gave the Patriots a 17-7 lead at the time. However, the Panthers’ subsequent fourth quarter touchdown made it a three-point game and turned Trujillo’s first and only field goal of the season into the eventual game winner.

“It was our first field goal (of the season) because when we’re inside the 20 (yard line) we usually go for it on fourth down,” Trujillo said. “But this time Coach Gilpin had trust in me and gave me a chance to go for the three-pointer.”

When asked if he was nervous as he prepared to kick his first-ever field goal that just happened to be during a playoff game, Trujillo said, “In warm-ups I was feeling good. But then when I went in to kick the field goal I started thinking about what Coach Gilpin always says about every point counting. Then I thought to myself, it’s just a regular field goal, it’s no biggie, so I kicked it and it went in.”

Even though Trujillo accounted for five of the Patriots’ 17 points with his field goal and two extra points, his most memorable play of the game may not have been as a kicker at all. That’s because he helped stop a Panthers’ drive when he intercepted a pass late in the first quarter.

“It was my third interception of the season,” Trujillo said. “I had one against Pioneer, one against PSJA Memorial and then this one. I did return this one 18 yards and that is the first time I’ve returned an interception.”

If the Patriots are going to earn their third gold ball of the season, they will have to defeat the Marble Falls Mustangs in the Area round of the playoffs tonight at 7:30 at Heroes Stadium in San Antonio. And senior wide receiver Dylan Velasquez, who scored one of the two Patriots touchdowns against Medina Valley when he caught a short pass from quarterback Ricky Reyna and proceeded to bob and weave his way for 26 yards until he reached the end zone, has a pretty good idea what it will take for him and his brothers in blue to emerge victorious tonight.

“We’ve got to do what the coaches say,” Velasquez said. “We’ve got to execute better and we’ve got to go out there with confidence and perform at our best.”

The fact that the Mustangs closed out their district schedule with three consecutive shutouts in which their offense scored a total of 199 points (76-0, 49-0 and 74-0) is a pretty good indicator of how explosive their offense can be. However against Brenham last week, the Mustangs only scored 14 points in regulation and 13 additional points during the two overtime periods it took them to defeat the Cubs by a score of 27-21.

But while the Patriots and the Mustangs were held to 17 and 14 points respectively last week, at least through four quarters, chances are that it’s going to take putting significantly more points on the scoreboard to win the game tonight. And while Trujillo and Velasquez could very well play major roles in helping the Patriots light up the scoreboard, they both depend on their offensive linemen, like junior center Jose Padilla, to make it possible for them to do their jobs.

In his second year on the varsity squad, this is Padilla’s first opportunity to participate in the playoffs. But as much as he looked forward to playing Medina Valley last week, he’s looking forward to tonight’s game even more.

“I’m always telling my guys, ‘You can’t do bad and give up what everyone else has been working for,’” Padilla said. “We as juniors should be able to step up and try to help the seniors because this is their last year, they’re gone after this. I think we lower classmen should be working harder to get them where we want to go.”