The Peñitas TIRZ hired Perez — who previously worked in McAllen, Hidalgo and Weslaco — to handle a major project that may create thousands of jobs and pay millions in property taxes.

“I think it’s a project that’s going to be very important to not just Peñitas but Hidalgo County,” Perez said. “I think that’s probably one of the reasons why they contacted me to help out.”

While the details remain under wraps, the project would be located north of U.S. 83 near the highway.

Peñitas partnered with Hidalgo County and other local governments to create the TIRZ, which is designed to spur economic development. 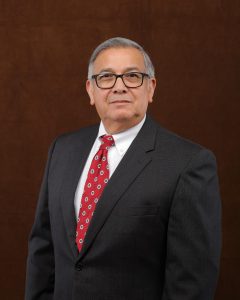 Mike Perez. (Photo courtesy of the city of Weslaco.)

All or part of the property tax paid on new construction within a TIRZ is set aside for infrastructure, which may include roads, drainage and utilities. In many cases, the landowner or developer pays for the infrastructure up front and the TIRZ provides reimbursement later.

“We’re excited to have him onboard,” said Mayor Rodrigo “Rigo” Lopez. “And we’re depending on his guidance.”

Along with experience, Perez brings a reputation for honesty and integrity to Peñitas.

The U.S. Bureau of Alcohol, Tobacco, Firearms and Explosives arrested Peñitas Chief of Staff Andres “Andy” Morales on gun charges during May.

Morales pleaded not guilty. He remains employed by the city — and a member of the Peñitas TIRZ board.

Perez is no stranger to difficult situations.

He accepted the city manager position in Hidalgo during a major political shakeup and took the top job in Weslaco after a bribery scandal.

“He’s got a good head on his shoulders,” said former Peñitas Mayor Marcos Ochoa, who serves on the TIRZ board.

Ochoa said that hiring Perez is one of the best decisions made by the Peñitas TIRZ.

Perez said the Peñitas TIRZ will pay him $5,000 per month.

The project will require cooperation with the county, Perez said. They’ll need to coordinate on drainage, roads and other services.

“The thing with the Peñitas TIRZ is the TIRZ board gets 100% of the tax reimbursement,” Perez said. “The city doesn’t get anything. So you’re going to have this huge development occurring in the city of Peñitas and, really, they’re not going to have any assistance at all from property tax to kind of help address it.”

The TIRZ and the city will need to work together, Perez said, to pay for fire protection, drainage and other services required for the project.

Perez will advise the Peñitas TIRZ on everything from the posting of meeting agendas to economic development negotiations and long-term planning.

“I’ll hopefully set the pace and set the direction on it,” Perez said. “And then they should be OK.”