This article appeared in the Nov. 19 issue of the Progress Times.

A judge on Tuesday denied Edinburg Mayor Richard Molina’s request to disqualify the Hidalgo County District Attorney’s Office from handling the voter fraud case against him.

Attorney Carlos A. Garcia of Mission, who represents Molina, argued that Hidalgo County District Attorney Ricardo Rodriguez and his family cooked up the voter fraud case against Molina when they couldn’t beat him at the polls.

“After considering the testimony of witnesses, the evidence admitted, the legal authorities submitted and the arguments of counsel, the Court is of the opinion that said motion should be denied,” Valdez ruled on Tuesday morning.

Rodriguez’s aunt, former Hidalgo County Justice of the Peace Mary Alice Palacios, filed a complaint against Molina in December 2017 — a month after he won the mayoral election. 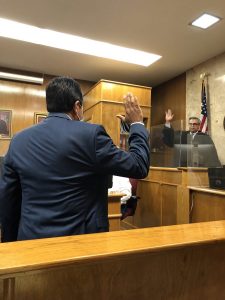 The complaint alleged that voters who didn’t live in Edinburg changed their addresses to cast ballots during the election.

In perhaps the most infamous example, the complaint alleged that 11 adults had registered to vote from a tiny house on the 400 block of East Fay Street.

“The work required to prepare the information thus far is not with the singular intent to change the results of the election,” according to the complaint, which Mary Alice Palacios sent to the Texas Secretary of State’s Office on Dec. 12, 2017, “rather, it is intended to highlight a much greater problem that will inevitably affect all future elections in Hidalgo County.”

The Secretary of State’s Office referred the complaint to the Texas Attorney General’s Office. After an investigation, Molina was arrested in April 2019.

Molina is charged with one count of engaging in organized election fraud, a first-degree felony; and 11 counts of illegal voting, a second-degree felony.

He pleaded not guilty.

The pandemic, which prevented Hidalgo County judges from holding jury trials, left the case in limbo. More than a year went by without a hearing.

The District Attorney’s Office revived the case in mid-October, when prosecutors asked the judge to set a trial date.

“Given the nature of the charges, the position of the defendant as a public servant and the length of time this case has been pending, the State also requests the court consider setting this case as soon as practicable,” according to the motion filed by the District Attorney’s Office, “as the State believes there is a societal interest in providing a speedy trial.”

The District Attorney’s Office had filed the motion Oct. 12 — just six days before early voting started in Molina’s re-election campaign. At roughly the same time, someone mailed a flier to voters that showed Molina in handcuffs and warned he could be sent to jail.

“This is a coordinated effort between the district attorney, his family and other power players within this county,” Garcia said. “Your honor, it’s no accident or mistake that you’ve been asked to come from Corpus — from another county — to come and sit in judgment. To call the balls and the strikes.”

Garcia asked the court to disqualify the District Attorney’s Office from handling the case.

“We’ve had the cooperation of the Federal Bureau of Investigation and other state agencies,” Michael J. Garza said. “And to suggest that Ricardo Rodriguez and the Palacios family controls the Attorney General, the FBI and the Texas Rangers is a ridiculous proposition.”

Valdez weighed the arguments during a daylong hearing on Monday, when Molina attempted to put the Palacios family on trial.

At one point, Garcia showed the judge a chart titled “The Power of the Palacios.” 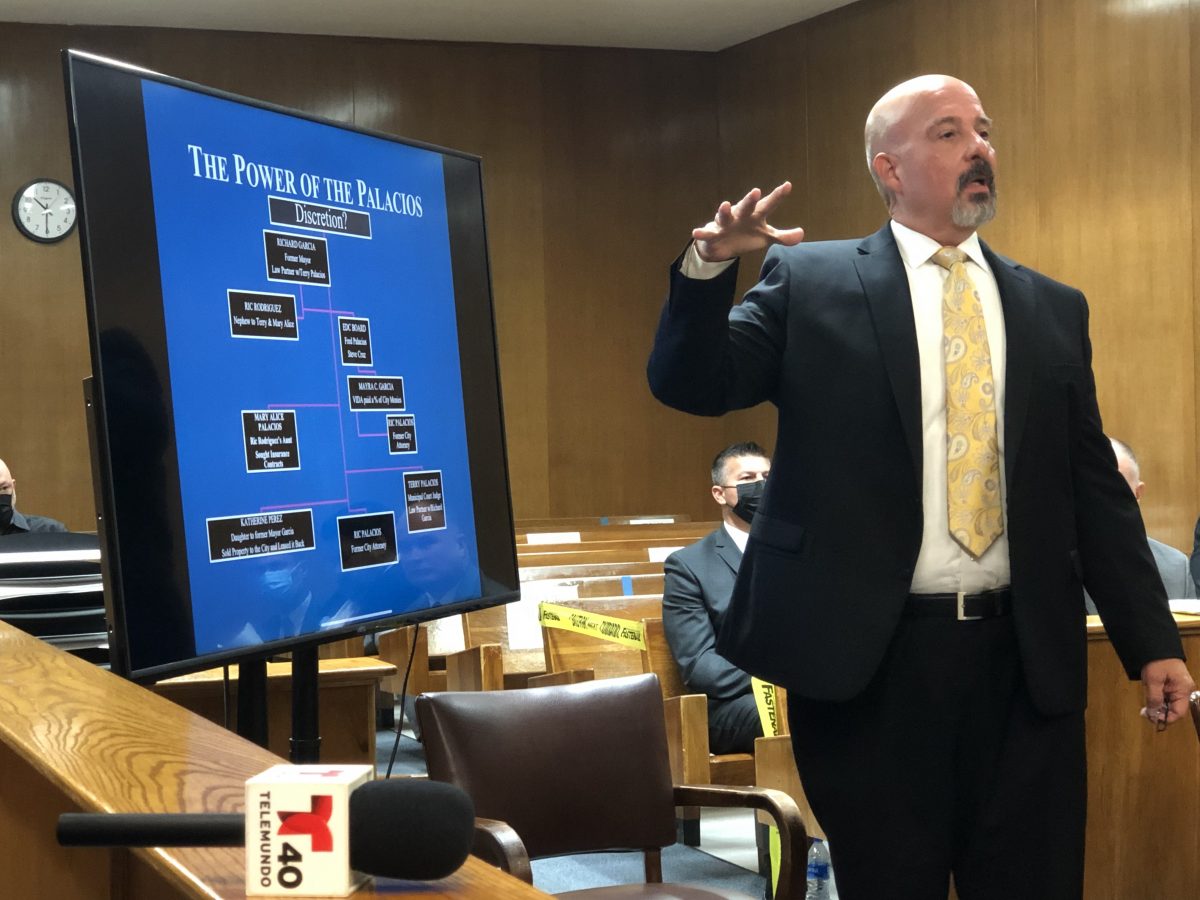 Attorney Carlos A. Garcia of Mission, who represents Edinburg Mayor Richard Molina, showed the judge a chart labeled “The Power of the Palacios” during a hearing on Nov. 15, 2021. (Photo by Dave Hendricks / The Progress Times.)

It noted that former Edinburg Mayor Richard Garcia is a partner in a law firm with Rodriguez’s uncle, Edinburg Municipal Judge Toribio “Terry” Palacios. It noted that Rodriguez’s cousin, Ricardo “Rick” Palacios, is the former city attorney. And it noted that his aunt, Mary Alice Palacios, sought insurance contracts with the city.

Garcia questioned why the District Attorney’s Office had prioritized Molina’s case for trial when Hidalgo County had nearly 1,700 people in custody.

He called Hidalgo County District Clerk Laura Hinojosa, who testified that more than 9,200 cases are pending in local district courts.

With so many people in jail and so many cases pending, Garcia argued the District Attorney’s Office had another motivation for requesting a trial date: politics.

Miguel Angel Garza, a politiquero aligned with Molina, testified about how the Palacios family views politics.

“If you don’t support the Palacios, you’re against them,” Miguel Angel Garza said. “And they attack you. That’s pretty much what it is.”

In response to questions, Miguel Angel Garza admitted the FBI had questioned him about Molina.

“About your relationship and taking money for Richard Molina on pay-to-play schemes?” Michael J. Garza asked.

Miguel Angel Garza acknowledged meeting with the FBI but denied he’d cooperated with the government.

“You like to drink?” Michael J. Garza asked. “And drive while intoxicated?”

“And you’ve done that on more than three occasions?” Michael J. Garza said. “And been arrested?”

When he finished testifying, Miguel Angel Garza was in such a hurry to leave the courtroom that he tripped over a cord and nearly fell. 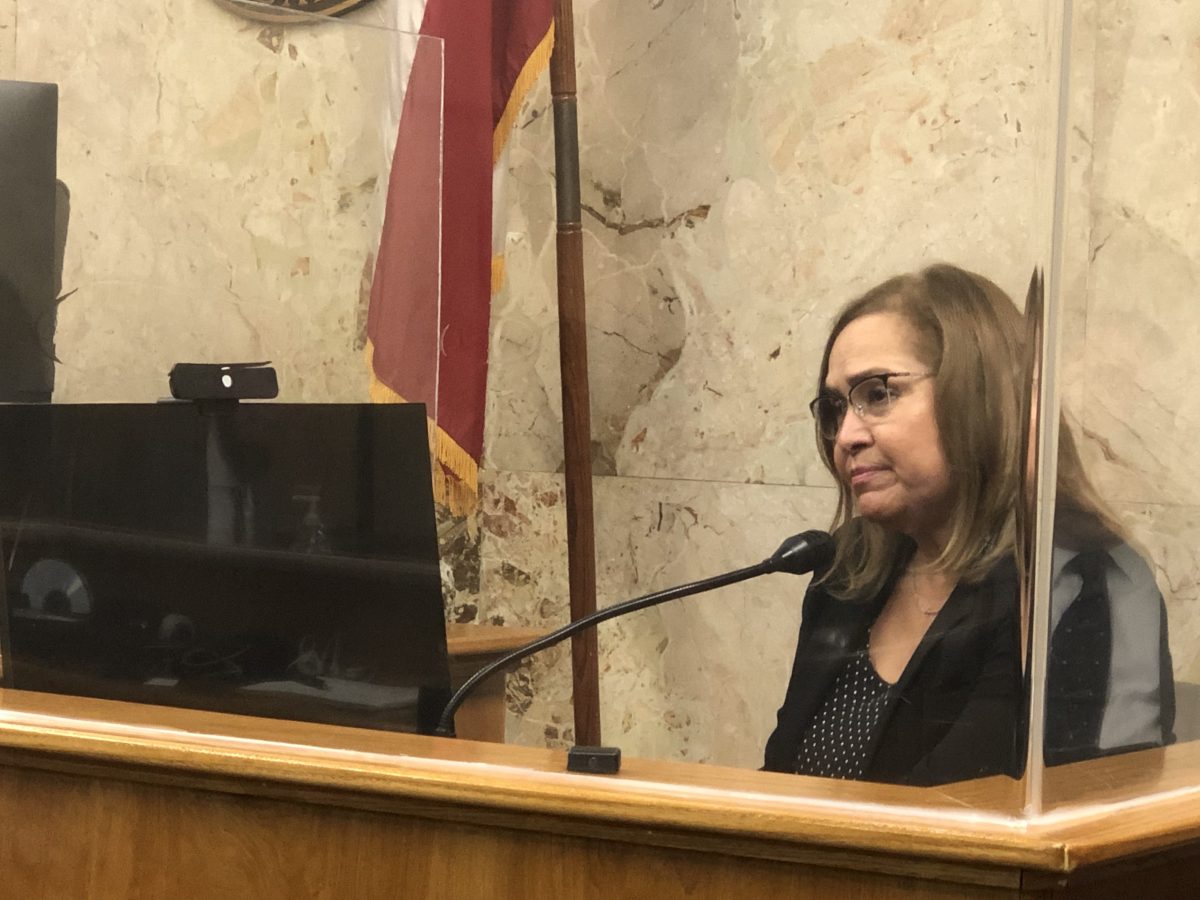 Michael J. Garza, who could barely contain his contempt for the allegations, pushed back hard.

“I cited a case that talked about society’s interest. And the citizens of the city of Edinburg had an interest. They have a mayor who’s supposed to represent that interest but instead is more concerned with his own,” Michael J. Garza said. “And that interest is to have a government that is elected free of fraud.”

“Nothing in any of the testimony comes remotely close to suggesting that there’s a conflict of interest,” Michael J. Garza said. “And that somehow Mr. Molina’s rights are infringed upon because of this imaginary statement that they want to impute some kind of a bias from some kind of made up political war on the district attorney.”

Valdez sided with the District Attorney’s Office. The case may head to trial in the spring.