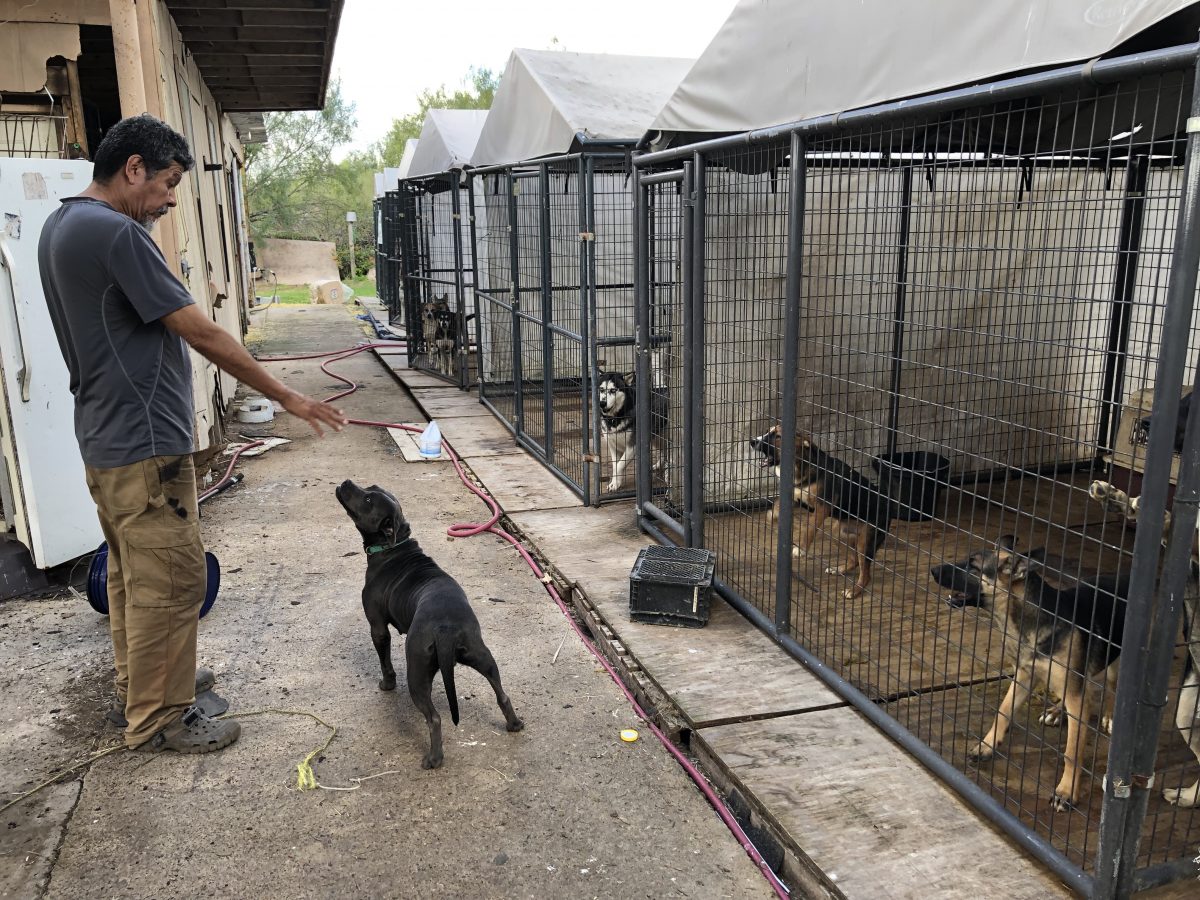 The Palmhurst City Council wants a self-styled “animal rescue” organization to stop operating from a house on Stewart Road.

Members of the Franklin All Animal Rescue Team — an organization managed by Maria “Marisa” Wade, 49, of Palmhurst and Jesus Meave, 61, of Palmhurst — keep dozens of dogs in homemade kennels near the house.

The Palmhurst Police Department cited Meave in June for operating a dog kennel within 50 feet of nearby homes, but he didn’t shut down. During a meeting on Friday morning, the City Council authorized the city attorney to take legal action.

“I’m an animal lover. I have four dogs myself,” said police Chief Michael Vela. “And we just want to make sure that the person who owns the location or is running it, that he goes by the rules. It’s just like any other city, any other place in the state of Texas.”

Meave said he founded the Franklin All Animal Rescue Team, which is known to supporters as “FAART,” in 2014.

At the time, Meave lived in McAllen. He built kennels on property near the Boeye Reservoir and started accepting dogs.

He also had problems with the McAllen Police Department, which arrested Meave on theft and gambling charges in September 2016. 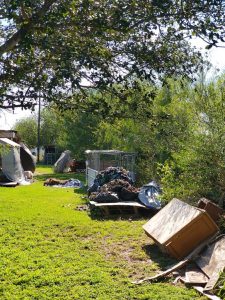 Piles of trash at the Franklin All Animal Rescue Team property on Stewart Road in Palmhurst. (Photo courtesy of Paula Mendez.)

Prosecutors dropped the theft charge. Meave pleaded not guilty to the gambling charges, which remain pending.

The gambling charges resulted from a poker game and slot machines he stored for a friend, said Meave, who denied that he did anything wrong.

McAllen also received a complaint against Meave that accused him of participating in dog fighting. Meave denied the allegations, which never resulted in criminal charges.

Wade and Meave incorporated the Franklin All Animal Rescue Team in June 2019, according to documents filed with the Texas Secretary of State’s Office. After they incorporated, Meave moved from McAllen to Palmhurst.

“We came over here for a couple of reasons. One, because it was bigger. Two, because I was tired of fighting,” Meave said. “I mean, I was winning. But it’s not about winning. It takes time. It’s frustrating.”

They picked a three-acre property on Stewart Road between 2 Mile Road and Buddy Owens Boulevard.

“Initially, everybody ignored us,” Meave said. He built more than a dozen kennels and started accepting injured, stray and unwanted animals.

Along with dogs and cats, Meave said he cared for a pig, turtles, chickens, a rabbit and a horse.

During an interview on Thursday, neither Meave nor Wade said they knew how many animals were on the property.

Unlike other animal rescue organizations, Meave said the Franklin All Animal Rescue Team didn’t shut down when the pandemic started. As a result, they became inundated with animals.

“And I told them, I said: ‘Yes, we got out of hand because it was during the COVID thing. Nobody was doing nothing for them. Everybody was shutting down. So we picked up the slack,’” Meave said.

The concerns, though, didn’t go away.

Officers cited Meave on June 9, 2021, when they accused him of building dog kennels within 50 feet of a residence, operating a business without a permit, failing to maintain a premises where livestock is kept and keeping “any dog in the city which by loud, frequent or habitual barking or howling shall cause annoyance and disturb the peace and quiet of any person.”

Meave pleaded not guilty and requested a jury trial. 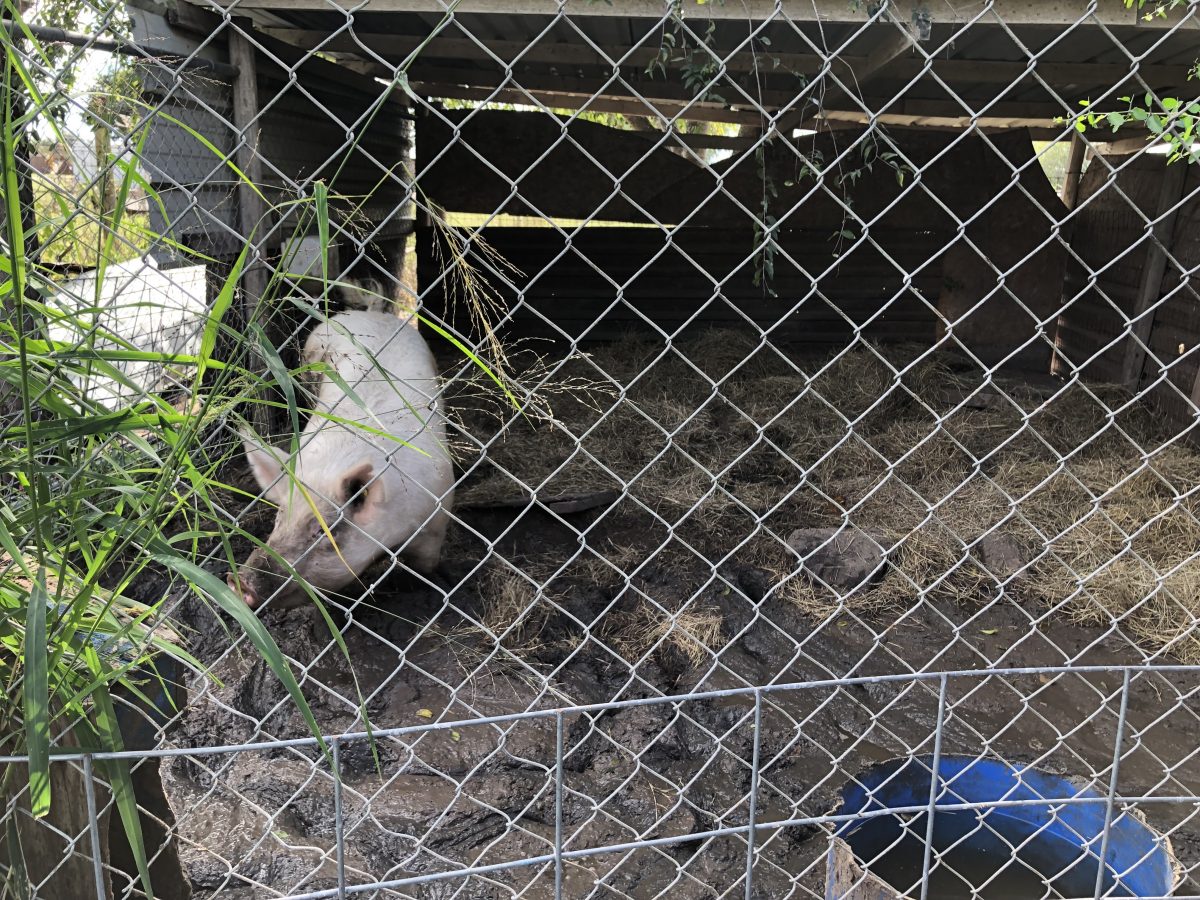 A pig at the Franklin All Animal Rescue Team property on Stewart Road in Palmhurst. (Photo by Dave Hendricks / The Progress Times)

“And I almost got the idea that they were willing to pay a monthly fine, you know, and just keep operating,” said City Attorney Darrell Davis.

Davis asked the City Council for permission to take legal action, which may include a lawsuit and a request for a temporary restraining order.

As part of the lawsuit, Davis asked people who live near the Franklin All Animal Rescue Team property to sign affidavits. They agreed.

“The smell is horrible,” said Paula Mendez, 47, of Palmhurst, who lives next door. “And that’s my concern: The smell.”

Mendez said the smell of dog poop and trash makes her backyard unpleasant. She had to stop barbecuing and keep children indoors.

The dogs bark at all hours, Mendez said, waking her up early and preventing her from falling asleep.

“I’m glad that the city is already taking action,” Mendez said. “Because it’s time for them to move somewhere else.”