Former Superintendent Alda T. Benavides became the president of the La Joya school board on Wednesday.

Benavides — who retired from the La Joya Independent School District in June 2019 and joined the school board in November 2020 — accepted the position during a meeting on Wednesday night.

“I’m still learning my role as a board member, because it is different from being a superintendent,” Benavides said. “But I’m hoping that I can serve the district well in that capacity.”

Benavides replaced Trustee Oscar “Coach” Salinas, who had been the board president since November 2020.

“I think that she’s going to be an excellent president,” Salinas said. “Her leadership skills are there. She’s a very big supporter of our students — which is very important — our parents, our staff.” 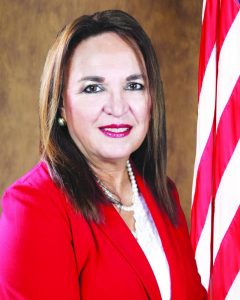 Benavides graduated from La Joya High School in 1971 and enrolled at Pan American University, where she earned a bachelor’s degree in elementary education, according to her personnel records, which La Joya ISD released under the Texas Public Information Act. She worked for the McAllen Independent School District and the Region One Education Service Center before accepting a job with La Joya ISD in 1984.

She worked her way up, winning promotions to assistant principal, principal and assistant superintendent. After two decades with the district, Benavides took the top job in September 2006.

She navigated several political shifts before retiring in June 2019.

Benavides, though, didn’t stay retired. In 2020, she ran against school board Trustee Claudia Ochoa and Leonora Garcia, another retired educator, for Place 4.

Benavides won about 43% of more than 19,400 ballots cast in the three-way race, according to results published by the Hidalgo County Elections Department. She joined the school board that November.

With her background in education and deep knowledge of the district, Benavides instantly became a leader on the board. She asks probing questions during board meetings, offers constructive feedback to administrators and frequently requests additional information to better understand key issues.

When the school board met Wednesday to select a new president, many believed that Benavides would be a strong contender to replace Salinas.

Salinas, the outgoing president, and Alex Cantu are the two longest-tenured members of the school board. Nereyda Cantu suggested they set aside political considerations and make Alex Cantu the next board president.

“I think he should be given the opportunity,” Nereyda Cantu said. “And the rest of us respectfully wait our turn.”

Nobody seconded her motion. After it died, Salinas solicited other nominations.

While her title will change, Benavides said her role on the school board will not.

“I have mixed feelings. I don’t want my role to change very much. I want to continue to be focused on enhancing the opportunities for the students,” Benavides said. “And as board president, I hope I can continuously lead in that direction.”