Whether or not Brandon really planned to release a lion in La Joya depends on who you ask.

Brandon M. Vergara, 20, of La Joya said he made up the story in July, when officers demanded to know why he crossed the border with nearly $11,000 in cash. 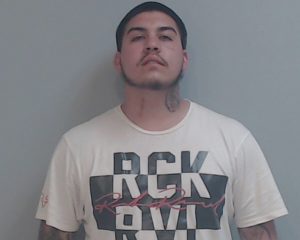 Brandon M. Vergara, 20, of La Joya claimed he wanted to buy a lion and release it in the woods near Military Road. (Photo courtesy of the Hidalgo County Sheriff’s Office.)

Vergara claimed he wanted to buy a lion and release the apex predator in the woods near La Joya.

“I was just bullshitting with them,” Vergara said.

Officers, however, apparently took him seriously.

Vergara had a warrant for aggravated assault. On the way to jail, police Officer Erik Heredia asked him about the money.

“Officer Heredia stated that Mr. Vergara blurted out to him that the money that was confiscated was going to be used to buy a Lion in Mexico,” according to an affidavit filed by an investigator. “Mr. Vergara told Officer Heredia that once the Lion grew to be mature, he was going to release it into the wooded area by Military Rd in La Joya, Tx which is near his residence.”

Vergara went to Mexico to buy a baby lion, Gonzalez said, and planned to pay cash.

“But when he went there, it was too big for him,” Gonzalez said. “So he kind of backed off.”