“He has a passion for his hometown,” said Alamo police Chief Richard Ozuna, who headed the Sullivan City Police Department from 2016 to 2020. “He’s a good officer.”

Mayor Alma Salinas referred an inquiry about Cortes to City Attorney Frank Garza, who declined to comment. Garza also cautioned other members of the City Council against discussing the decision.

“I’ve known Rey for a long time,” said Hermelinda Salinas of Sullivan City, who headed a now-defunct community organization called the United Committee. “He’s a very good person. He’s very straight and he doesn’t — as I see it — I’ve never seen him in a corrupted way. He does his job. He’s very professional about it.” 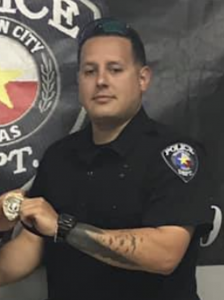 Reynaldo Cortes. (Photo courtesy of the city of Sullivan City.)

He applied for a dispatcher position in April 2010, according to personnel documents released under the Texas Public Information Act. Sullivan City hired Cortes on the spot.

Cortes completed his classes at Kaplan College in March 2011, when he graduated with an associate’s degree in criminal justice.

Sullivan City provided Cortes with equipment, including a duty belt, holsters and handcuffs, for his classes.

After he graduated from the academy, Cortes returned to Sullivan City and requested a promotion to police officer.

“Being a current employee for the Sullivan City Police Department, I am very appreciative for the opportunity I received when I was hired,” Cortes wrote in an undated letter of intent. “I am grateful and have a strong feeling of pride and joy in working for the city and department.”

Cortes became a full-time police officer in June 2013. His law enforcement career, though, had a rocky start.

At 3:25 a.m. on March 3, 2014, the Mission Police Department arrested Cortes on suspicion of driving while intoxicated.

“I know you have been drinking,” a Mission Police Department officer told Cortes, according to the police report. “How much did you have to drink?”

Cortes said: “A six, sir,” according to the police report. A passenger in the car told officers that “she had told Mr. Cortes to let her drive but he told her no.”

What happened to the drunken driving case against Cortes remains unclear.

Mission, however, submitted the police report to the Texas Commission on Law Enforcement, which released the documents under the Public Information Act.

It wasn’t the first time Cortes had a problem with alcohol.

In September 2011, the Palmview Police Department arrested Cortes for public intoxication. He paid a $436 fine.

Cortes also had problems at the Sullivan City Police Department.

In July 2015, the city suspended Cortes for three days without pay because he failed to stop another officer from taking stray bits of marijuana from the evidence room.

Sullivan City disciplined Cortes again in November 2015, when he witnessed a man who “appeared to be intoxicated” shooting a pistol into the air, according to the internal investigation, which Sullivan City released under the Public Information Act. Cortes told the man to stop but didn’t report the incident.

The city suspended Cortes for one day without pay.

Cortes remained employed by Sullivan City until October 2016, when he abruptly resigned.

“I know it’s at a very short notice and I apologize but due to family issues and financial problems I’ve decided to take an opportunity in applying in a non-law enforcement job,” Cortes wrote in his resignation letter.

Cortes returned to Sullivan City in 2018 and received a promotion to sergeant in 2020.

“He’s a young guy, he’s got a lot to learn, but he’s been in this field almost all his life,” said former Sullivan City police Inv. Juan Pruneda, who left for the La Joya Independent School District Police Department in 2020.

Pruneda and other police officers helped train Cortes after he graduated from the academy.

Unlike officers from other parts of Hidalgo County, who spend a few years in Sullivan City before leaving for better-paying jobs, Cortes stuck around.

“It’s his community as well. He’s lived there all his life,” Pruneda said. “So I guess he really loves his town.”