Jose Luis Morin, 41, of Mission — the former executive director for Student Services — accepted $28,000 during a scheme that involved Performance Services Inc., an Indiana-based company that specialized in “energy savings” contracts.

With assistance from Morin, the company secured a major contract with the La Joya Independent School District in 2019.

“During said time, the defendant was offered bribes in exchange for his official support and recommendations to the La Joya Independent School District board in support of the energy savings contract, job order contracts, the purchase of radios, and pay applications,” said Assistant U.S. Attorney Roberto “Bobby” Lopez Jr., who read the factual basis for the plea when Morin appeared in court Monday morning.

“I want to thank La Joya I.S.D. for the opportunities it provided to me through out (sic) my years of employment,” Morin wrote in his resignation letter.

The case against Morin is part of a major federal investigation that focuses on public corruption in western Hidalgo County. Morin is the sixth person to plead guilty:

* Businessman Jaime A. Rodriguez of Edinburg pleaded guilty to a federal bribery and money laundering charge on Jan. 12.

* Peñitas Public Works Director Andres “Andy” Morales pleaded guilty to conspiracy to defraud the United States and making a false statement during the purchase of a firearm on Jan. 21.

All six waived indictment and pleaded guilty to a type of charging document called a criminal information, which is typically used when a defendant is cooperating with prosecutors.

Morin communicated with “Person A,” an employee of “Company A,” by iMessage.

They discussed how to “facilitate the selection of Company A for an energy savings contract and the purchase of radios,” Lopez said.

Morin provided Person A with information and drafted school board agenda items for Company A. He also supported the contract with Company A and made sure payments were processed in a timely manner. 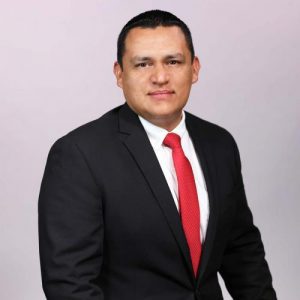 “On or about July 24, 2019, the La Joya Independent School District board voted to approve job order contracts, the purchase of radios and other contracts associated with the energy savings project proposed by Company A,” Lopez said.

Lopez didn’t identify Person A or Company A by name. The company, however, is clearly Performance Services Inc.

When the school board met on July 24, 2019, trustees approved a contract with Performance Services Inc. and the purchase of a radio communication system.

“Performance Services, Inc (PSI) has no knowledge of any potential misbehavior by Jonathan Blackwell nor any other employee except for the information provided in the recent Federal Indictment,” according to a statement the company released in January. “PSI promotes and lives by our Guiding Principles and Fundamentals and our culture is based on these beliefs. In 23 years of operations, there have been no accusations that PSI nor any of our employees have ever acted in an illegal manner on any of our past 604 projects. PSI has not nor will we tolerate any illegal behavior by our employees, partners, or subcontractors.”

In exchange for his assistance, Morin received “at least $28,000 in bribe proceeds,” Lopez said. The factual basis for the plea didn’t provide any details about the person or people who bribed him.

While he awaits sentencing, Morin must avoid the “excessive” use of alcohol, surrender his passport and submit to random drug testing. He faces a maximum of five years in federal prison.