This article appeared in the Feb. 4 issue of the Progress Times.

The city of Mission welcomed the sister cities of Santiago, Nuevo Leon, General Treviño, Nuevo Leon, San Nicolas, Nuevo Leon, and Martinez de la Torre, Nuevo Leon to the Mayor’s International Brunch last Saturday morning. The brunch, a tradition that goes back to the 1970s, emphasized economic and cultural aspects, highlighted the citrus industry, and encouraged international relations between the cities beyond our border.
More than 400 leaders from throughout the Rio Grande Valley, the state of Texas, and Mexico were in attendance that morning, greeted at the Mission Event Center entrance by the Sharyland High School Mariachi – Cascabel.

Mayor of Santiago David de la Peña and Mayor of Mission Dr. Armando O’cana sign the start of the international relations of their cities. Photo courtesy of the city of Mission.

La Joya Commissioner Ezequiel Garza, McAllen Mayor Javier Villalobos, Palmhurst Commissioners Israel Silva and Jaime Aranda , Rio Grande City Commissioner Alberto Escobedo, Sullivan City Mayor Alma Salinas, MCISD and Sharyland ISD Board Members, along with State Representative Sergio Muñoz Jr. were attendees from the Valley.
“It’s a really special chance for us to celebrate our international friendships and also to highlight our citrus industry, our culture, and our city’s very long and distinguished history,” said Media Relations Director Roxanne Lerma. “We are proud to have strong international friendships that contribute to our economy here in Mission.”
Humberto Garcia, Mission’s Media Relation Officer, greeted attendants in Spanish.
“Here, we speak both English and Spanish, but overall, we speak the language of friendship,” said Garcia.
The Mission Police & Fire Department Color Guards presented the flags and along with the national anthems for both the United States and Mexico. A Vietnam War Veteran, Juan Roberto Salinas, spoke before leading the invocation.
“Your presence here is important,” Salinas said to the attendees, especially those from outside of the Valley. “Everyone of Mission should be proud.”
Greater Mission Chamber of Commerce Chairwoman Veronica ‘Ronnie’ Ontiveros explained the cruciality and importance of business for Mission. The GMCC, days prior, signed an agreement with the canaco of Nuevo Leon. The canaco is an institution of public interest that brings together companies dedicated to commerce, services, and tourism. The canaco is an intermediate body aimed at ensuring that society has a commercial sector that meets the needs of goods and services of citizens.
“My dearest Mexico, we carry you in our blood, in our hearts always. It is our culture, and this we both have in common,” said Ontiveros.
Mayor Dr. Armando O’cana then approached the podium to greet the international sister city mayors.
“Today is history for us,” said O’cana. During this year’s Mayoral International Brunch, the city of Santiago of Nuevo Leon would be signing as a sister city with Mission for the first time.
The mayor also spoke of the city’s citrus industry and Texas Citrus Fiesta’s 90th anniversary. “We are inviting you, Mexico, to come to do business in Mission.” He then continued after listing various city achievements.
“The citrus industry has played a vital role in the history and the development of our community. The citrus industry was and is the foundation of Mission,” said O’cana, inviting the sister cities to aid in produce and agriculture.
“We cannot prosper without you, international friends, and to you our citrus growers, who are the backbone of our community,” O’cana said.
Keynote Speaker, Commissioner Julian Alvarez III of the Texas Workforce Commission spoke of economic and educational progress and projects happening in the city, such as coding programs for high school girls, welding programs, and more. The Mission Economic Development Corporation in Hidalgo County was awarded $490,268 for the Cyber Mission program, which provides high-quality information on technology, cyber-security career training, and job placement support throughout the Valley.
Next, the sister cities gave presentational videos showcasing life in their municipalities. Each mayor gave a few words after signing the sister city agreement.
“It is an honor to be part of the joining of two cities, two cultures,” said Santiago Mayor David de la Peña. “I am certain that with this interrelationship, we would go to the next frontier, to the horizon, and reach goals in related projects.”
Maribel Hinojosa Garcia, Mayor of General Treviño, Nuevo Leon, said the goal for both cities is to reach goals that are crucial to citizens of both cities.
“We are a very hard-working municipality,” said Garcia. “I am grateful for everyone who lives in the United States who has roots from General Treviño.”
Mayor Daniel Carillo Martinez of San Nicolas, Nuevo Leon shared some words at the podium. 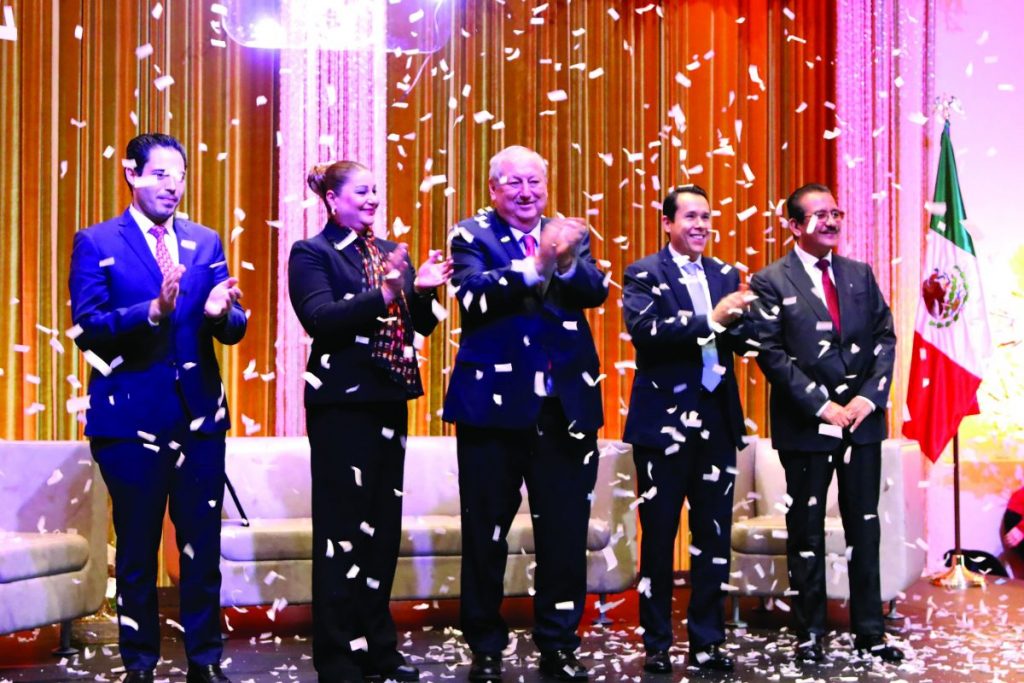 “Just is the invitation Mayor O’canas has made, one that I am grateful for. The communities of San Nicolas are grateful for this mandate,” said Martinez. “Empathy, friendship…and love: with those three things alone, the greatest of cities will be made.”
Mayor of Martinez de la Torre, Rodrigo Calderon Salinas, spoke last.
“Aside from the fact of us doing business with everyone here, may you know you are welcome to go any time,” said Salinas.
“We thank you for coming to our grand city,” said O’cana. All of the sister city mayors joined Mayor Dr. O’canas on stage for the finale: a confetti explosion.