The city of Mission removed a City Council candidate from the ballot Thursday after questions surfaced about his voter registration.

“After seeking a legal opinion from the Texas Secretary of State’s office you are not an eligible candidate for the City of Mission May 7, 2022 election due to your voter registration status being changed from McAllen, Texas to Mission, Texas on January 24, 2022,” according to a letter Martinez sent to Vargas on Thursday morning.

Vargas said he planned to challenge the decision in court.

“By the city charter, I am by all means qualified,” Vargas said. “But he’s clinging on to this state rule, which he’s disqualifying me on.”

Vargas moved from McAllen to Mission about a year ago but didn’t update his voter registration until Jan. 24, three days before he filed a ballot application for City Council.

Whenever a voter registration is updated, the change “becomes effective on the 30th day after the date the application is submitted to the registrar,” according to the Texas Election Code.

That created a problem for Vargas.

According to the city charter, a candidate for City Council must be a “qualified voter of the State of Texas.” The Election Code, however, requires candidates to be “registered to vote in the territory from which the office is elected” on the filing deadline. 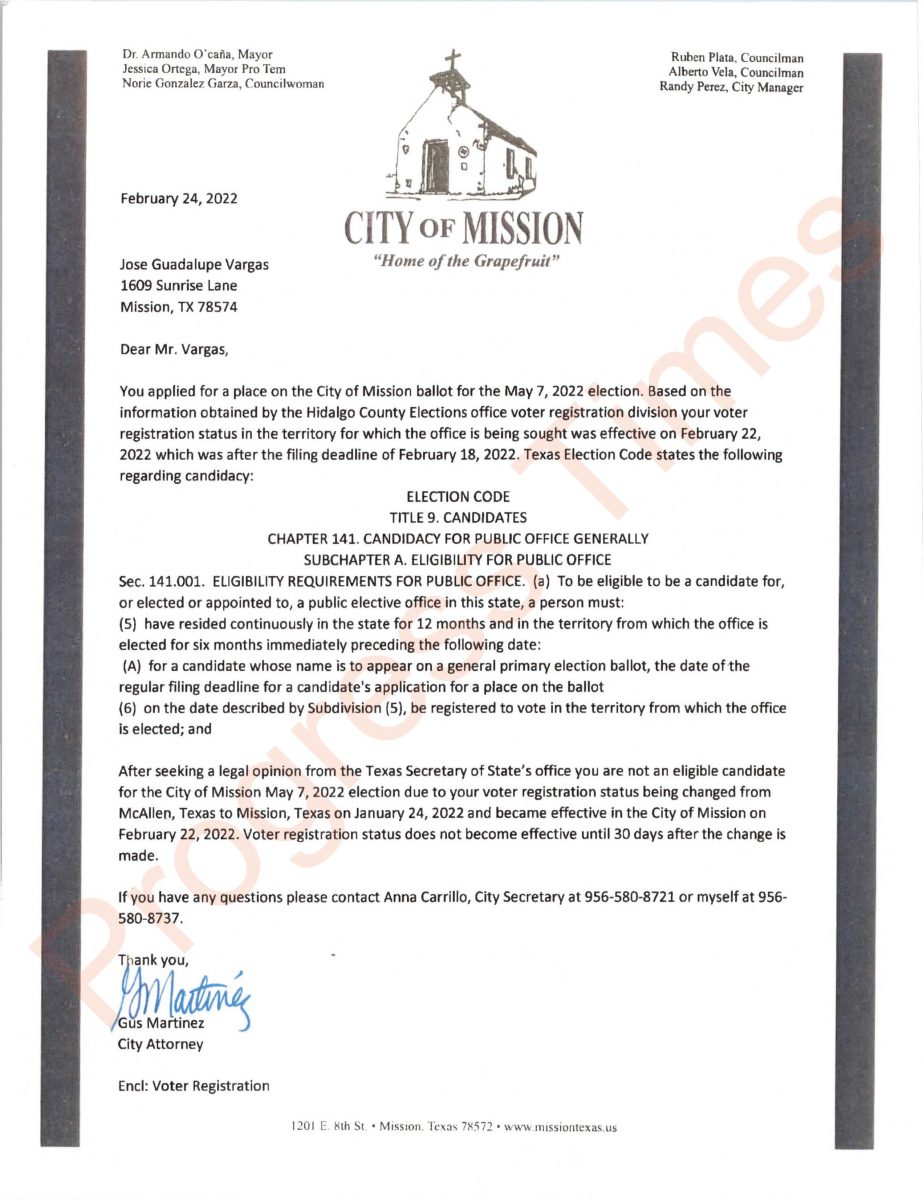 State law trumps the charter, Martinez said, and Mission must use the stricter requirement in the Election Code.

Nobody at City Hall noticed the problem on Jan. 27, when Vargas filed his ballot application.

“It was not a candidate who is running for that same position,” Carrillo said.

When she returned to work Tuesday morning, Carrillo notified Martinez about the situation and contacted the Secretary of State for an opinion.

“The applicant changed his address on his voter registration on January 24 and is therefore valid from 02-22-2022,” Carrillo wrote to the Elections Division. “I was asked if this will prevent him from being on the ballot based on his registration being effective after the filing deadline.”

Carrillo called the Elections Division on Wednesday to follow up, but she didn’t receive a response. She called again on Thursday and reached an attorney, who told her Vargas had missed the deadline.

The Elections Division responded in writing on Saturday, when an attorney confirmed that Vargas had missed the deadline.

Vargas said he believed Martinez had known about the situation for two weeks but didn’t contact him until Thursday, which prevented Vargas from running as a write-in candidate.

“The objective has always been to get me off the ballot,” Vargas said.

Vargas said people had promised to support him during the next election if he withdrew from the race.

“I have been asked numerous times to step down, and they will assure me a win later,” Vargas said. “But from the very beginning, my stance has been: Let the people choose.”

Vargas said he’d already spent about $35,000 on his campaign, which included the purchase of signs and consulting fees.

“It’s just not right,” Vargas said, adding that he’d spoken with a lawyer about filing a lawsuit.

Martinez said he informed Vargas about the situation as soon as Mission received a response from the Secretary of State.

“The lesson is that the candidates need to be responsible for themselves,” Martinez said.