Mayor Isidro Casanova and the City Council thanked Julianita R. Sabala, 71, of La Joya for her “outstanding and dedicated service” during a meeting last month.

“I’ll always be here if you all ever need anything from me,” Sabala told the City Council. “But my husband comes first. And my family.”

Sabala accepted the job in June 2000, when Bill Clinton was president and the first season of “Survivor” had just debuted in the United States.

The job paid $7 per hour, $1 more than Sabala made at the La Joya Housing Authority. Her boss, housing authority Executive Director Juan Jose “J.J.” Garza, warned her about city politics.

“He said: ‘If you go to the city, the new administration’s going to come in. They’re going to fire you,’” Sabala said, recalling the conversation. “I said: ‘You know what J.J., if it happens, it happens. Wherever I go, I’m going to work. And I’m just going to work and do my best.’” 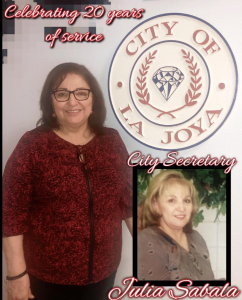 And she did — under Mayor William “Billy” Leo, Mayor Jose A. “Fito” Salinas and Casanova.

“The political side of it was really a little bit stressful at times, but I stuck to my job,” Sabala said. “My job was to take care of the council. Because the council was elected by the people. That’s who I worked for: For the people’s choice. That’s how I looked at it.”

Politics, however, wasn’t the only problem Sabala encountered at City Hall.

A series of corruption scandals resulted in charges against her former boss, City Administrator Mike Alaniz, and Salinas, who served two terms as mayor.

“It’s hard to deal with because you see the good that they’ve done,” Sabala said. “And then these bad things happen.”

Sabala knew them not just as one-dimensional public officials but as real people with complex personal stories.

“It’s very hard to even explain it,” Sabala said. “But it hurts that not everybody understands.”

Sabala also had her own brush with the law.

In December 2005, a grand jury charged Sabala with tampering with a governmental record. Sabala had signed her daughter’s name on an application for a mail-in ballot.

She pleaded guilty. A judge placed her on community supervision for six months.

Sabala described the experience, which made the news because of her position at City Hall, as the worst moment of her career. The city, though, stuck by Sabala and the misdemeanor case gradually faded from memory.

“She’s an amazing woman,” City Councilwoman Laura Mendiola Macias said on Feb. 22, when the City Council thanked Sabala for her service to La Joya. “She’s done wonders for this community.”

Sabala had talked about retirement for years, but the idea of City Hall without her didn’t seem real for many until her resignation letter arrived.

Casanova choked up when reading a plaque that described her dedicated service to La Joya.

“As you retire, may you be proud of all the work that you have done, the person that you are,” Casanova said. Overcome with emotion, he paused before adding: “You have set the example to be followed. Best wishes from all of us at city of La Joya. And so, your adventure begins.”