Mission City Council candidate Joe Vargas is back on the ballot.

The city removed Vargas from the ballot in February, when City Attorney Gus Martinez determined that Vargas had missed the deadline to change his address from McAllen to Mission. Vargas responded with a lawsuit.

“We’re going to abide by the court’s order,” Martinez said. “And we feel it’s fair.”

“My position remains the same,” Vargas said, adding that citizens of Mission should be able to vote for whoever they want.

Jose Guadalupe Vargas — who co-owns Apple Pharmacy with City Councilman Alberto “Beto” Vela — moved to Mission about a year ago. 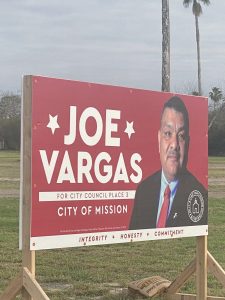 Mission City Council candidate Joe Vargas estimated that he spent $35,000 on his campaign. (Photo by Savannah Rendon / The Progress Times.)

When a voter registration is updated, the change takes effect “on the 30th day after the date the application is submitted to the registrar,” according to the Texas Election Code.

That created a big problem for Vargas.

His updated address didn’t take effect until Feb. 22, four days after the filing deadline. Mission removed Vargas from the ballot.

“After seeking a legal opinion from the Texas Secretary of State’s office you are not an eligible candidate for the City of Mission May 7, 2022 election due to your voter registration status being changed from McAllen, Texas to Mission, Texas on January 24, 2022,” according to a letter Martinez sent to Vargas on Feb. 24.

Vargas challenged the decision in court.

Unlike the Election Code, the city charter doesn’t require a candidate to be registered to vote in Mission by the filing deadline. The charter only requires a candidate to be a “qualified voter of the State of Texas.”

Attorneys for Vargas also challenged the way Mission removed him from the ballot.

“The City Secretary is the sole filing authority for elections,” according to the lawsuit, which cited the Election Code. “City Attorney Gus Martinez does not have authority to make a finding disqualifying a candidate. Therefore, since the proper authority which is the City Secretary did not make a finding disqualifying Plaintiff Joe Vargas, Plaintiff Joe Vargas must be allowed to run as a candidate in the May of 2022 Election.”

The judge signed a temporary restraining order against Mission on March 2 and sent the case to mediation. Vargas and the city struck a deal on March 9.

The judge approved the agreement on Friday.

The winning candidate will replace City Councilwoman Norie Gonzalez Garza, who is running for mayor.